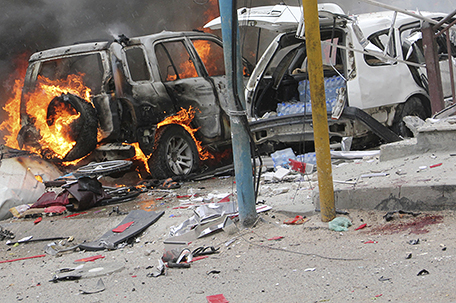 ABOVE PHOTO:  Burning vehicles outside Midnimo mall after a car bomb attack on a popular mall in Mogadishu, Somalia, Sunday, July 30, 2017. A police officer says a car bomb blast near a police station in Somalia’s capital has killed at least five people and wounded at least 13 others. Most of the victims are civilians. The Somalia-based extremist group al-Shabab often carries out deadly bombings in Mogadishu. (AP Photo/Farah Abdi Warsameh)

MOGADISHU, Somalia — The U.S. military said Monday it carried out a drone strike in Somalia that killed a member of the al-Shabab extremist group, while Somalia’s government said it believes the strike killed a high-level al-Shabab commander responsible for several deadly bombings in the capital.

The al-Qaida-linked al-Shabab is the deadliest Islamic extremist group in Africa.

The U.S. statement said the airstrike was carried out in coordination with regional partners “as a direct response to al-Shabab actions, including recent attacks on Somali forces.” The statement said no civilians were killed.

A statement by Somalia’s information ministry said the government believes that Ali Mohamed Hussein died in the operation coordinated with “international partners.”

Ali had served as the extremist group’s shadow governor for the capital, Mogadishu, and had been one of the group’s most outspoken officials.

“This individual was part of an al-Shabab network responsible for planning and executing several bombings and assassinations that resulted in the deplorable death of numerous innocent civilians in Mogadishu,” the ministry statement said.

A Somali intelligence official said at least one missile struck a car in which the al-Shabab leader was travelling. The official spoke on condition of anonymity because they were not authorized to speak to the press.

The U.S. military in early July said it carried out an airstrike against al-Shabab in Somalia and was assessing the results. The airstrike followed one in June that the U.S. said killed eight extremists at a rebel command and logistics camp in the south.

The Somalia-based al-Shabab earlier this month mocked Trump for the first time in a video that called him a “brainless billionaire.” The extremist group also has vowed to step up attacks in Somalia after the president elected in February declared a new offensive against al-Shabab, which continues to carry out deadly attacks in Mogadishu.

The extremist group also has carried out deadly attacks in neighboring countries, notably Kenya, calling it retribution for sending troops to Somalia to fight al-Shabab.