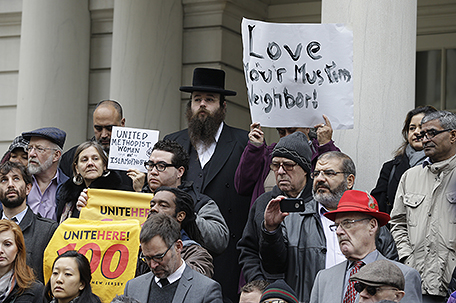 NEW YORK — A severed pig’s head was left outside a mosque in Philadelphia. An Islamic center in Florida was defaced. A Sikh temple in California was vandalized by someone who mistook it for a mosque and left graffiti that included a profane reference to the Islamic State group.

Advocacy groups believe there has been a spike in anti-Muslim incidents across the United States in recent weeks that can be linked to last week’s mass shooting in California and the inflammatory rhetoric of Donald Trump and other Republican presidential candidates. And they say that Muslims are fearful the backlash could lead to further harassment and violence.

“The spike began with the Paris attacks and has intensified with what happened in San Bernardino and now with what Donald Trump is proposing,” Ibrahim Hooper, lead spokesman for the Council on American-Islamic Relations, said Wednesday. “I have never seen such fear and apprehension in the Muslim community, even after 9/11.”

It’s hard to measure the extent of the problem. The FBI, which keeps statistics on hate crimes committed nationwide, counted 154 bias offenses against Muslims last year. Data for 2015 is unavailable.

The Anti-Defamation League, relying partly on complaints and partly on media reports, said it has logged more than three dozen incidents since the Nov. 13 terror attacks in Paris that left 130 dead.

“We’re talking at least three dozen that we’re aware of, and I’m sure there are many more incidents that haven’t been reported,” said Oren Segal, the director of the ADL’s Center on Extremism.

“With legit terror attacks and the public discourse about them, it has created an atmosphere ripe for these types of stereotypes and incidents,” Segal said. “People are exploiting them.”

Segal wasn’t able to provide a comparison point to the same period last year, but said that the pace of incidents appears to have picked up since the Dec. 2 shooting in San Bernardino that killed 14 people and injured 21 others. The suspects, Syed Rizwan Farook, and his wife Tashfeen Malik, later died in a gun battle with police.

That shooting prompted Trump on Monday to propose a complete ban on Muslim immigrants into the U.S., triggering a fierce debate that has dominated the national political conversation. Advocates say other GOP presidential candidates also have fueled anti-Islamic sentiment, including Ben Carson who suggested a Muslim should not be president and Rick Santorum who questioned whether the U.S. Constitution protected Islam.

“The ground had been primed for this kind of harassment by the ongoing demonization of Islam,” said Hooper. “After 9/11 there were hate crimes on the edges of society, but now it’s in the mainstream with the leading Republican presidential candidate saying Muslims are not wanted in America.”

Among the incidents reported since the California shooting:

– In Philadelphia, police have stepped up patrols around houses of worship after a severed pig’s head was left outside the Al Aqsa Islamic Society. Police are continuing to investigate; no arrests have been made.

-A Florida man was arrested after authorities said he vandalized the Islamic Center of Palm Beach in North Palm Beach, Florida, on Friday. More than a dozen windows were broken.

-The imam of an Islamic center in St. Louis, Missouri, told a local television station that someone claiming to be a former Marine left a threatening voicemail message on the mosque’s answering machine on Saturday. Fox 2 TV (KTVI), which obtained a copy of the recording, reported that the man said he “killed a lot of Muslims” and, using expletives, said he would decapitate Muslims.

Sometimes it’s hard for authorities to decipher whether the suspects are fueled by bigotry or whether there’s something else in play.

The New York Police Department said Piro Kolvani, 55, walked into a food market in Queens Saturday, had a brief verbal exchange with the store clerk and then attacked him. The clerk, Sarker Haque, 53, told WPIX-TV his assailant shouted “I kill Muslims,” before punching him in his left eye.

In a short, disjointed phone interview Wednesday, Kolvani said he was trying to buy something in the store. When asked if he said anything negative about Muslims during his exchange with the clerk, he shouted “No! No! No!” and then hung up on a reporter. Kolvani was arrested on an assault charge but the Queens District Attorney’s office has not determined if he’ll be charged with a hate crime.

Court records show Kolvani, a resident of Jacksonville, Florida, was arrested there after allegedly pulling his pants down in front of a Walmart store on Nov. 21.