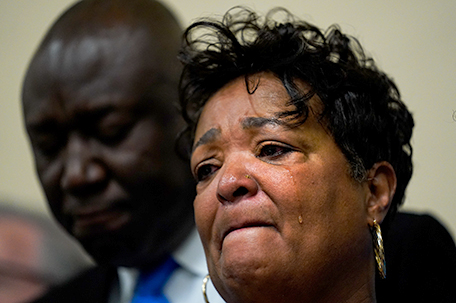 ABOVE PHOTO: Angela Crawley, the daughter of Ruth Whitfield, a victim of shooting at a supermarket, speaks with members of the media during a news conference in Buffalo, N.Y. on May 16, 2022. The NAACP, the nation’s oldest civil rights organization said it will propose a sweeping plan meant to protect Black Americans from white supremacist violence, in response to a hate-fueled massacre that killed 10 Black people in Buffalo, New York last weekend. (AP Photo/Matt Rourke, File)

By Aaron Morrison and Kat Stafford

In a plan first shared with The Associated Press, the NAACP suggests a policy approach to stopping future acts of anti-Black domestic terrorism that involves law enforcement, business regulation and gun control. The proposal points to measures that could be taken up immediately by the Department of Justice and the Federal Trade Commission.

Specifically, the plan calls for holding accountable any corporation that is complicit in the spread of bigotry and racism through news media and on social platforms, for enacting gun violence prevention measures that keep mass-casualty weapons out of the hands of would-be assailants and for reforming police practices so Black Americans experience the same de-escalation tactics often used to peacefully apprehend murderous white supremacists.

Saturday’s premeditated attack by an avowed racist on Black shoppers at the Tops Friendly Market in Buffalo made it clear that “democracy and white supremacy cannot co-exist,” NAACP President and CEO Derrick Johnson said.

He was scheduled to meet with Attorney General Merrick Garland last Friday, a spokesperson for the civil rights group said.

The NAACP revealed its proposal as Black leaders across the country fret about inaction on the part of elected leaders to prevent domestic terror attacks by white supremacists against Black Americans. From Tulsa, Oklahoma, and Birmingham, Alabama, to Charleston, South Carolina, and Charlottesville, Virginia, generations of Americans have not seen the rising death toll from such violence met with urgent legislation to prevent or reduce the threat.

The Ku Klux Klan bombing that killed four Black girls at the 16th Street Baptist Church in Birmingham helped spur passage of the Civil Rights Act of 1964 — historic legislation that outlawed segregation. It did not address the Klan’s violence.

And it had been 67 years after the murder of Emmett Till, a black teen from Chicago who was kidnapped in Mississippi, lynched, and dumped in a river after he was accused of whistling at a white woman, before Congress enacted an anti-lynching law. President Joe Biden signed the bill in late March, more than a year after using his inaugural speech to warn of the rise in white supremacist ideology and domestic terrorism.

“White supremacy is a poison,” Biden reiterated Tuesday during a visit to Buffalo. “We need to say as clearly and forcefully as we can that the ideology of white supremacy has no place in America.”

But now, in the wake of the white supremacist attack in Buffalo, Black civil rights advocates are wondering if they’ll see the same haste from lawmakers on anti-Black hate crimes. The House passed legislation late Wednesday night that would bolster federal resources to prevent domestic terrorism in response to the mass shooting. Supporters of the House bill say it will help officials better track and respond to the growing threat of white extremist terrorism. But the bill still has to receive approval from the Senate.

“We need to know that our top leaders in America react and respond when we are hurt, too, like they acted and responded when others were hurt,” said prominent civil rights attorney Ben Crump, who represents the family of 86-year-old Ruth Whitfield, the eldest victim to die in the Buffalo attack.

Andrea Boyles, an associate professor of sociology and Africana studies at Tulane University, said part of the Black experience in America is seeing racialized violence against Black communities treated as a non-urgent matter.

“The message of it all has consistently been that where there is hate towards Black people, there is least likely to be consequences,” Boyles said. “We should be clear with elected officials, Black and white, Democratic or Republican, that talking points can no longer be the trend.”

It also namechecked Fox News host Tucker Carlson, who has openly discussed on air the baseless “great replacement” conspiracy theory cited by the Buffalo gunman. The conspiracy is a racist ideology, which has moved from white nationalist circles to mainstream, that says white people and their influence are being “replaced” by people of color.

The NACCP also called on advertisers, including the National Football League, to take a moral stand against the cable news outlet by withholding their ad dollars.

On gun violence prevention, the NAACP prescribes the creation of a “domestic terror watch list” and the banning of those on the list from legally purchasing a firearm. And on police reforms, the proposal calls on Biden to take executive action in lieu of the stalled George Floyd Justice in Policing Act before the two-year anniversary of Floyd’s murder next week.

“All police and law enforcement officers must submit to a thorough review of their affiliations to determine they are not aligned with white supremacist organizations,” the NAACP suggests in its proposal.

Patrice Willoughby, the NAACP’s vice president of policy and legislative affairs, said the federal government already has some of the tools it needs to begin acting on the policy proposals.

“Unless there is sort of a holistic approach to stamping out hatred, we are never going to have the type of society in which people are free to live and work without fear,” she said.

Across the civil rights community, Black activists echoed the NAACP’s call for action to address white supremacy and violence.

Amara Enyia, policy, and research coordinator for Movement for Black Lives, said it’s important to acknowledge that the shooting in Buffalo was not an individual act of violence, but instead a symptom and evidence of a systemic problem that has grown significantly in recent years.

“These atrocities that are committed are systems, and they’re systems of a structural and systemic cancer,” Enyia said. “You have this person who is fueled by anti-Black racism and a society whose systems are built on anti-Black racism.

“When we understand that, it can’t come as a surprise that this person would act out in this way, because he reflects a certain worldview that unfortunately undergirded the various systems upon which this society was built. And those of us who are organizers, activists, we’ve been working to try to dismantle these systems because they’ve been harmful.”

Color of Change President Rashad Robinson noted that white supremacists and nationalists have access to wider audiences now and are able to spread hateful and dangerous rhetoric across various online platforms. Robinson has called for stricter regulation of social media platforms to prevent the proliferation of supremacist materials and ideologies.

“What we’re seeing right now, with the dominance of social media platforms, is an unchecked corporate infrastructure whose incentive structures demand a type of engagement that makes going down the rabbit hole of white supremacy way more likely,” Robinson said. “Until we actually have consequences on the 21st century, technological infrastructure, we will be a place where it’s going to be dragging us back to the 18th and 19th century.”