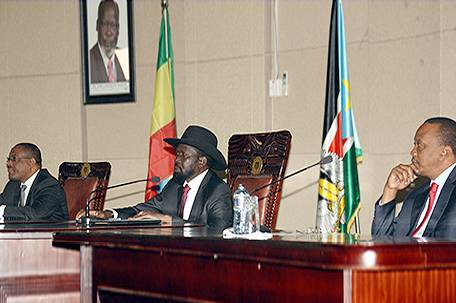 ABOVE PHOTO: Ethiopian Prime Minister Hailemariam Desalegn, left, South Sudanese President Salva Kiir, middle, and Kenyan President Uhuru
Kenyatta, right, in peace talks meeting at State House in Juba, South Sudan, Thursday, Dec. 26, 2013. The leaders of Kenya and Ethiopia arrived in South
Sudan on Thursday to try and mediate between the country’s president and the political rivals he accuses of attempting a coup that the government insists
sparked violence threatening to destroy the world’s newest country.

JUBA, South Sudan — Fighting persisted in parts of South Sudan’s oil-producing region as African leaders on Thursday tried to advance peace talks between
the country’s president and the political rivals he accuses of attempting a coup that the government insists sparked violence threatening to destroy the
world’s newest country.

Kenyan President Uhuru Kenyatta and Ethiopian Prime Minister Hailemariam Desalegn met with South Sudanese President Salva Kiir on Thursday. A senior
government official warned that Riek Machar, the former vice president who now allegedly commands renegade forces in the states of Unity and Upper Nile,
had to renounce rebellion before the government could negotiate with him.

“For us, we are not talking with him,” Leuth said, referring to Machar, whose whereabouts remain unknown. It was not possible to reach Machar, as his known
phone numbers were switched off.

Government troops are trying to retake control of Bentiu, the capital of oil-rich Unity state, from forces loyal to Machar. There was also reported
fighting in Malakal, the capital of Upper Nile state, according to Lueth. Upper Nile and Unity comprise the country’s key oil-producing region, raising
fears unrest there could cut off the country’s economic lifeblood.

Col. Philip Aguer, the military spokesman, said government troops were “preparing to retake Bentiu as soon as possible” and that pro-Machar forces
controlled only “half” of Malakal. He provided no details.

World leaders have urged the country’s leaders to stop the violence in which thousands are feared killed. The United States, Norway and Ethiopia are
leading efforts to open peace talks between Kiir and his political rivals. Kiir said in a Christmas address that he is willing to “dialogue” with all his
opponents.

The United Nations is investigating reports of mass killings since violence began spreading across South Sudan after a fight among the presidential guards
on Dec. 15, pitting soldiers from Kiir’s Dinka ethnic group against those from the Nuer ethnic group of Machar. South Sudan’s top U.N. humanitarian
official, Toby Lanzer, said on Monday that he believes the death toll has surpassed 1,000.

South Sudan gets nearly 99 percent of its government budget from oil revenues.

“We are moving toward them and we will flush them out like we did in Bor,”Leuth said, referring to the capital of Jonglei state that government troops
retook from renegade forces earlier in the week.

Although the capital, Juba, is now calm, fighting appears to be spreading across the country, stretching the limits of humanitarian workers and aid
agencies. The U.N. humanitarian office said aid agencies need $166 million to save lives amid continuing violence.

“The resources will be used to provide clean water and sanitation, health care, shelter, and deliver food and livelihood assistance,” the office said in a
statement. “It will also ensure that the rights of vulnerable people, including survivors of violence, are better protected. The money will be used to
manage sites for displaced people and transport aid workers and supplies to strategic locations where communities are most at risk.”

Some 58,000 people have taken refuge in and around U.N. bases in the country and more than 92,000 have fled their homes as a result of fighting that has
raised fears of a civil war in the country, according to the United Nations.

The U.N. Security Council last week voted unanimously to beef up its peacekeeping force in South Sudan. It condemned targeted violence against civilians
and ethnic communities and called for “an immediate cessation of hostilities and the immediate opening of a dialogue.”

South Sudan peacefully broke away from Sudan in 2011 following a 2005 peace deal. Before that, the south fought decades of war with Sudan. The country, one
of the world’s least developed, still has pockets of rebel resistance and sees cyclical, tribal clashes that result in hundreds of deaths.