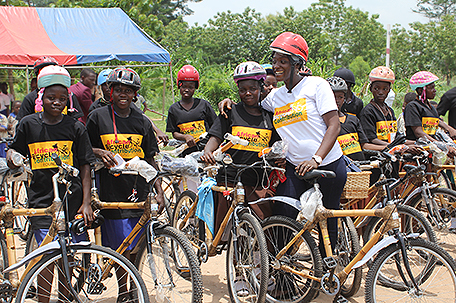 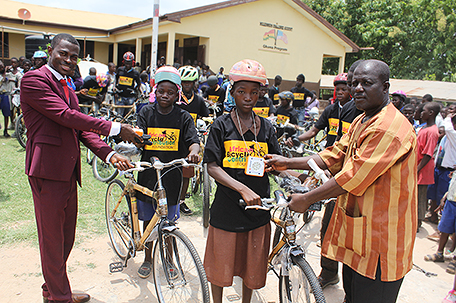 As has been the case in ABCF’s previous bike distributions, the event at the Drobonso SDA Basic School, ABCF’s fourth site, was hosted on behalf of the Foundation, by its Ghana-based partners, Bright Generation Community Foundation (BGCF) and GBBI. ABCF plans to distribute 2,500 free bicycles in primarily rural areas in Ghana over a five-year period.

BGCF Development Consultant Solomon Owusu-Amankwaah spoke to the gathering of nearly 300 bicycle recipients and dignitaries, on behalf of ABCF’s chairman, A. Bruce Crawley, and its executive director, Patricia Marshall Harris. In his remarks to the attendees, including, among others, Sekyere Afram Plains District Director of Education Mrs. Amina Achiaa; Drobonso Community Chief Nana Dankwa Dwubisiaw II; and Head Teacher Richard Awuah, Owusu said: “The ABCF program aligns with Ghana’s national development agenda, in areas of poverty alleviation and access to education, and is expected to contribute, among other things, to improved school attendance for young, rural students, and greater operating efficiency for rural farmers.” 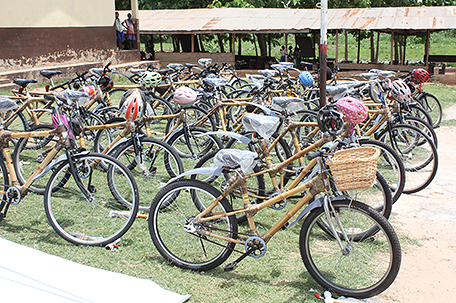 Waiting in place for their new owners, prior to the start of the African Bicycle Contribution Foundation’s (ABCF) recent bike distribution event, at the Drobonso SDA Basic School, in the Ashanti Region, are 35 news EcoRide bamboo Bicycles.

He also mentioned that the U.S.-based foundation plans to build upon its initial bicycle distribution efforts to provide technology-facilitated, inter-continental seminars and classroom discussions between students and entrepreneurs in Ghana and the U.S., and to assist GBBI in expanding its capacity to export its world-class bicycles to the U.S., and to other countries across the globe. To date, the ABCF program has been well received by public officials in Ghana, and previous bicycle recipients have expressed their appreciation for the numerous ways in which having their own bicycles has positively impacted their daily lives.