Action on year-old housing audit could have saved Kenyan lives 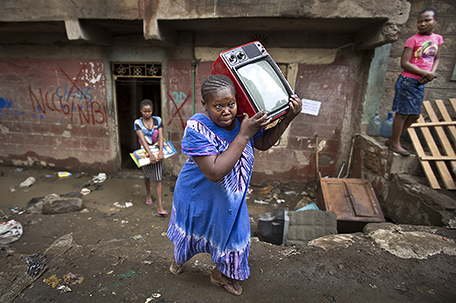 ABOVE PHOTO:  A woman leaves with her television set, as she and others are evicted from their apartment blocks close to the site of last week’s building collapse, after their homes were deemed unfit for habitation and marked for demolition, in the Huruma neighborhood of Nairobi, Kenya Friday, May 6, 2016. As emergency workers retrieved more bodies from a building that collapsed a week ago, bringing the death toll to 41, hundreds of residents were evicted from nearby buildings that are being torn down to prevent other disasters.  (AP Photo/Ben Curtis)

A poorly-constructed Nairobi building collapsed to the ground after days of heavy rain, taking 21 lives with 135 others rescued from the rubble. About 69 residents are still unaccounted for in the April 29 disaster.

The collapsed building – Ngei II Flats – was one of many that would have appeared in an all-city audit of dangerously built housing that was prepared at the request of President Uhuru Kenyatta in 2015 after a series of similar tragedies.

The final report by the National Construction Authority found that 58 percent of buildings in the capital were unfit to live in. The majority of Nairobi’s 4 million people live in low-income areas or slums with no access to basic amenities, according to a survey by the African Population and Health Research Center.

Ngei II had been earmarked for demolition back in 2014, according to the Nairobi News of Kenya.

Nairobi Gov. Evans Kidero, in a visit to the site, said quality assurance officers would have to be fired for failure to ensure the demolition.

“Some county officials responsible for quality assurance will have to be sacked because of this. They will also have to face the law,” Kidero said. He also admitted that corruption and politics were responsible for the existence of substandard buildings in the city.

Taking advantage of a high demand for housing in Nairobi, some property developers bypass building regulations to cut costs and maximize profits.

This was affirmed by a flood of comments on the web page of the Kenyan Star of May 2.  A writer named “Mugabe” wrote:  “My sympathies with the victims. Corruption will kill everyone in this country. Sadly even the rich will not be spared.”

“Wa_MMbando“ piled on: “As usual, the culprits – greedy landlords, crooked civil “engineers” and very corrupt ‘City Hall’ officials – will surrender themselves to the authorities … and others will allegedly be “arrested” as part of the public relations stunts that have become so common in the nation’s capital, yet none of them will ever prosecuted, found guilty and imprisoned for having contributed to the deaths of 20 Huruma residents and injury to countless other victims around the city.”

The owners of the building, Samuel Kamau Karanja  and Henry Mururi Karanja,  said to own three other buildings in the area, were grilled by police who hinted that the two would be charged with manslaughter once the death toll is established.

Obama: ‘Lives have been saved’ by NSA programs