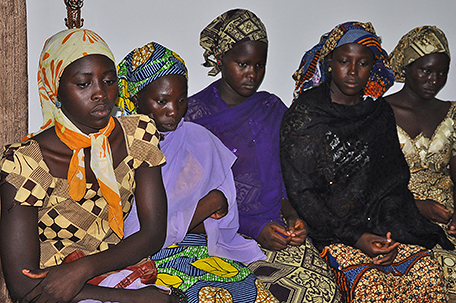 ABOVE PHOTO: Some of the escaped Kidnapped girls of the government secondary school Chibok, attend a meeting with Borno state governor, Kashim Shettima, in  Maiduguri, Nigeria, Monday, June 2, 2014.  Nigerian police say they have banned protests in the capital demanding that the government rescues the more than 200 girls still held captive by Boko Haram militants. Altine Daniel, a spokeswoman for Abuja police confirmed the ban in a text message, saying it was “because of security reasons”. (AP Photo/Jossy Ola)

MAIDUGURI, Nigeria — More than 60 Nigerian girls and women abducted by Islamic extremists two weeks ago have managed to escape, officials said Monday, though more than 200 girls who were kidnapped in April remain missing.

Nigerian security forces and federal government officials had denied reports of the mass abduction from three villages in the northeast state of Borno on June 22.

Chibok local government chairman Pogu Bitrus said Monday he had verified that about 60 women and girls escaped on Thursday and Friday by sending a representative who met with some of the escapees and their families at the hospital in Lassa, a town in the neighboring Damboa local government area.

Vigilante leader Abbas Gava in Maiduguri, capital of Borno state, said Sunday that vigilantes in the area told him 63 women and girls escaped Friday while their captors were engaged in a major attack on a military barracks and police headquarters in Damboa town.

Small-scale kidnappings by Boko Haram extremists had been going on for months when they drew international condemnation for the abductions of more than 200 schoolgirls from a school in Chibok town of Borno state on April 15. Some 219 of those girls still are missing.

The government and military failure to rescue them has attracted criticism at home and abroad.

Boko Haram is demanding the release of detained fighters in exchange for the girls. Nigeria’s President Goodluck Jonathan reportedly has refused to consider a prisoner swap.

Amid the stalemate, Bitrus said that attacks have increased around Chibok and that Boko Haram has taken over some villages in the area and is threatening to take over others. The Kibaku Area Development Association, a local residents’ association of which he is also chairman, reported that 19 villages have been attacked since the April 15 abductions, with more than 229 people killed and about 100 seriously wounded.

In 90 percent of cases there had been advance warning of the attacks — as happened in the Chibok kidnappings — yet the military had taken no action, the association said in a statement Friday.

“Security and defense is mainly provided by the local vigilante (who are ill-equipped) and the police while the soldiers in Chibok sit by and watch villagers being helplessly massacred in their homes, farms and in places of worship,” the association said in a statement.  The association called for help from the United Nations.

“The inability or unwillingness of the federal government to provide adequate security to Chibok (Kibaku) nation following the abduction of the girls leaves us with no option than to call on the United Nations to use its apparatus to come to our aid and protect us from the imminent annihilation as a people,” the statement said.

The Associated Press had originally quoted witnesses and a local official reporting that about 90 people including about 30 boys had been kidnapped from three villages on June 22. Bitrus said those who escaped were interviewed and they said no males were abducted with them. Security forces and federal officials had denied any kidnapping and it is impossible to safely or independently verify reports from an area were Boko Haram is carrying out near-daily attacks and the military often shuts down cell phone service.

Some officials also had questioned the mass abduction of the Chibok girls, which was confirmed last month by a presidential investigating committee.

Nigeria’s military has reported some successes in recent days. Soldiers killed at least 50 insurgents and lost five troops and the commander officer when they repulsed an attack by hundreds of Boko Haram fighters on a military base and divisional police headquarters in Damboa, the Defense Ministry said on Sunday.

It was a rare victory for the military whose bases, including major barracks, have been overrun as soldiers have fled in previous attacks.

On Friday the Defense Ministry reported the arrests of three “suspected female terrorists” whom it accused of luring women, especially widows and young girls, by offering Boko Haram fighters as suitors.

It said the arrests of recruiters for “the female wing of the terrorist’s group” followed a failed suicide bombing by a woman who blew herself up in front of a military camp in northeast Gombe last week.

More than 2,000 people have died so far this year in the 5-year-old Islamic uprising, compared to an estimated 3,600 in the four previous years.