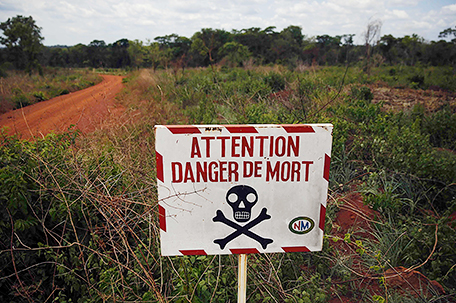 ABOVE PHOTOP: A sign warns travelers of the dangers ahead on the road to Bambari, Central African Republic. According to a Human Rights Watch report released Tuesday, May 2, 2017, armed groups targeting civilians have killed at least 45 people and displaced 11,000 in the past three months. (AP Photo/Jerome Delay, File)

Concerns are mounting that sectarian violence is again spiraling out of control in the country, even in places that previously were spared during the conflict that began in late 2013.

At least 20 people have been killed and several dozen wounded since the unrest in Bria began on Tuesday, said U.N. mission spokesman Herve Verhoosel.

He told The Associated Press that fighting was focused on the Bria airport Friday morning between rebel groups. Meanwhile, U.N. troops intervened to stop youth from looting and burning houses in an area where most humanitarian organizations are based. More than 50 aid workers were now sheltering at the U.N. base, he said.

Verhoosel called the situation “calm but unpredictable,” with peacekeepers deployed in key areas of town.

The U.N. mission “deeply regrets that one more time, civilians pay the highest price,” he said.

Earlier, the U.N. humanitarian agency’s chief of office for the country, Joseph Inganji, told the AP that armed groups came to humanitarian compounds in Bria and pillaged a warehouse. “There’s fighting taking place but we don’t know who’s fighting who,” he said.

Attacks also targeted places of worship and government buildings, the medical charity Doctors Without Borders said in a statement, adding that at least 44 casualties had been treated at the local hospital since Monday. “These are stirring up ethnic and religious divides.”

Bria in November was the site of fierce clashes between two splinter groups of the mostly Muslim rebel movement called Seleka that has battled with Christian militia fighters. Human Rights Watch said at the time that at least 14 people were killed.

Other previously calm parts of the country have seen deadly fighting in recent days.

Since May 8 more than 150 people, including six U.N. peacekeepers, have been killed in attacks in the southeastern town of Bangassou, the southern town of Alinadao and in Bria, according to the U.N., which has warned the death toll may rise.

In the capital, Bangui, tensions were running high. People spoke of the fighting in Bangassou and Bria in hushed tones, turning up the radio whenever the names of the towns came on. Businesses in the Muslim neighborhood of PK5 were closed in protest of the violence in Bangassou, where Muslims reportedly were targeted.

The humanitarian community’s appeal for aid for Central African Republic, one of the world’s poorest countries, is only 16 percent funded.