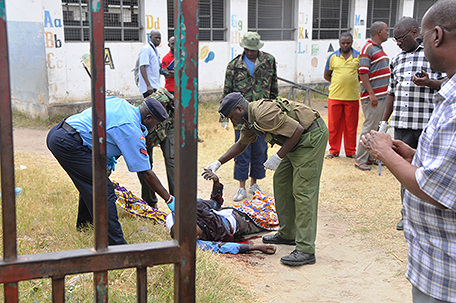 ABOVE PHOTO:  Security officers examine the lifeless body of an assistant pastor George Karidhimba Muriki of the Maximum Revival Ministries Church after he was shot dead by armed gunmen on a motor bike as he was entering into the Church for a Sunday service in Mombasa, Kenya, Sunday Jan. 11, 2015. Henry Ondiek, a senior police official in charge of criminal investigations, said Sunday the pastor was shot at the entrance of the Mvita primary school which hosts the Maximum Revival Centre, a mosque and another church and is guarded by police, with the assailants believed to be part of an extremist group. (AP Photo)

The 2014 death toll is even higher than that of 2013 when extremists killed 67 people in the assault on Nairobi’s Westgate Mall.

Kenyan police said 312 people were killed in the country in militant attacks since 2012 and 779 people were wounded during the period. It is the first time police have categorized Kenya’s extremist attacks in their crime report.

Al- Shabab has vowed retribution for Kenya sending troops to Somalia. Kenya deployed its troops to Somalia in October 2011 to fight the extremist rebels who had carried out cross-border attacks including the kidnapping of four Europeans. Kenyan troops are now part of a multinational African Union force bolstering Somalia’s weak government against an insurgency by al-Shabab which is linked to al-Qaida.

A Kenyan official said Tuesday the government is looking at new options to control the threat including constructing a wall or gullies on parts of the 682 kilometer (423 mile) border with Somalia.

The official who insisted on anonymity because he is not authorized to speak to the press said there are discussions about how to create a buffer zone with Somalia.

“The systemic corruption that afflicts all our institutions infects our security services, too. This continues to be the dead weight our efforts against terrorism have to carry,” Kenyan corruption expert John Githongo wrote by email from Stanford University, California, where he is a visiting scholar.