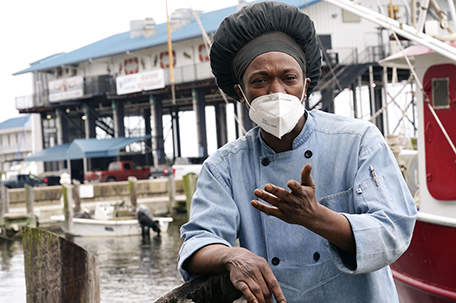 ABOVE PHOTO: Leo Carney, kitchen manager at McElroy’s Harbor House in Biloxi on the Mississippi Gulf Coast, stands along the dock at the city’s small craft harbor on Friday, March 5, 2021, as he speaks about his belief that the removal of coronavirus restrictions will disproportionately impact Black residents — many of whom are essential workers. Carney said he would feel better with restrictions being removed if essential workers had access to the coronavirus vaccine. (AP Photo/Rogelio V. Solis)

JACKSON, Mississippi — Leo Carney worries that bigger crowds and mask-less diners could endanger workers at the Biloxi, Mississippi, seafood restaurant where he manages the kitchen. Maribel Cornejo, who earns $9.85 an hour as a McDonald’s cook in Houston, can’t afford to get sick and frets co-workers will become more lax about wearing masks, even though the fast food company requires them.

As more jurisdictions join Texas, Mississippi and other states in lifting mask mandates and easing restrictions on businesses, many essential workers — including bartenders, restaurant servers and retail workers — are relieved by changes that might help the economy but also concerned they could make them less safe amid a pandemic that health experts warn is far from over.

Many business owners on the Mississippi Gulf Coast were glad Gov. Tate Reeves decided to eliminate mask requirements, limits on seating in restaurants and most other binding restrictions. “But the workers themselves… especially ones that have pre-existing conditions, they’re scared right now,” Carney said.

“This just puts us back in a situation where we’re on the frontlines, under the gun again,” said Carney, who sees Black Mississippians facing the greatest risks from the decision that took effect last Wednesday. COVID-19 has disproportionately affected Black and Latino people in the United States, and many Gulf Coast restaurants have a significant number of Black employees.

Public health experts tracking the trajectory of more contagious virus variants have warned that lifting restrictions too soon could lead to another lethal wave of infections. Although vaccination drives are accelerating as drug manufacturers ramp up production, many essential workers are not yet eligible for COVID-19 vaccines in Mississippi and other states.

“There is nothing magical about the date of April 9. We don’t want the public to think that’s the day we all stop taking precautions,” State Health Officer Scott Harris said.

The governors of Iowa, Montana, North Dakota also have ended mask requirements or plan to suspend them soon. The governor of South Carolina on Friday lifted an executive order requiring face coverings in government office buildings and restaurants, leaving it up to state administrators and restaurant operators to develop their own guidelines.

Governors in several other states, including Michigan and Louisiana, eased the operating limits for bars, restaurants and other businesses in recent days.

The National Retail Federation, the largest retail trade association in the U.S., issued a statement Wednesday encouraging shoppers to wear masks. Some retail chains, including Target and supermarket operator Albertson’s, plan to continue requiring them for both customers and workers in states that no longer make them mandatory.

Texas Retailers Association President and CEO George Kelemen said he thinks many members will continue to require workers — but not necessarily customers — to wear masks and other protective gear.

McDonald’s cook Cornejo, 43, said the end of Texas’ mask mandate next week alarms her because several of her co-workers already were lax about keeping their faces covered. She said co-workers she has asked to pull their masks back over their noses politely acquiesced, but not always for long.

“There are just different attitudes,” said Cornejo, whose 19-year-old son began working as a cashier at the same restaurant to help pay the family’s bills. “Some say it’s just too difficult to keep it on for eight hours, especially when it gets hot.”

The director of the Centers for Disease Control and Prevention, Dr. Rochelle Walensky, encouraged Americans to “do the right thing” by continuing to abide by recommendations for routine mask use and social distancing — even if their states lift restrictions.

While deaths and new confirmed cases have plummeted from their January peaks nationwide, they’re still running at high levels, while outbreak indicators in some states have risen in recent weeks. In Mississippi, for example, the 7-day rolling average of the virus positivity rate rose from 11.47% on Feb. 19 to 12.14% on March 5, and the state’s 7-day rolling average of daily deaths increase during the same period from 15 per day to 20.71 per day.

Workers in cities that still have mask mandates or jobs at businesses that maintain their own virus-prevention rules anticipate defiance from customers emboldened by their governors’ actions and weary of taking precautions.

Molly Brooks, 25, a barista at a Farmers Branch, Texas, coffee shop, said she has regularly dealt with customers who walked out or bullied her and her colleagues when they were asked to wear a mask. Brooks worries how they’re going to enforce the rule, which the coffee shop plans to keep in place, now that Texas’ governor lifted the statewide mask mandate.

“We are gearing up for the emotional toll that this is going to take,” said the 25-year-old barista, who started working for the coffee shop in November while looking for a job in education. “The people who don’t want to wear them are still going to fight…and now they are going to have even more ammunition.”

Square Books in Oxford, Mississippi, home of the University of Mississippi, will require masks and allow only eight customers at a time. Although General Manager Lyn Roberts believes the rules will make many customers feel safe, bookstore employee Paul Fyke said he observed a change in Oxford almost as soon as the Board of Aldermen chose to follow the governor’s lead and did away with the college town’s mask mandate.

“I mean, really, even on the drive home, you can kind of already see there were places where, for a lot of people, it was a triumph,” he said last Thursday, the day after Oxford’s mask requirement ended. “They were happy to be removing them.”

Still, some workers are cautiously hopeful that fewer restrictions will bring more customers, tips and job security after a year short on all three.

In San Francisco, where the mayor last week announced the return of indoor dining and the reopening of movie theaters and gyms, Dino Keres had no qualms about serving drinks to customers bellying up to the bar inside Sam’s Grill.

That’s partly because he was about to get his second vaccine dose, but also because nobody on staff was infected when indoor dining was briefly permitted last fall. What’s more, masks are required unless people are eating, and indoor seating is limited to 25% of capacity.

“We have already went through this once, and now the timing feels about right to try it again,” Keres said Thursday.

Ro Hart, an assistant general manager and hostess at Tony’s Pizza Napoletana in San Francisco, said the return of indoor dining in the city provoked a mixture of joy and anxiety.

“We are happy to be bringing in more revenue, but we are a little nervous, too, because we have to be more stringent about making sure everyone keeps their masks on when they’re not eating,” Hart said, adding that she would be far more worried if San Francisco didn’t require masks.

“We feel for our brothers and sisters at all those restaurants in Texas,” she said.

Stitching safety, one mask at a time