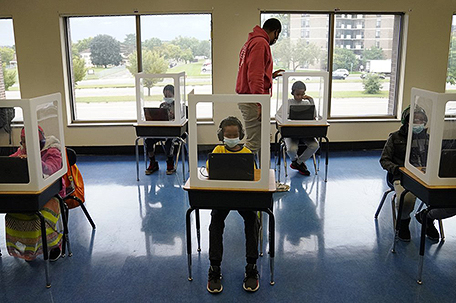 ABOVE PHOTO: FILE – In this Sept. 8, 2020, file photo, paraprofessional Jaevon Walton, center, reminds a student to wear his face mask in a learning pod of second through seventh graders at Harvest Best Academy in Minneapolis. (David Joles/Star Tribune via AP, File)

For years, Erin Whitehead has been a committed fan of the crisis-fueled medical drama “Grey’s Anatomy.”

Today, she turns to the emotionally draining show as a salve, something to take her mind off of … well, off of everything this jumbled year has delivered to her nation, to her society, to her front door.

“Sixteen seasons of ‘Grey’s Anatomy’. That’s what the past six months of 2020 have been,” says Whitehead, a podcaster and full-time mother in Pace, a town of 34,000 in Florida’s panhandle. “We’ve all just been in triage. Nobody can sustain that level of stress.”

On Friday, March 13, 2020, a COVID curtain descended upon the United States, and a new season — a season of pandemic — was born. Now we are half a year into it — accustomed in some ways, resistant in others, grieving at what is gone, wondering with great trepidation what will be.

New conflicts and causes have risen. Anger and death sit in daily life’s front row. A sense of uncertainty reigns. Great chunks of the national emotional infrastructure are buckling. We are locked in a countrywide conversation about control — who has it and who should.

And as the most contentious of presidential elections approaches, the very notion of what it means to be an American — and to be the United States of America itself — is perhaps the biggest contention point of all.

“Six months in, we are in a different place,” says Alicia Hinds Ward, an entrepreneur in Washington, D.C. “We don’t want to stay in this place. It’s ugly, it’s dark and we know we have to change.”

Nearly 200,000 Americans who were with us on March 13 are here no longer. A debate over pandemic policy has aligned itself in exacting fashion with already sharply drawn political lines. A reckoning on race in American life — one set off by a spate of Black Americans dying at the hands of police but with far deeper, more systemic roots — is unfolding vigorously.

School district by school district, neighborhood by neighborhood, sometimes house by house, those who are telling the American story to each other are spinning very different yarns about the country and its purpose.

“We are in a pitched battle between narratives,” says Evan Cornog, a political historian who has written about how presidents and candidates assemble and manage their storylines.

Uncertain times often produce uncertain people. But a strange paradox tends to emerge as well: In uncertain moments, human nature is to seek out certainty. That points to politics, where being absolutely sure is a feature, not a bug. This year, in this republic, that is no exception: In September 2020, the American earth is pocked with the marks of dug-in heels.

There is certainty that Donald Trump is right and has handled the pandemic adeptly, and that a Joe Biden victory in November would end America as we know it. There is equal certainty among others that the reverse is incontrovertibly true.

There is certainty that Black Lives Matter is on history’s and justice’s sides, riding a wave of much-needed change — and certainty, too, that those protesting are part of a violent leftist movement to undermine police, sow disorder and bring down the country.

In the middle of all that intransigence, Frederick Gooding Jr. sees an opportunity to understand. Gooding, an associate professor of African American studies at Texas Christian University, finds an irrefutable link between a coronavirus spring and a summer of protests against racial injustice.

The coming of COVID-19, he says, created an overlay of apprehension in millions of American lives — the fear of harm if you go out, the general unease built into daily life — that Black Americans have long found familiar.

“I think many people were able to experience what people of color were experiencing on a more frequent basis as normal interactions become exacerbated through the additional layers of anxiety and stress,” Gooding says.

This period of uncertainty “provides more connection points to other people,” Gooding says. “Perhaps this current time period can be leveraged as a time when more people can understand and appreciate where we want to push society forward when it comes to sustained racial progress.”

What’s more, for Black people, the weeks of sitting at home watching the virus disproportionately affect Americans of color — and then living through the killings of George Floyd and Breonna Taylor and the shooting of Jacob Blake — proved pivotal.

“In this particular year, when the pot’s simmering, it just blew the lid off the pressure cooker,” Hinds Ward says. “It galvanized folks into action, and the rage ensued.”

It’s difficult to document how these disparate but connected slivers of life — changed racial and cultural dynamics, changed schooling, changed work environments, changed interactions with the daily world — come together to alter an entire society.

But over and over, people unspool versions of the same lament: American life simply feels different. Grief, alienation, loneliness and anger seem everywhere. The country right now, under duress, is all in-the-moment tactics and very little long-term strategy. Virtual life helps us through our days but restores only a sliver of what many crave.

“We’re connected, but there are these barriers. There’s a social piece of us that’s missing, and we’re grieving the loss of that,” says Cynthia M. Vejar, the program director of clinical mental health counseling at Lebanon Valley College in Pennsylvania.

“If I’m angry at a virus, and I’m angry at society, I don’t know where to aim that anger,” she says. “When these emotions are unstructued, we don’t know how to deal with that.”

Whitehead gets that. She labors, she says, “not to be angry and upset with other people” who approach this era’s challenges in ways she deems reckless and standoffish.

“I don’t like that feeling. I don’t want to feel that way about my fellow Americans,” she says. “But it’s really hard not to. Whether you’re Republican, Democrat, support Trump, not support Trump, I think a lot of us are struggling with how we feel about other people.”

Ultimately, as with science itself, it may be adaptability that determines how the American republic evolves as its people navigate this detour.

Have Americans reached the point where they’ve accepted the virus as a permanent interloper, and are acting accordingly? Will impatience doom us? Those answers will become clearer over the next six months under the COVID curtain — unless, and possibly even if, an effective vaccine is found and deployed with dispatch.

Until then, the United States remains a nation built on binary foundations — black/white, either/or, with us/against us — that is finding itself besieged with complex and intricate shades of gray.

Polarity and subtlety are, of course, uneasy partners. Right now, though, that is the hand that Americans have been dealt by the unsympathetic house that is the year 2020.