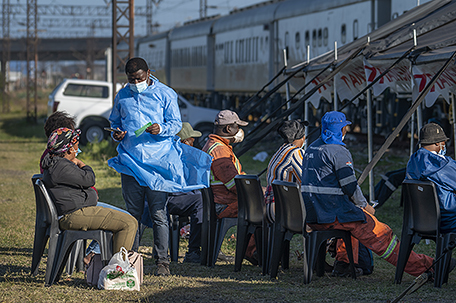 ABOVE PHOTO: Siboniso Nene, head of the vaccination program, briefs people who came for the COVID-19 vaccination at the Swartkops railroad yard outside Gqeberha, South Africa, Wednesday Sept. 22, 2021. South Africa has sent a train carrying COVID-19 vaccines into one of its poorest provinces to get doses to areas where healthcare facilities are stretched. The vaccine train, named Transvaco, will go on a three-month tour through the Eastern Cape province and stop at seven stations for two weeks at a time to vaccinate people. (AP Photo/Jerome Delay)

SWARTKOPS, South Africa — When Wongalwethu Mbanjwa tried to get a COVID-19 vaccination and found his local center closed, a friend told him there was another option: Get one on the train.

Not any train, but South Africa’s vaccine train — which has now made its way to the small town of Swartkops on the country’s south coast. Carrying doctors, nurses and, crucially, vaccine doses, it has a mission to bring vaccines closer to people in small towns and poorer parts of South Africa, which has the continent’s highest number of coronavirus infections at more than 2.8 million.

The train is parked at the Swartkops rail station, the first stop on a three-month journey through the poor Eastern Cape province. It will stay for about two weeks at a time at seven stations in the province to vaccinate as many people as possible. State-owned rail company Transnet launched the program to aid the government’s rollout. The initiative aims to meet head-on two of the government’s biggest challenges: getting doses out beyond big cities to areas where health care facilities are limited and trying to convince hesitant people in those areas to get vaccine shots.

The train, named Transvaco, can hold up to 108,000 vaccine doses in ultra-cold refrigerators. It has nine coaches, including accommodation coaches and a kitchen and dining area for the staff, a vaccination area and consulting rooms.

It’s a new take on another train that’s been taking doctors and medicine across South Africa since the mid-1990s.

Dr. Paballo Mokwana, the train program’s manager, said medical personnel had vaccinated just under 1,000 people so far during the stop in Swartkops. They’ve given jabs on the train but have also sent a vaccination team into nearby factories and businesses to administer shots to people at work.

Untsaphokazi Singaphi was one of the people who received a vaccine shot from the off-site vaccination team at the factory where she works. She arrived to get her second dose of the Pfizer-BioNTech vaccine with a smile on her face.

“I am happy, and I feel at peace,” she said. “I know that I am safe, and so are my children and others around me. So I am really at peace with (the fact) that I’m done.”

“I have been waiting for the moment where I too can say that I am among the vaccinated in South Africa,” Singaphi said. Just 14% of South Africa’s population of 60 million is fully vaccinated, and the train is one part of the push to get that number up as quickly as possible.

It doesn’t always work, though.

Andiswa Maseko was the first person to arrive at the train for a vaccine early Thursday morning. The head of vaccination, Bongani Nxumalo, explained the options to her. She could either have the one-shot Johnson & Johnson vaccine or go with the two-dose Pfizer-BioNTech. After Maseko showed signs of hesitating, a nurse entered the vaccination cubicle and also tried to reassure her.

But Maseko asked to be given a moment to think about whether she wanted to get a vaccine, stepped off the train and never returned. Nxumalo said Swartskop and the Eastern Cape province were different from other places they’ve worked in. People are more reluctant.

“Most of the people here…have misconceptions about the vaccine,” he said. ”Many people will say ‘You guys are here to kill us.'” “So, we keep on telling them that the vaccine is real, COVID is there, and many people have lost their lives. We tell them that we have also been vaccinated,” Nxumalo said.