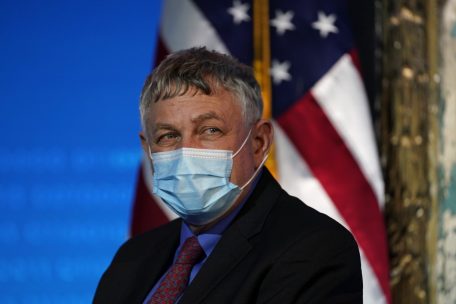 Above Photo: Eric Lander, nominee for the director of the Office of Science and Technology Policy and adviser on science, listens as President-elect Joe Biden speaks during an event at The Queen theater, Saturday, Jan. 16, 2021, in Wilmington, Del. (AP Photo/Matt Slocum)

The new White House science adviser wants to have a vaccine ready to fight the next pandemic in just about 100 days after recognizing a potential viral outbreak.

In his first interview after being sworn in Wednesday, Eric Lander painted a rosy near future where a renewed American emphasis on science not only better prepares the world for the next pandemic with plug-and-play vaccines, but also changes how medicine fights disease and treats patients, curbs climate change and further explores space. He even threw in a Star Trek reference.

“This is a moment in so many ways, not just health, that we can rethink fundamental assumptions about what’s possible and that’s true of climate and energy and many areas,” Lander told The Associated Press.

Lander took his oath of office on a 500-year-old fragment of the Mishnah, an ancient Jewish text documenting oral traditions and laws. He is the first director of the Office of Science and Technology Policy to be promoted to Cabinet level.

Lander said President Joe Biden’s elevation of the science post is a symbolic show “that science should have a seat at the table” but also allows him to have higher-level talks with different agency chiefs about research issues.

Lander is a mathematician and geneticist by training who was part of the human genome mapping project and directed the Broad Institute at MIT and Harvard. He said he is particularly focused not so much on this pandemic, but the lessons learned from this one to prepare for the next one.

“It was amazing at one level that we were able to produce highly effective vaccines in less than a year, but from another point of view you’d say, ‘Boy, a year’s a long time,’” even though in the past it would take three years or four years, Lander said. “To really make a difference we want to get this done in 100 days. And so a lot of us have been talking about a 100-day target from the recognition from a virus with pandemic potential.”

“It would mean that we would have had a vaccine in early April if that had happened this time, early April of 2020,” Lander said. “It makes you gulp for a second, but it’s totally feasible to do that.”