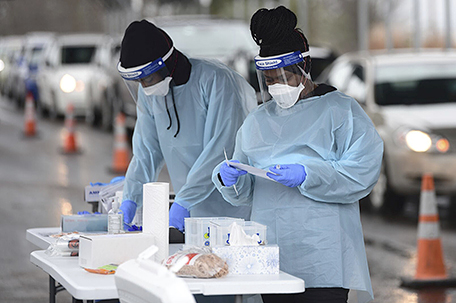 ABOVE PHOTO: Quamea Richards, left, and Tawanna Thomas of AMI Health, prepare for a long line of patients at a drive-up COVID-19 testing facility at the Georgian Place in Somerset, Pa., Monday, Jan. 4, 2021. (John Rucosky/Tribune-Democrat via AP)

Last Friday, Pennsylvania released an updated coronavirus vaccine plan that makes more people eligible for shots in the initial phases of the rollout.

Health care workers and nursing home residents remain at the front of the line, followed by people 75 years and older and “essential workers” like police officers, grocery store clerks and teachers. With COVID-19 continuing to rage throughout Pennsylvania, health officials cautioned the state is still months away from having enough doses of the two approved vaccines to inoculate the general public.

“I know it is difficult to ask, but we must have patience,” Dr. Rachel Levine, the state health secretary, said last Friday. “It will take several months before this vaccine is available for everyone.”

To date, the federal government has allocated to Pennsylvania more than 827,000 doses of the Pfizer and Moderna vaccines. More than 235,000 shots have been given, though Levine said the actual number is certain to be higher because reporting by hospitals and pharmacies lags by one to three days. Doctors, nurses and other health workers, and residents and staff at nursing homes and long-term care facilities — a group that numbers about 1 million — are rolling up their sleeves first. State officials have not offered a timeline for when that initial phase of the vaccination campaign, which began last month, will be completed.

Next up under the state’s revised vaccine plan are people 75 and older and frontline essential workers, a huge and diverse group that includes clergy; first responders; prison guards; school staff; and food, manufacturing, postal, public transportation and grocery store workers.

After that, eligibility will extend to people from ages 65 to 74, those with serious health conditions, and another huge batch of workers in industries ranging from banking to energy. Rep. Aaron Kaufer (R-Luzerne) said high-risk Pennsylvanians should be moved up on the state’s priority list.

“I am absolutely appalled that the governor and Dr. Levine have shown such little care and low prioritization towards residents who have high-risk medical conditions when developing their COVID-19 vaccine plan,” Kaufer said in a news release. Levine said the state’s vaccine plan tracks with recommendations from the U.S. Centers for Disease Control and Prevention. At a media briefing Friday, she predicted it might be late spring or summer before the state will be ready to offer the vaccine to anyone who wants one.

“This is going to take time, but a future without COVID-19 is coming,” said her boss, Gov. Tom Wolf.

The state reported more than 10,000 new, confirmed cases of the virus on Friday — the most in several weeks — likely indicating the beginning of a post-holiday surge, according to Levine. The state has been averaging about 7,500 new cases per day. Geisinger, one of the state’s largest health systems, said it continues to see high rates of infections and hospitalizations. The numbers are “consistent with what you would expect during full-blown community spread,” Dr. Jaewon Ryu, Geisinger’s CEO, said in a separate briefing Friday.

Geisinger said it has been giving more than 1,000 vaccine shots a day, inoculating about half of its workers, and expects to have administered initial doses to about 19,000 people by the end of next week.