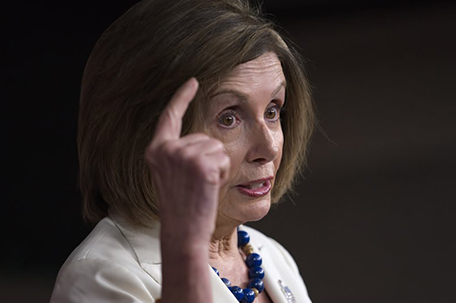 WASHINGTON (AP) — House Speaker Nancy Pelosi said Thursday up to $1 trillion is needed to shore up state and local governments for coronavirus costs, a stunning benchmark for the next aid package that’s certain to run into opposition from Senate Republicans.

Pelosi said the “heroes” fund would help prevent layoffs as governors and mayors stare down red ink in their budgets. Many jurisdictions are facing rising costs from the health pandemic and plummeting revenues in the economic shut down. The best way Americans can support local nurses, bus drivers and other front-line community workers, Pelosi said, is to make sure they don’t lose their jobs to budget cuts.

“This is something of the highest priority, it honors our heroes,” Pelosi said.

Nurses, transit bus drivers and other workers “are risking their lives to save lives and now their going to lose their jobs,” she said.

The $1 trillion marker comes after Senate Majority Leader Mitch McConnell shifted his tone suggesting he is “open” to considering additional funds in the next coronavirus relief bill.

But the eye-popping figure comes on top of nearly $3 trillion Congress has already approved over the past month to salvage the economy and confront the health crisis.

Congress is partially reopening next week as House committees hold several hearings, and the full Senate gavels into session after being shuttered for more than a month during the pandemic.

McConnell said Thursday on Fox he’s willing to consider money for the states, but isn’t about to send federal dollars to bail out overspending.

“We’re not interested in borrowing money from future generations to send down to states to help them with bad decisions they made in the past unrelated to the coronavirus epidemic,” the GOP leader said.

McConnell insists any fresh funding must be tied to liability reforms to prevent what he calls “an epidemic of lawsuits” against doctors, hospitals and businesses reopening in the pandemic.

In outlining the next package, Pelosi said the new funding for state, county and city governments would be spread out over several years.

The California Democrat acknowledged Congress may not be able to provide the full amount being sought. Governors have asked for $500 billion, and county and city governments are requesting a similar amount, she said.

“We’re not going to be able to cover all of it,” Pelosi said.

But to the extent the federal government can provide funds to prevent widespread layoffs, she said, “that’s our goal.”

Congressional leaders staked out priorities for the next, fifth round of aid, even as key senators joined their House colleagues in sounding alarms over the health risks of reopening the U.S. Capitol.

Sen. Dianne Feinstein, D-Calif., urged McConnell to reconsider, saying there is “no way” to bring 100 senators plus staff to the Capitol complex without “increased risk.”

Feinstein said, “This is the wrong example for the country.”

The Washington, D.C., region remains a virus hot spot, health officials say. Feinstein noted a number of Capitol staff and police officers testing positive for the virus. Stay-home orders are in place through mid-May for the District of Columbia.

The House canceled its scheduled return after lawmakers revolted and the Capitol physician warned of the health risks for the 430 lawmakers and their staff.

McConnell’s office would not say if he consulted with the Capitol physician on the decision to resume Senate operations. He declined to answer when asked about it Thursday.

“I think we can conduct our business safely,” he said on Fox.

The Republican leader faced a storm of criticism from the nation’s governors after panning Democrats’ proposal for more than $500 billion to help cash-strapped local governments cover the sudden extra costs of police, fire and other front-line workers in the crisis. Last week, he suggested states should be allowed to go bankrupt.

House and Senate leaders are straining to respond to the pandemic crisis as they face the reality that Congress may not be able to fully resume for some time.

Senators are returning Monday to an agenda of confirming Trump’s nominees for judicial and executive branch positions.

Among them is Rep. John Ratcliffe, R-Texas, Trump’s choice to be the new director of the Office of National Intelligence. The Senate Intelligence Committee is preparing to consider the nomination, according to a person unauthorized to discuss the situation and granted anonymity.

Senate Democratic leader Chuck Schumer said the Senate instead should focus on congressional oversight of the federal coronavirus response.

Democrats proposed a new effort to federalize the nation’s medical supply chain. Schumer said resources will be needed as the country ramps up testing and contract tracing in the months ahead.

In the House, a bipartisan House task force is also considering a proposal for proxy voting, which would be a first in the House’s 200-plus-year history.

Senate Republicans are planning to hold their regular Tuesday lunch, in what will perhaps be one of the largest gatherings in the area.