Oct 26 is final day to request a mail-in ballot to vote in Pennsylvania, see list of drop boxes throughout Philadelphia 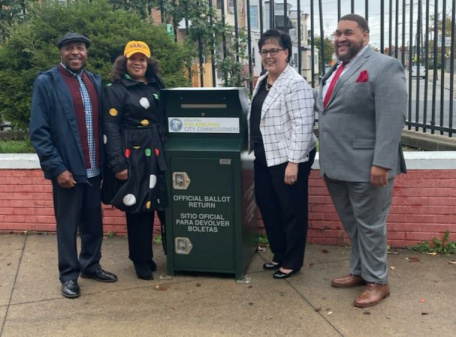 City Commissioner Omar Sabir hosted a nonpartisan GOTV drive and rally to bring attention to the final day to request a mail-in ballot in Pennsylvania. This event was held at the newly installed Ballot Drop Box outside of Shepard Recreation Center at 5700 Haverford Ave. Commissioner Sabir will be supported and joined by:

Commissioner Sabir reminds voters that it’s not too late to apply to vote by mail in the following ways:

Voters who want to track the status of their application or ballot can visit pavoterservices.pa.gov and click “Election Ballot Status.”

The Board of Elections must receive completed ballots no later than 8PM on Election Day, November 2, 2021. Postmarks do not count.

Voters who do not wish to put their completed ballot in the mail can deliver it to one of 16 drop boxes throughout the city. The dropboxes are secure, monitored, and open 24/7. Their locations are as follows: