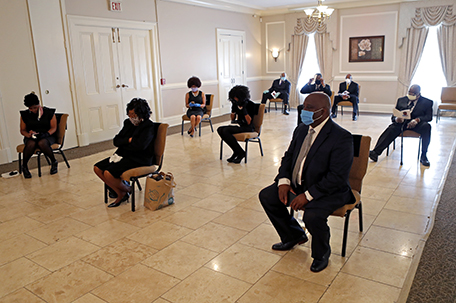 ABOVE PHOTO: Friends and family of Larry Hammond who were among only 10 mourners allowed, sit in chairs spaced for social distancing, during his funeral at Boyd Funeral Home in New Orleans on April 22, 2020. (AP Photo/Gerald Herbert, File)

The conversations went like this: It will be just a few days. It can be kept at bay. There will be some inconvenience, sure, but the world will merely be paused — just a short break, out of an abundance of caution, and certainly not any kind of major grinding to a halt. Certainly not for two years.

Certainly not for hundreds of thousands of Americans who were among us at that moment in mid-March 2020 — who lived through the beginning, watched it, worried about it (or didn’t), and who, plain and simple, aren’t here anymore.

Flattening the curve — such a novel term then, such a frozen moment of a phrase today — seemed genuinely possible two years ago this weekend, when Major League Baseball’s spring training games trickled to an end with their season suddenly postponed, when universities told students to stay away, when Congress — astonishingly — began to talk about whether it would be able to work from home.

“We would recommend that there not be large crowds,” the nation’s top infectious disease researcher told Congress two years ago Friday, presaging two years of arguments over that exact statement.

His name was Anthony Fauci, and he would become one of Pandemic America’s most polarizing figures, caught between provable science and charges of alarmism and incompetence and malevolence, even occasionally from the former president himself.

And for a while, there weren’t large crowds. Except when there were.

For weeks in those early days, Americans in many corners of the republic all but shut down. Faces disappeared as masks went up against the invisible adversary — if you could actually obtain them. Hand sanitizer was squirted so liberally that some distilleries pivoted from whiskey to alcohol antiseptics. People discussed ventilator shortages over family meals. Zoom became, for the nation, a household word; suddenly your colleagues were arrayed on a screen in front of you like personalized, workaday “Brady Bunch” opening credits.

All these things were new once.

In the weeks that followed, as the scope of things revealed itself gradually, there were questions we knew to ask, and questions we didn’t.

The ones we knew to ask: How does it spread, and how easily? Can we keep it out? Can I even go outside safely? Should I wash my groceries? Will there be a vaccine, and if so, how quickly?

The ones we didn’t: How to combat the extreme mountains of mis- and disinformation surrounding the virus and the vaccines that emerged from the scientific community astonishingly quickly? How to manage the anger, and the national division, that poured from the political arena into the protracted virus discussion and burned in conversational trash fires across the land? How to navigate the emotional rubble of an entire generation of kids whose lives and educations would be upended?

Those questions are the ones that, right now, don’t seem outdated. They seem fresh and immediate, and they remain largely unanswered today — a time when it can be difficult to summon memories of the beginning of this thing because of all that’s happened since, and all that’s still happening.

The American memory is a strange beast. The nation, which is younger than most societies on the planet, loves to trumpet its storyline of action but has long had trouble reckoning with or even acknowledging its history — whether it be racial or military, gender or economic. Pandemic history, even in the two years since those days in March 2020, is hardly an exception.

Do you remember those moments when people were talking about working together, when daily life was thrown off its axis enough that Americans were, for a time, a bit gentler with each other? When the word “COVID” was barely used yet, and everyone was just talking about the coronavirus?

“If we avoid each other and listen to the scientists, maybe in a few weeks it will be better,” Koloud “Kay” Tarapolsi of Redmond, Washington, told The Associated Press on March 11, 2020. Exactly two years later, this week, she said of those early days: “I just wish we would have taken it more seriously.”

And now: More than 6 million souls lost across the world. In the United States, nearly a million dead — and the polarization that was already poking at the fabric of American society redeployed into pandemic anger, setting masked neighbor against unmasked one, creating a fertile petri dish to grow as-yet undiscovered brands of mistrust and misconception.

The thing about history is this: Sometimes we talk about “now” as if it were the culmination of all that came before — the actual destination of everything. What we often fail to consider is that “now” is just another junction along the track, another waystation en route to the next thing and the next and the next.

That goes for the “now” of March 2020, yes. But it also applies to the “now” of March 2022 as well. Looking back on the uniquely strange and bedeviling year of 2020 is useful — you try to learn from what came before — but it also affords the chance to think about something else: Two years later, how will we look at right now? How will we take the measure of what we are doing two years after it all began? Is this thing anywhere near done? And what happens when it is?

“Who are we after this? Who are we after dealing with this situation that we’ve never dealt with before?” Hilary Fussell Sisco, a professor at Quinnipiac University who studies how people communicate in troubled moments, said precisely two years ago Saturday. “You find out who you are when a crisis hits.”