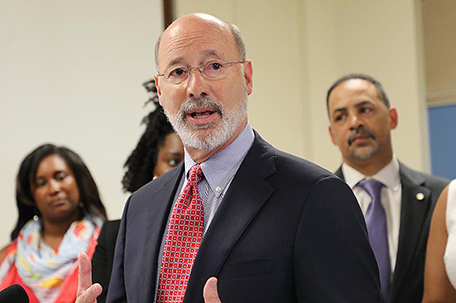 HARRISBURG, Pa. (AP) — Gov. Tom Wolf extended a shutdown order to the entire state of Pennsylvania in an effort to halt the spread of the coronavirus, he said Monday.

On Monday, he extended that order to the rest of the state.

“This isn’t a decision that I take lightly at all,” Wolf said. “It’s one I’m making because medical experts believe it’s the only way we can prevent our hospitals from being overwhelmed.”

In Philadelphia, Mayor Jim Kenney ordered a halt to all nonessential business activity and city government operations for two weeks in the city of 1.6 million people.

In issuing the order, Kenney asked that residents and businesses observe the restrictions, and said he understood that it could have devastating effects on them.

“We are aware that this will disrupt life in Philadelphia and we do not make these changes lightly,” Kenney said in an address from City Hall.

Restaurants and bars in Philadelphia cannot have dine-in service, but can still offer takeout and delivery options.

The order reflects a move Gov. Tom Wolf has made in Philadelphia’s four heavily populated suburban counties, where most cases of COVID-19 have been found.

Meanwhile, courts around the state are increasingly closing down and

Pennsylvania’s number of cases continued growing Monday, exceeding 75, according to the state Department of Health.

A look at the other developments in Pennsylvania:

Cases confirmed by the Pennsylvania Department of Health have exceeded 75, as of Monday. The majority of confirmed cases have been in southeastern Pennsylvania.

Health officials have said most of the people affected were in isolation at home, with a handful being treated at hospitals.

For most people, the new coronavirus causes only mild or moderate symptoms, such as fever and cough. For some, especially older adults and people with existing health problems, it can cause more severe illness, including pneumonia, and death.

The vast majority of people recover.

The number of medical professionals getting infected with the fast-spreading COVID-19 in Pennsylvania is growing.

St. Christopher’s Hospital for Children in Philadelphia closed its trauma department and closed its intensive care unit to new admissions after a physician was diagnosed with the illness.

The physician, who worked in the intensive care unit last Monday through Wednesday, did not acquire the infection in the hospital, the hospital’s acting CEO, Ron Dreskin, said in letter posted on the hospital’s website.

The case at St. Christopher’s follows reports in recent days that a Lehigh Valley Health Network staffer and a Children’s Hospital of Philadelphia cardiologist had met with patients before testing positive.

The virus that has stricken tens of thousands around the globe causes only mild symptoms for the majority of the people who become infected but can be deadly for some, especially older adults and people with certain health conditions such as respiratory illness.

Wolf, in a new front to slow the spread of the new coronavirus in Pennsylvania, ordered all restaurants and bars to close their dine-in facilities starting Monday in five heavily populated counties, including Allegheny County, home to Pittsburgh, and the four counties ringing Philadelphia.

The order, issued late Sunday, followed Pittsburgh’s announcement of a ban on public gatherings of 50 people or more, tightening an earlier restriction Sunday to bring it in line with new guidelines from federal health officials.

Wolf on Friday ordered the closure of all schools statewide and a no-visitor policy at all state prisons and licensed nursing homes statewide.

He also ordered staff in the Capitol complex in Harrisburg to work from home, if they are able.

The Pennsylvania Turnpike Commission said that cash and credit cards will not be accepted at any interchange statewide beginning Monday at 8 p.m. The measure is designed to keep travelers safe, so that they don’t need to stop at tollbooths or interact with tolling personnel during the COVID-19 pandemic, the commission said.

All tolls will be assessed electronically via E-ZPass or the PA Turnpike TOLL BY PLATE program as vehicles travel at posted speed limits through tolling points. Travelers are being asked to still slow down and pay attention when going through interchanges.

The Pennsylvania Supreme Court is giving the chief judges in each county authority to close down court facilities and suspend time limits that normally apply to court proceedings. The high court acted Monday and provided the emergency powers through April 14. The order, however, doesn’t affect criminal defendants’ right to speedy trials.

Members of the Pennsylvania House are coming to Harrisburg for a Monday afternoon voting session, but Democratic leaders say it is unneeded and puts health at risk.

Minority Leader Frank Dermody, D-Allegheny, said in a email to fellow lawmakers Sunday night that Republican leaders insist on swearing in a newly elected member and voting for COVID-19 legislation that the Wolf administration has said it does not need.

Among the possible topics for debate are House rules changes to allow the chamber to conduct business remotely. Dermody said Democrats “have significant concerns” with the Republican-drafted proposals.

House Speaker Mike Turzai, R-Allegheny, told members that Wolf has requested legislation to be moved, although Wolf said Friday there was nothing his agencies needed.

Tuesday and Wednesday voting sessions were possible in the state Senate to address funding, schools and employment issues related to the virus, a Senate GOP spokeswoman said.

Meanwhile, three elections to fill vacancies in the House were expected to go forward as scheduled Tuesday.

House Republican leaders on Sunday said they based their decision not to postpone the elections in part on the fact that absentee balloting is already underway.

All three seats are open because the previous occupants, all Republicans, were elected to other positions last fall. The seats are based in Mercer County, Bucks County and Westmoreland County.