For Biden, how to help mangled economy is next obstacle 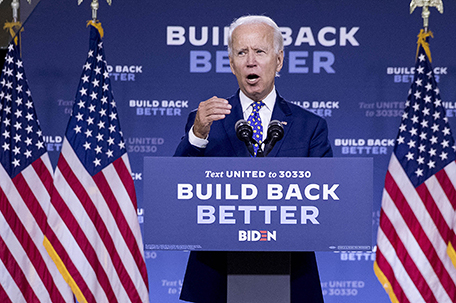 BALTIMORE (AP) — Joe Biden will inherit a mangled U.S. economy — one that never fully healed from the coronavirus and could suffer again as new infections are climbing.

Parents cannot return to work as childcare centers have shuttered. Restaurants and local retailers are draining whatever cash reserves are left–with many owners wondering if the next week might be their last. One in six restaurants was already closed in September, according to an industry survey.ADVERTISEMENT

Biden will also be facing an American public with decidedly different views about their own financial well-being, with higher income families weathering the pandemic reasonably well and those earning far less in increasing economic peril.

It will in some ways be a reprise of when Biden became vice president at the depths of the financial crisis in 2008-09, with possibly fewer tools and less political leverage to press an agenda to both corral the virus and stoke economic growth.

He is expected to somehow inject enough aid to sustain workers, businesses and state and local governments, without necessarily having enough congressional partners who share his concerns. All of this could be the difference between a successful presidency and a floundering one.

It’s unclear whether his victory was enough to tip the Senate to the Democrats — with two Senate seat runoffs in Georgia — and provide a clearer pathway for the money. This means that any efforts to secure another round of aid may depend on Republicans who were already voicing concerns about a rising budget deficit before the election.

Senate Majority Leader McConnell of Kentucky previously said a measure should be passed before year-end, but it’s unknown in the aftermath of the election what a compromise would look like or whether President Donald Trump would back it. The longer that aid gets delayed, the greater the threat for the economy.

“The risk is that the recovery goes into reverse,” said Gregory Daco, an economist for the consultancy Oxford Economics.

AP VoteCast, a survey of more than 110,000 voters, found that the recession’s harm has mostly struck lower-income households, though most people were shielded in large part by initial rounds of aid that nearly totaled $3 trillion.

Twenty-nine percent of voters in households earning less than $50,000 annually said they’re falling behind financially. Their misfortune is a sharp contrast to what’s happening for those with incomes above $100,000. Not only are higher-earners less likely to be struggling, but 26% said their finances are improving.ADVERTISEMENT

Among Biden voters, 89% said it was more important to contain the pandemic than limit any ongoing damage to the economy. This is likely because they see no trade-off: the economy will never safely recover so long as the threat of the coronavirus exists.

“To get the economy under control, you need to get the virus under control,” said Amanda Fischer, policy director at the Washington Center for Equitable Growth, a liberal think tank. “It’s the K-shaped recovery—we see a divide between the wealthiest and everyone else.”

The economy was objectively hurting as ballots were cast, even if it has improved since April. The unemployment rate was 6.9%, compared to 4.7% when Trump took office. Retail sales slipped 0.8% since the start of 2020, with a collapse at restaurants, clothiers and furniture stores.

“The labor market still has a long way to go to recover to where it was before the pandemic,” said Jed Kolko, chief economist at the job posting firm Indeed. “Employment is down in almost all industries, dramatically down in industries that depend on travel and large gatherings.”

The nation’s top public health officials are warning that the virus is likely escalating — record numbers of cases have been reported this week — and are beseeching Americans to wear masks, maintain social distance, and avoid large groups, especially indoors. The worsening disease could force more businesses to close.

Still, 43% of voters believed the economy was excellent or good. This includes about three-quarters of voters backing Trump, who campaigned on the idea that the economy was booming and would continue to do if he remained president. With Biden in the White House, these once-optimistic voters may suddenly switch and say the economy is troubled.

“That’s what we saw in 2016 — a reversal by party in economic confidence,” Kolko said. “It was dramatic and very quick after the election. I wouldn’t be surprised if we saw the same.”

Alec Phillips, an economist at Goldman Sachs, wrote in a note Wednesday that control of the Senate will determine how much additional aid gets approved. He anticipates Republican control means a stimulus package under $1 trillion, but a Senate Democratic majority with Biden in the White House would push that up to $2.5 trillion to $3 trillion.

“We’ll have a stronger recovery if we can just get at least some more fiscal support,” Powell said.

There is also a philosophical divide: Most Biden voters believe the government should do more to solve the nation’s problems, while most Trump voters say the government is already doing too much.

Brian Riedl, a senior fellow at the conservative Manhattan Institute for Policy Research, estimates that the Democrats and Republicans have about $500 billion worth of shared priorities for additional aid. That might leave House Speaker Nancy Pelosi with little choice but to accept that sum, if Republicans preserve their Senate majority.

“Republicans have little reason to budge,” he said. “So the question is whether Democrats will accept a $500 billion package and come back later for more, or continue the stalemate.”

Part of the challenge is not just the size of any aid package, but whether it helps state and local governments that are starving for tax revenue and whether it can be passed quickly enough to help the families most in need. Trump has already colored that debate by saying that Democrats want to bailout poorly managed states, a talking point echoed by some Republicans.

The problem for Biden is that the group he lifted up during the election — the poor and the working class — are the ones who will bear the most pain from any gridlock.

“The U.S. economy is operating at around 80% of total capacity to produce and consume,” said Joe Brusuelas, chief economist at RSM, a tax advisory and consultant.

“The U.S. can afford to wait on additional fiscal aid,” he said, but “the poor and working class are going to pay a terrible price.”