EXPLAINER: BA.2 variant takes over. What’s known about it? 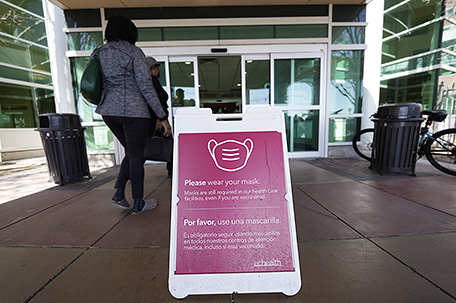 ABOVE PHOTO: A sign advising visitors to don face coverings stands outside the main entrance to UCHealth University of Colorado hospital Friday, April 1, 2022, in Aurora, Colo. An extra-contagious version of the omicron coronavirus variant has taken over the world. The variant scientists call BA.2 is now dominant in at least 68 countries, including the U.S. The World Health Organization says it makes up about 94% of sequenced omicron cases submitted in the most recent week to an international database. (AP Photo/David Zalubowski, File)

In the latest battle of the coronavirus mutants, an extra-contagious version of omicron has taken over the world.

The coronavirus version known as BA.2 is now dominant in at least 68 countries, including the United States.

The World Health Organization says it makes up about 94% of sequenced omicron cases submitted to an international coronavirus database in the most recent week. And the Centers for Disease Control and Prevention says it was responsible for 72% of new U.S. infections last week.

At the end of last week, the variant was responsible for more than three-quarters of cases in Houston Methodist hospitals. Less than two weeks earlier, 1% to 3% of cases were caused by BA.2.

“It’s not terribly surprising because it is more contagious” than the original omicron, Long said.

As the variant advances, scientists are learning more about it. But they still don’t know exactly how it will affect the trajectory of the pandemic.

BA.2 has lots of mutations. It’s been dubbed “stealth omicron” because it lacks a genetic quirk of the original omicron that allowed health officials to rapidly differentiate it from the delta variant using a certain PCR test.

One reason BA.2 has gained ground, scientists say, is that it’s about 30% more contagious than the original omicron. In rare cases, research shows it can sicken people even if they’ve already had an omicron infection — although it doesn’t seem to cause more severe disease.

Vaccines appear equally effective against both types of omicron. For both, vaccination plus a booster offers strong protection against severe illness and death.

HAS THE VARIANT PUSHED UP CASES?

Coronavirus cases rose in parts of Europe and Asia when BA.2 became dominant, and some scientists are concerned that the variant could also push up cases across the U.S.

Besides being more contagious, it’s spreading at a time when governments are relaxing restrictions designed to control COVID-19. Also, people are taking off their masks and getting back to activities such as traveling, eating indoors at restaurants, and attending crowded events.

At this point, overall coronavirus cases in the U.S. are still on the decline. But there have been upticks in some places, including New York, Arizona, and Illinois.

Health officials have also noted that case counts are getting more unreliable because of the wide availability of home tests and the fact some people are no longer getting tested.

“We’re entering a phase where increasing cases or waves may be very regional and it may depend a lot on vaccination levels in the community — and not just vaccination levels but timing of the vaccinations,” Long said. “How long ago were they? Did people get boosters? Because we know the immunity to the vaccine wanes a little bit over time.”

Long said he feels “very certain” that cases will eventually go back up in the U.S., whether that’s because of BA.2 or some future variant. “If it’s BA.2,” he said, “it may be more of a wave or a speed bump than a surge.”

For now, COVID-19 hospitalizations and deaths are still trending down nationally.

ARE THERE ANY OTHER VARIANTS TO BE CONCERNED ABOUT?

As the coronavirus continues to evolve, the WHO is tracking other mutants, including hybrids known as “recombinants.”

These include combinations of delta and omicron and hybrids of BA.2 and the original omicron, also known as BA.1.

One recombinant that health authorities are tracking closely is a BA.1-BA.2 hybrid called XE, which was first detected in the United Kingdom in January. About 600 cases have been reported, and scientists believe it may be about 10% more contagious than BA.2.

WHAT SHOULD PEOPLE DO?

The advice from experts remains the same: Take precautions to avoid getting COVID-19.

“The virus is still out there circulating,” Long said. “Vaccination is still your best defense.”

Get the shots if you haven’t already, he said, and get the second booster if you’re eligible because you are 50 or older or have a compromised immune system.

“If cases start going up in your community, think about assessing your risk level,” Long said. “If you stopped masking and stopped worrying about distancing and things … that’s the time to reinstitute those protective measures.”

EXPLAINER: What we know and don’t know on new COVID variant

Israel to ban travel to US, Canada over omicron variant