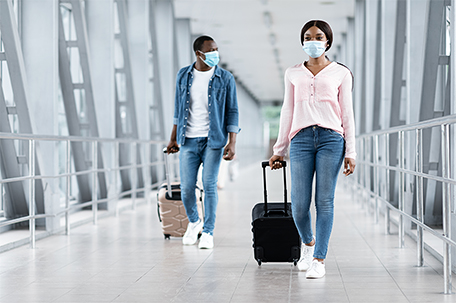 BRUSSELS (AP) — The European Union recommended Monday that its 27 nations reinstate restrictions on tourists from the U.S. because of rising coronavirus infections there, but member countries will keep the option of allowing fully vaccinated U.S. travelers in.

The decision by the European Council to remove the U.S. from a safe list of countries for nonessential travel reverses the advice that it gave in June, when the bloc recommended lifting restrictions on all U.S. travelers before the summer tourism season.

The EU’s decision reflects growing anxiety that the rampant spread of the virus in the U.S. could jump to Europe at a time when Americans are allowed to travel to the continent. Both the EU and the U.S. have faced rising infections this summer, driven by the more contagious delta variant.

The guidance issued Monday is nonbinding, however. American tourists should expect a mishmash of travel rules across the continent since the EU has no unified COVID-19 tourism policy and national EU governments have the authority to decide whether or how they keep their borders open during the pandemic.

More than 15 million Americans a year visited Europe before the coronavirus crisis, and new travel restrictions could cost European businesses billions in lost travel revenues, especially in tourism-reliant countries like Croatia, which has been surprised by packed beaches and hotels this summer.

U.S. travelers would have to be immunized with one of the vaccines approved by the bloc, which includes Pfizer, Moderna, AstraZeneca and Johnson&Johnson.

Possible restrictions on U.S. travelers could include quarantines, further testing requirements upon arrival or even a total ban on all nonessential travel from the U.S.

In Washington, White House press secretary Jen Psaki stressed Monday that the EU travel restrictions applied to the unvaccinated, adding that “the fastest path to reopening travel is for people to get vaccinated, to mask up and slow the spread of the deadly virus.”

Paski told reporters that the U.S. government is working across federal agencies to develop its own policy for international travel, with the possibility of strengthening testing protocols and potentially ensuring that foreign visitors are fully vaccinated. But she said no final decision has been made yet.

The EU recommendation doesn’t apply to Britain, which formally left the EU at the beginning of the year and opened its borders to fully vaccinated travelers from the U.S. earlier this month.

The United States remains on Britain’s “amber” travel list, meaning that fully vaccinated adults arriving from the U.S. to the U.K. don’t have to self-isolate. A negative COVID-19 test within three days before arriving in the U.K. is required and another negative test is needed two days after arriving.

Meanwhile, the United States has yet to reopen its own borders to EU tourists, despite calls from the bloc to do so. Adalbert Jahnz, the European Commission spokesperson for home affairs, said Monday that the EU’s executive arm remained in discussions with the Biden administration but so far both sides have failed to find a reciprocal approach.

In addition to the epidemiological criteria used to determine the countries for which restrictions should be lifted, the European Council said that “reciprocity should also be taken into account on a case-by-case basis.”

The European Council updates the safe travel list every two weeks, based criteria related to coronavirus infection levels. The threshold for being on the EU safe list is having not more than 75 new COVID-19 cases per 100,000 inhabitants over the last 14 days.

The U.S. , meanwhile, is averaging more than 155,000 new coronavirus cases and 1,200 deaths per day, and several U.S. states have more COVID-19 patients in the hospital now than at any other time during the pandemic.

Authorities in Oregon are seeking extra refrigerated trucks because morgues are at capacity and Florida is in a similar situation after a week in which more than 1,700 people died from the virus in the state. Hospitals are desperately running out of staff in several states, and the start of the school year has brought even more fears that the outlook will worsen as millions of unvaccinated students return to their classrooms.

U.S. school districts have been struggling over whether to impose mask mandates, sometimes even suing in states where officials are against such requirements.

Vaccine hesitancy also remains a problem in many locations in the U.S., where 61% of the eligible population is inoculated against the virus. In contrast, Britain has fully vaccinated over 78% of adults and EU countries have inoculated nearly 70% of those over 18.