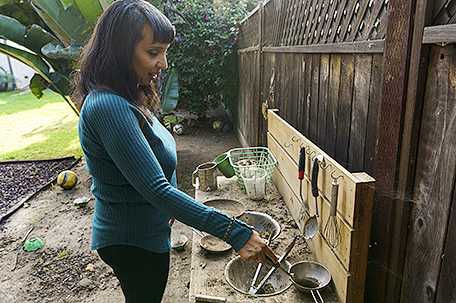 INDIANAPOLIS  — When Mary De La Rosa closed her toddler and preschool program in March because of the coronavirus pandemic, she fully expected to serve the 14 children again someday. In the end, though, Creative Explorers closed for good.

It left the families to search for other care options — and the three teachers to file for unemployment benefits.

“We kept trying to find a way,” said De La Rosa, who is of Mexican and Egyptian descent. “But eventually we realized there wasn’t one.”

The story of De La Rosa’s program in the Westchester neighborhood of Los Angeles is being repeated across the country as the pandemic’s effects ripple through childcare, disproportionately affecting Black and Latino-owned centers in an industry that has long relied on providers of color.

Policy experts say the U.S. spends a small fraction of federal funds on childcare compared to other industrialized nations, an underfunding exacerbated by COVID-19. Soon nearly half of the childcare centers in the U.S. may be lost, according to the Center for American Progress.

“Prior to the pandemic, the childcare system was fractured.” said Lynette Fraga, executive director of Child Care Aware of America. “Now, it’s shattered.”

Even before the coronavirus, many parents already faced an impossible choice — caring for their children or earning a living. But COVID-19’s impact on the system has worsened that, Fraga says, and its effects risk creating “childcare deserts,” leaving parents unable to return to work, reducing incomes and taking away early education opportunities crucial for a child’s development.

The U.S. childcare industry has long relied on Black and Latina women, with women of color making up 40% of its workforce, according to the Center for the Study of Child Care Employment. These women have been disproportionately affected by COVID-19. A July survey from the National Association for the Education of Young Children stated half of minority-owned childcare businesses expect to close permanently without additional assistance.

“The pandemic has unveiled how little access to support many of these women have,” Fraga said. “It’s exacerbated and spotlighted the inequities we’ve always known existed here.”

Economic disparities in the childcare industry fell along racial lines long before COVID-19, said Lea Austin, executive director of the Center for the Study of Child Care Employment.

Black early educators earn an average of $0.78 less per hour than white early educators, according to the center. While 15% of white women in childcare live below the poverty line, poverty rates for Black and Latina childcare workers are 23% and 22% respectively, according to a 2017 analysis by the National Women’s Law Center.

Rooted in slavery, professional childcare has historically been seen as the domain of women of color, says Shana Bartley, director of community partnerships for the National Women’s Law Center. As a result, she says, childcare is undervalued because of cultural biases suggesting the work of women of color is worth less.

“The roots of our childcare system goes all the way back to slavery when women who were enslaved and forced to care for others’ children did so with no pay,” she said. “Later, those domestic jobs were among the only available for Black women and other women of color. Because we have these antiquated systems and cultural biases rooted in sexism and racism, we’re not willing to adequately value these women and their work.”

This undervaluing was perpetuated by policies like the 1938 Fair Labor Standard Act, which guaranteed minimum wages and standardized hours but excluded domestic workers. Even today, Bartley says childcare providers of color are less supported with reduced access to federal funding and less support from banks when navigating licenses, loans and grants.

Angelique Marshall, director of Ms. P’s Daycare, feels lucky her center is still open to care for children with special needs in the Washington, D.C., area, especially as other Black and Latino-owned centers close around her.

Marshall, who is Black, serves half the number of children she used to. Her emergency funds bought cleaning and personal protective equipment, and operating costs have more than doubled.

“We’re not even making money,” she said. “It’s just about survival.”

Marshall said she’s surviving largely on loans and grants. But the process is exhausting, requiring her to file paperwork, log spending, save receipts and write reports. She said providers of color don’t have the resources and information they need to navigate grant applications and government offices.

“No one is telling us how to do this,” she said. “We’re figuring it out on our own. We have to fend for ourselves, and nobody seems to care.”

Maria Potts, director of Kids World in Falls Church, Virginia, is also relying on grants and PPP loans. With only seven of the original 14 children she served still in her program, Potts laid off three assistants and works 70-hour weeks.

She goes through three times as much paper towels, sanitizers and bleach. Much of her grant money goes to PPE and cleaning supplies.

“If it wasn’t for the Paycheck Protection Plan, I don’t think we would have survived,” said Potts, who is Latina.

Many of her colleagues in the Hispanic Association for Child Care in Northern Virginia have had to close. Potts has helped many of those remaining apply for grants. She says language barriers prevent many Spanish-speaking childcare business owners from accessing grants and support.

Christine Johnson-Staub, a senior policy analyst with the Center for Law and Social Policy, considers moving this legislation forward only the first step.

Johnson-Staub, who has worked in childcare policy for three decades, said workers need hazard pay and funds for cleaning supplies and PPE. She said federal dollars should be tracked to ensure they are allocated equitably, and policies should support fair compensation and job quality for childcare providers of color.

Austin recommends shifting the burden of childcare costs away from individual families and providers. Because parents pay most childcare costs, centers in lower-income communities of color are at a disadvantage.

“We don’t tell students that they can’t go to third grade unless they can pay for it,” she said. “And we don’t tell third-grade teachers that they’ll get paid based on what their students can afford. So why is that OK for childcare workers?”

Policy changes didn’t come soon enough to save De La Rosa’s center. After she sent parents a letter announcing the closing, Katie Nance was so devastated that she cried. Nance’s 5-year-old daughter, Lily, had been in the program for almost two years. Nance says the lessons De La Rosa taught Lily, as well as the perspective she offered as a Latina teacher, were crucial to her growth.

Today, De La Rosa’s house feels empty and quiet. She misses the children’s laughter. Her husband’s job has helped keep their family afloat but losing the business has forced them to rethink their budget. It has also had other effects — some more intangible, but just as real.

“It was like mourning someone,” De La Rosa said. “This school was such a huge part of who I am, and then all of a sudden it was gone.”

Alawfultruth: Black girl magic and the toll it takes…