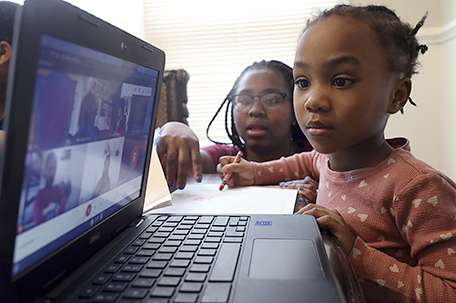 ABOVE PHOTO: Lear Preston, 4, who attends Scott Joplin Elementary School, participates in her virtual classes as her mother, Brittany Preston, background, assists at their residence in Chicago’s South Side. Amid mounting tensions about reopening schools, the Centers for Disease Control and Prevention planned to release long-awaited guidance Friday, Feb. 12, on what measures are needed to get children back into the classroom during the pandemic. (AP Photo/Shafkat Anowar, File)

By Collin Binkley And Mike Stobbe

The nation’s top public health agency said Friday that in-person schooling can resume safely with masks, social distancing and other strategies, and vaccination of teachers, while important, is not a prerequisite for reopening.

The Centers for Disease Control and Prevention released its long-awaited road map for getting students back to classrooms in the middle of a pandemic that has killed nearly 480,000 people in the U.S. But the agency’s guidance is just that — it cannot force schools to reopen, and CDC officials were careful to say they are not calling for a mandate that all U.S. schools be reopened.

Officials said there is strong evidence now that schools can reopen, especially at lower grade levels.

Recommended measures include hand washing, disinfection of school facilities, diagnostic testing and contact tracing to find new infections and separate infected people from others in a school. It’s also more emphatic than past guidance on the need to wear masks in school.

“We know that most clusters in the school setting have occurred when there are breaches in mask wearing,” Dr. Rochelle Walensky, the CDC’s director, said in a call with reporters.

The guidance was issued as President Joe Biden faces increasing pressure to deliver on his promise to get the majority of K-8 schools back to in-person teaching by the end of his first 100 days in office. He acknowledged that the goal was ambitious, but added, “It is also a goal we can meet if we follow the science.”

Biden said schools will need more money to meet the CDC’s standards and called on Congress to pass his COVID-19 package quickly to get $130 billion in aid to schools.

“We have sacrificed so much in the last year,” Biden said in a statement. “But science tells us that if we support our children, educators and communities with the resources they need, we can get kids back to school safely in more parts of the country sooner.”

The new guidance includes many of the same measures previously backed by the CDC, but it suggests them more forcefully. It emphasizes that all of the recommendations must be implemented strictly and consistently to keep school safe. It also provides more detailed suggestions about what type of schooling should be offered given different levels of virus transmission, with differing advice for elementary, middle and high schools.

“Vaccinating teachers can provide “an additional layer of protection,” she said.

Asked how the guidance differed from that offered by the Trump administration, Walensky said, “We’ve used stronger languages than prior guidance. We’ve been much more prescriptive here as to putting some guardrails on what can and should be done to get to a safe reopening.”

“And I can assure you that this is free from political meddling,” she added.

There’s wide agreement that learning in the classroom is more effective and that students can face isolation and learning setbacks at home. But teacher’s unions in some areas say schools have failed to make buildings safe enough to return.

The new guidance was embraced by both sides of the debate, with each saying it bolstered their position. House Minority Leader Kevin McCarthy said its further evidence that schools are equipped to reopen now.

The new information “affirms what many of us, including students and parents, have known for months: It is critical for schools to open as safely and as soon as possible,” he said.

Becky Pringle, president of the National Education Association, applauded the guidance but said schools are failing to meet it. Most still have outdated ventilation systems, she said, and few have the type of virus testing programs suggested by the CDC.

“CDC standards still aren’t being met in too many of our schools,” Pringle said. “We can and must provide students the opportunity to return to in-person learning, but we also must ensure that every school has the safety measures in place to keep students and educators safe.”

CDC officials emphasized that in-person learning has not been identified as a substantial driver of coronavirus spread in U.S. communities, and that transmission among students is now considered relatively rare.

The CDC also stressed that the safest way to open schools is by making sure there is as little disease in a community as possible. The agency urged local officials to assess whether a bad outbreak is occurring in a community when making decisions about sending adults and children into schools.

The guidance included a color-coded chart, from blue to red, on assessing community spread, including rates of new cases per 100,000 people and the percentage of positive tests.

That said, high community transmission does not necessarily mean schools cannot be open — especially those at the elementary level. If school mitigation measures are strictly followed, the risk of spread in the schools should still be low, the guidance suggests.

The document suggests that when things get risky, elementary schools can go hybrid, providing in-person instruction at least on some days, but that middle and high schools might go virtual.

“The older children get … the more they act like adults in terms of transmission and disease,” Walensky explained. “So, when we are in areas of high transmission, we have pushed more for elementary school hybrid learning.

Government officials estimate that about 60% of K-12 schools right now have some form of in-person learning going on, though in many cases it may be part-time.

Schools also can tighten up restrictions for the in-person learning that is going on. For example, the CDC continues to recommend that children be spaced 6 feet apart in school settings. But it should be required when there’s a worrisome surge of new infections in the community, said Greta Massetti, a CDC official who led much of the work on the new guidance.