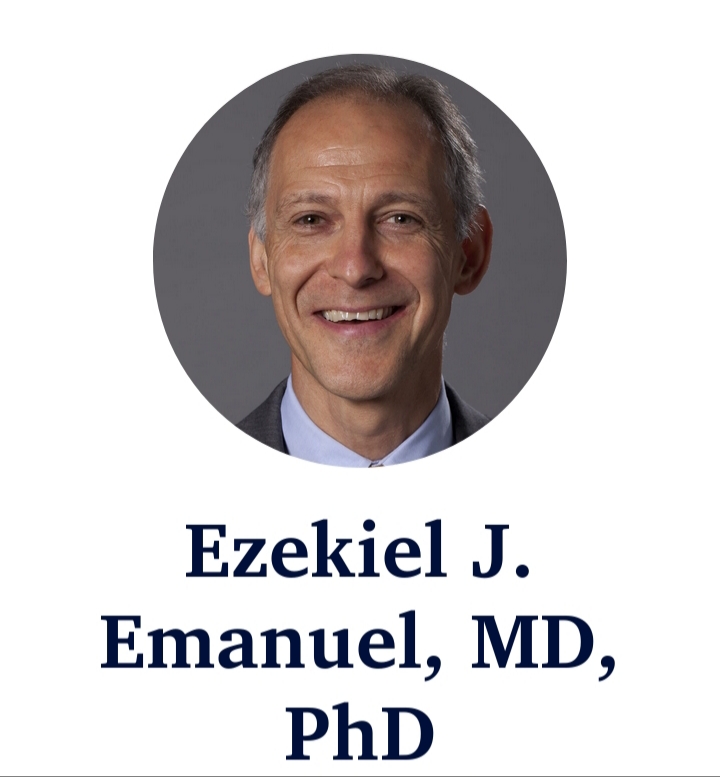 According to 6abc, Philadelphia-based doctor Ezekiel Emanuel, who previously served on Biden’s Public Health Advisory committee during the primary will be one of 13 members and co-chairs named to the group.

Via 6abc, “Emanuel is an oncologist and Vice Provost for Global Initiatives and chair of the Department of Medical Ethics and Health Policy at the University of Pennsylvania. From 2009 to 2011, Emanuel served as special advisor for health policy to the director of the White House Office of Management and Budget. Since 1997, he has served as chair of the Department of Bioethics at The Clinical Center of the National Institutes of Health (NIH).”

The board, including doctors and scientists who’ve served in previous administrations, will be tasked with taking the virus proposals that Biden released during the campaign and turning them into a blueprint the new president can enact after he is inaugurated in January.

The U.S. is now averaging more than 100,000 new coronavirus infections a day, frequently breaking records for daily cases. Hospitals in several states are running out of space and staff, and the death toll is soaring.

Public health officials warn that the nation is entering the worst stretch yet for COVID-19 as winter sets in and the holiday season approaches, increasing the risk of rapid transmission as Americans travel, shop and celebrate with loved ones.

“The next two months are going to be rough, difficult ones,” said Dr. Albert Ko, an infectious disease specialist and department chairman at the Yale School of Public Health. “We could see another 100,000 deaths by January.”

“Dealing with the coronavirus pandemic is one of the most important battles our administration will face, and I will be informed by science and by experts,” Biden said in a statement Monday.

Biden pledged during the campaign to make testing free and widely available; to hire thousands of health workers to help implement contact-tracing programs; and to instruct the Centers for Disease Control and Prevention to provide clear, expert-informed guidelines, among other proposals.

As the Democratic nominee, Biden made President Donald Trump’s mishandling of the pandemic a central focus of his campaign. But much of what Biden has proposed will take congressional action, and he’s certain to face challenges in a closely divided House and Senate.

“I’m not running on the false promises of being able to end this pandemic by flipping a switch. But I do promise this: We will start on day one doing the right things,” he said during a campaign event last month.

Dr. Phillip Coule, chief medical officer at Augusta University Medical Center in Georgia, said he hopes the nation can get past the political divisions that have complicated the response to the virus now that the election is over.

“Now that we are post election, let’s just handle this based on the science and not the politics of this disease and the pandemic,” he said.

New York Gov. Andrew Cuomo, a Democrat, said he believes even the most ardent COVID-19 deniers will strike a more conciliatory tone as Trump’s election defeat sinks in.

“I think the political pressure of denying COVID is gone,” he said Sunday on ABC’s “This Week.” “I think you’ll see scientists speak with an unmuzzled voice now. And I think the numbers are going to go up, and Americans are going to get how serious this is.”

The president-elect is limited in what he can legally do before he’s sworn in, but he and his transition team should begin laying the groundwork immediately, said Dr. Leana Wen, a public health professor at George Washington University and former health commissioner for Baltimore.

Establishing some consensus with state leaders on a national response, including a nationwide mask mandate, should be a top priority, she said. Opposition to wearing masks remains a stubborn issue, particularly in some of the hardest-hit states.

“Each state is acting fairly autonomously on their own policies, and we’ve seen how that’s played out,” said Ko, the Yale expert. “This disease needs national and global responses.”

Overcoming months of mixed messaging on the pandemic is another uphill climb that Biden must start addressing during his transition, said Angela Rasmussen, a virus researcher at Columbia University in New York.

“The past year of misinformation, confusion and gaslighting from the White House has really left people without any trust that our government is capable of handling this,” she said. “It’s going to be critical to begin communicating that, yes, this administration will be led by the science.”

During his first remarks as president-elect, Biden said Saturday that his COVID-19 task force will create a plan “built on bedrock science” and “constructed out of compassion, empathy and concern.”

His surrogates, meanwhile, have spent the days since the election assuring the public the administration will be ready to respond to the pandemic.

“I think there’s a sense of urgency throughout,” Pete Buttigieg, a former Democratic presidential hopeful who is now on Biden’s transition team, said on Fox News Channel’s “Fox News Sunday.” “We know that every day is bringing more loss, more pain and more danger to the American people, and it’s why he’s not waiting until he’s taking office to begin immediately assembling people who have the right kind of expertise and planning to actually listen to them.”

There’s also hope in the wider medical community that a Biden presidency will help restore U.S. leadership on global public health challenges, including the development and distribution of a vaccine when it becomes available.

Dr. Soumya Swaminathan, the chief scientist of the World Health Organization, said she was more optimistic that a Biden administration would join Covax, a WHO-led project aimed to help deploy vaccines to the neediest people worldwide, whether they live in rich or poor countries.

“Everyone recognizes that for a pandemic, you cannot have a country-by-country approach. You need a global approach,” Swaminathan said.

But in Kansas, one of the states seeing a significant surge in virus cases in recent weeks, at least one hospital official remains skeptical about what a new president can do to turn the tide of the pandemic in the U.S.

“I think the damage is done,” said Kris Mathews, the administrator of Decatur Health, a small hospital in the rural northwest part of the state. “People have made up their minds about how they react to it.”

Associated Press writers Heather Hollingsworth in Kansas, Alexandra Jaffe and Thomas Strong in Washington and Jamey Keaten in Geneva contributed to this story.