A year after Wuhan lockdown, a world still deep in crisis 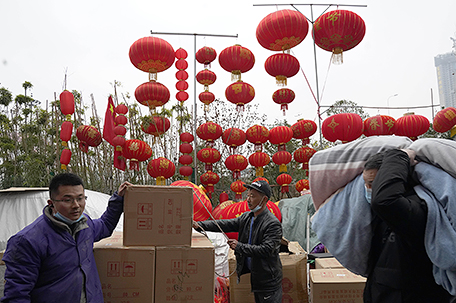 ABOVE PHOTO: Workers move stock near lanterns on sale for the upcoming Chinese Lunar New Year in Wuhan in central China’s Hubei province on Friday, Jan. 22, 2021. Life appears to be back to normal on the eve of the anniversary of the 76-day lockdown in the central Chinese city where the coronavirus was first detected. (AP Photo/Ng Han Guan)

Nearly a year to the day after the Chinese city of Wuhan went into lockdown to contain a virus that had already escaped, President Joe Biden began putting into effect a new war plan for fighting the outbreak in the U.S., Germany topped 50,000 deaths, and Britain closed in on 100,000.

The anniversary of the lockdown Saturday comes as more contagious variants of the coronavirus spread and efforts to vaccinate people against COVID-19 have been frustrated by disarray and limited supplies in some places. The scourge has killed over 2 million people worldwide.

In the U.S., which has the world’s highest death toll at over 410,000, Dr. Anthony Fauci said a lack of candor about the threat under President Donald Trump probably cost lives.

Fauci, who was sidelined by Trump, is now the chief medical adviser to Biden in an ambitious effort to conquer the virus. He told CNN that the Trump administration delayed getting sound scientific advice to the country.

“When you start talking about things that make no sense medically and no sense scientifically, that clearly is not helpful,” he said.

Biden signed a series of executive orders Thursday to mount a more centralized attack on the virus and has vowed to vaccinate 100 million people in his first 100 days, a number some public health experts say is not ambitious enough.

Dr. Eric Topol, head of the Scripps Research Translational Institute, said the U.S. should aim to vaccinate 2.5 million a day.

“This was already an emergency,” Topol said, but with more contagious mutations of the virus circulating, “it became an emergency to the fourth power.”

In Britain, where a more transmissible variant of the virus is raging, the death toll hit close to 96,000, the highest in Europe. And the government’s chief scientific adviser warned that the mutated version might be deadlier than the original.

Patrick Vallance cautioned that more research is needed but that the evidence suggests that the variant might kill 13 or 14 people out of every 1,000 infected, compared with 10 in 1,000 from the original.

Germany extended its lockdown this week until Feb. 14 amid concern about the mutant viruses. Some nations are imposing or considering new travel restrictions for the same reason. France said it will require a negative test from travelers arriving from other European Union countries starting Sunday. Canada said it may force visitors to quarantine in a hotel at their own expense upon arrival. Canadian Prime Minister Justin Trudeau warned the country: “No one should be taking a vacation abroad right now. If you’ve still got one planned, cancel it. And don’t book a trip for spring break.”

In another apparent setback, AstraZeneca said it will ship fewer doses of its vaccine than anticipated to the 27-country EU because of supply chain problems.

Amid the crisis, Japan is publicly adamant it will hold the postponed Olympics in July. Many experts believe that to pull that off, the nation will have to vaccinate all 127 million citizens, an effort that may not even begin until late February.

The 76-day Wuhan lockdown began a year ago with a notice sent to people’s smartphones at 2 a.m. announcing the airport and train and bus stations would shut at 10 a.m. It eventually was expanded to most of the rest of Hubei province, affecting 56 million people. By the time of the lockdown, the virus had spread well beyond China’s borders.

Wuhan has largely returned to normal.

The rollout of shots in the U.S. has been marked by delays, confusion and, in recent days, complaints of vaccine shortages and inadequate deliveries from the federal government as states ramp up their vaccination drives to include senior citizens as well as teachers, police and other groups. At the same time, the Centers for Disease Control and Prevention reported Friday that of nearly 40 million doses distributed to the states so far, just 19 million have been dispensed.

Why there are reports of shortages when so many doses are apparently going unused is not entirely clear. But some vaccination sites are believed to be holding back large quantities to make sure that people who got their first shot receive the required second one on schedule a few weeks later.

At the rate vaccines are being delivered, Alabama officials said it would take two years to vaccinate all adults in the state of 5 million people.

“Every state had the idea that they were going to get much more vaccine than they ultimately got,” said Scott Harris, head of the state Department of Public Health. “There just wasn’t enough vaccine to go around.”

Louisiana said it plans to set up mass vaccination events but can’t do so until it receives larger quantities of vaccine. The state said it has been receiving about 60,000 doses weekly for the last few weeks and was told by federal officials to expect similar allocations for the next month or so.

“We all are asking for the exact same thing,” Gov. John Bel Edwards said of the nation’s governors. “We want more vaccine as soon as we can possibly get it, and we want more lead time to know how many doses we’re going to get so that we can do a better job of planning at the state level.”

In Boston, nearly 2,000 doses of the vaccine were spoiled at a Veterans Affairs hospital after a contractor accidentally unplugged a freezer.

Biden pledged to set up Federal Emergency Management Agency mass vaccination sites, but some states said they need more doses of the vaccine, not more people or locations to administer them.

“We stand ready, willing and able to handle it,” Florida Gov. Ron DeSantis said. “Trying to find FEMA set up sites, first of all, that would take like 30 days. It’s not necessary in Florida. I would take all that energy and I would put that toward more supply of the vaccine.”