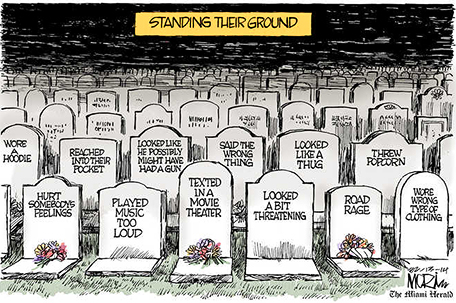 ‘Stand your ground’ laws have not only become a lightning rod for controversy surrounding the use of deadly force in one’s own defense, and a rallying point around which organized racists have been galvanized, but also an subject of concern for African American academicians.

Ever since George Zimmerman invoked the stand your ground defense in the shooting of Trayvon Martin in Sanford Florida back in February of 2012, statistics show a marked increase in the number of murder and non-negligent manslaughter cases where the law was invoked as a strategy of defense.

In November 2013, another Black Florida teen, Jordan Davis, was gunned down when Michael Dunn, a 47 year-old software developer, shot him after Davis and his car full of friends refused to turn down the loud music coming from the cars booming speakers. According to witnesses, Dunn approached the  teens and asked them to crack the music down; at first, the young men complied—but then turned the volume back up as Dunn began to walk away. The witnesses said that Dunn then turned back to the car, pulled out a pistol and fired into the car. Davis was killed instantly.

Last week, Dunn received a guilty verdict on four of the five charges leveled against him. According to legal experts who commented on the case, Dunn’s guilty verdict will carry a minimum 75 -year- sentence. A mistrial was declared on the charge of first degree murder. CNN, commenting on the mistrial ruling, speculated that an agreement between Florida and Dunn’s defense attorneys could be reached raising the possibility that the amount of years that he might be jailed be changed from consecutive to concurrent. In that case, a guilty plea might work to the benefit of the shooter.

This is compared to the 20 years that Marissa Alexander received for merely shooting in the air to scare her ex after he ignored an injunction leveled against him in a harassment suit . To many observers, the difference in sentencing speaks to the racial bias inherent in the American justice system.

“Some observers have said comparing the disparity between Alexander and Dunn is like comparing apples with oranges—after all, Alexander is Black and Michael Dunn is white,” said Jamillah Harris, an adjunct history professor at Tennessee State University. “But what these differing results ultimately speak to is the continuing divide that frames judicial attitudes toward Blacks and whites in America.

“As we can see from letters Dunn sent to his daughters that were published in the press, he obviously felt a sense of entitlement to administer death based on the race of the victims.”

A recent University of Texas study that looked into such shootings seemed to confirm Harris’ assertion. The study showed an 8 percent increase in shooting in states that have enacted such laws.  The study utilized FBI data to compile the numbers. A separate study undertaken by the Urban Institutes Justice Policy Center of 43,000 homicides between 2005 and 2009  found that the killing of Black people by whites was more likely to be considered justified  than the killing of whites by Blacks. According to the Justice Policy Center’s data, whites were 250 percent more likely to have been justified in killing a Black person than when they kill another white person.

In the meantime, groups of organized racists—just as they did in the aftermath of the Zimmerman verdict—are coming out in support of Dunn.

None of this means that Dunn will necessarily skate in this case, however. According to the NewsOne website, Florida special prosecutor Angela Corey has decided to retry on the murder charges, thus eschewing the customary double jeopardy clause.

This writer was living in London a few years ago when the shooting of an unarmed Black teenager by the London Metropolitan Police’s special gun squad (patrol cops do not carry guns in London) kicked of a week of city wide violence and destruction. Here, in the good ol’ USA, young Black men are gunned down regularly by law enforcement officers and there’s hardly a whimper; in fact Right wing pundits—and quite a few regular citizens—applaud these lawless vigilantes.

Despite all of the lofty proclamations made in this country about equality and the sanctity of both civil rights and life, the truth is, the lives of young Black males aren’t worth a plugged nickel.  And the paradigm goes from the top down—from the misguided politicians who create and enact ‘stand your ground laws’ to the citizenry that makes no big deal over the lost lives of Black children.

There is no empathy in this country, no righteous indignation over the death of innocents, and no sympathetic outcry for the parents who have to bury their children way too soon. The social and racial divide in America remains so vast that many of us cannot commiserate.

This is a sad testimony about the state of our relations, our psyches and our values.

How the new Black politician will take on 21st Century