Will the Lame Duck quack? 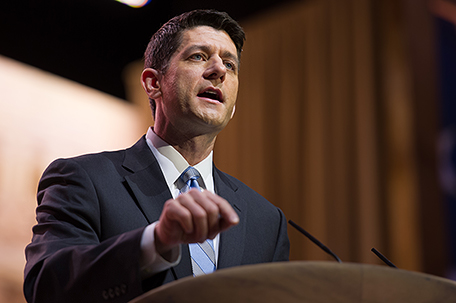 The rats are leaping off the sinking ship!

Paul Ryan says he wants to spend more time with his teenagers, but likely he also doesn’t want to be part of the losses Republicans are likely to experience in November (unless the Dems mess up, which is not impossible). By April 13, there were 41 Republicans who said they would not run for re-election, for varying reasons or no reason at all. Ryan’s citing of personal reasons seems disingenuous. Most teens aren’t clamoring for more daddy time. Many of them hardly speak to their parents.

Ryan says he will serve out his term, and serve out his speakership, but his announcement has caused chaos in his party. And, while he has not used his announcement to criticize his president, many think that he has had about enough of making excuses for the man who wants to grab women by the genitals, threaten North Korea and Syria, build walls, indulge in racist rants, and more. Since Ryan is so interested in spending time with his children, how does he explain 45 to his teens, especially to his 16-year-old daughter?

At about the same time Ryan announced that he would not run again, Florida Republican Congressman Dennis Ross made the same announcement to his staff. In a CNN interview shortly afterward, he cited “party polarization” and the “lack of civility and respect” as part of his reason for not running. He also exhibits his own intellectually limited pettiness by throwing too much shade on some of the young people who have emerged as activists in Florida. Young people, he says, know how to protest, but they don’t know “the process.”  It seems to me that the Parkland students and others they have joined with have exhibited enough knowledge of “the process” to get Florida legislators to change a few laws. And these young people promise to be an electoral force in 2018. Maybe that’s why Republicans are leaping off the Titanic as it is poised to hit an iceberg.

The party that captured the Presidency typically loses some Senatorial and Congressional seats in a mid-term election. Sixty-three Democrats surely did in 2010, partly because of resistance to the Affordable Care Act, and partly because of resistance to President Barack Obama himself. But fewer than 20 Democrats chose not to run for reelection. So far, a record 41 Republican rats are jumping off 45’s sinking ship. Some of them are talking openly of impeachment, given continuing developments in the Mueller probe. Others are repulsed by the drip, drip, drip, revelations of 45’s immoral behavior. Still, others are concerned about the ways the Oval Office has become a piggy bank for the President and his family. The Republican family is a fractured one and they are cruising for a bruising!

Speaker Paul Ryan says he did what he came to do in Washington – he shepherded through a tax reform bill that “simplified” our taxes. But the man who was known as a deficit hawk also passed out corporate goodies as if they were Girl Scout cookies, and had a role in increasing the deficit to more than a trillion dollars. If that’s what he came to do, he might as well hang his conservative mantle up. These next few months will be interesting as the lame duck speaker attempts to manage legislation and, perhaps, attack social programs like Medicare and Social Security.

But will the Lame Duck speaker quack? He has little to lose now that he says he will not run for his congressional seat again. He also says he will not run for office, but who believes that? Further, his best qualification to run for office might be the ways, in these next few months, he challenges the president that he is clearly repulsed by. Will he be a champion for true conservatism, not the cronyism that 45 embodies? Will he raise questions about the crooked practices of Cabinet members who have never met a charter plane they could not pass up? The Lame Duck could provide a service to his party and to our nation if he would simply quack. But he may have been too compromised to open his mouth.

Is there no decency?