What it will take to put the cuffs on Trump 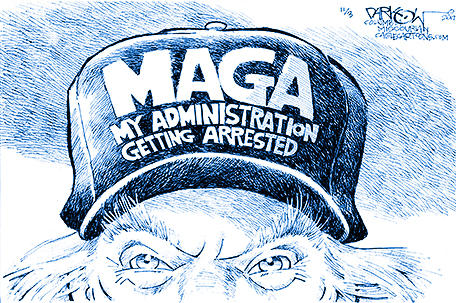 Nothing gives the legions of Trump loathers more delight than the photoshopped photos that float around the internet of President Donald Trump being marched out of the White House sandwiched between two FBI agents in handcuffs. The superimposed photos are intriguing, entertaining, and funny. But they are just that — fake news. However, special counsel Robert Mueller’s indictment of former Trump campaign officials Rick Gates and Paul Manafort, and the guilty plea of former Trump advisor George Papadopoulos gives a tiny but tantalizing hint that there may be more past or present Trump officials on the legal hot seat who might point an incriminating finger at Trump. That would be no laughing matter for the White House.

Following the indictments, Trump quickly tweeted that Gates and Manafort were long gone from his campaign. Therefore, any talk of collusion between he, Putin and any other shadowy Russians, to smear, slander and discredit Hillary Clinton is just, well, more fake news. His point is there’s zero proof of collusion. He’s right. The proof would have to be more than just an ex-Trump campaign official claiming that Trump ordered election tampering or that there is a smoking gun email or document around somewhere that shows Trump’s direct involvement in election tampering by the Russians.

That document is what it will take to prove the legally vague and ill-defined charge of “collusion.” Some legal analysts even claim that the alleged “collusion” that many believe Trump engaged in with the Russians has no legal meaning in Mueller’s probe. That it’s not a provable criminal offense.

However, one thing that Mueller can do to bring the issue with Trump to a legal head is to subpoena him to talk to his office or — the even more remote possibility — to testify before a federal grand jury. Mueller has been tight-lipped so far on this legal move. If he did demand Trump appear and talk, then the worst that could happen is that Trump would lie under oath about an email from him, or a meeting that he or a member of his team had with an Russian official — in which there was talk of election manipulation. This would certainly be the legal smoking gun that is required to nail Trump with a criminal charge.

This happening is a huge stretch. First, Trump could try to quash the subpoena by claiming executive privilege or national security concerns. This would touch off a colossal legal haggle between the White House and Mueller over the validity of the claim with Trump claiming that it was just another politically- inspired effort to harass and demean him. If that didn’t work and he had to testify, he would have a small army of attorneys whispering in his ear what he can say and how he should say it to avoid falling into the legal trap of being nailed for giving false testimony.

Beyond giving false testimony and obstruction, Mueller could go after Trump on a conspiracy charge. To make it stick, he’d have to show that Trump huddled with at least one other person to commit an offense against or defraud the U.S. But who is the other person? And what and when did they meet and what did they say or do that constituted a criminal act? There’s evidence that Trump Jr., Manafort and Trump’s son-in-law, Jared Kushner, met with the Russians. The question is did they talk about election hanky-panky. If so, did they “collude” with the Russians at those meetings to “defraud” or “subvert” America’s electoral process? This would require a lot more than proving that they met. Mueller would need some confirming document such as emails or notes made of the meeting to back up an incriminating charge of conspiracy.

Beyond savaging Mueller and the probe as basically a political expedition, Trump did try to seize the high ground in August when he sent a letter to Mueller rehashing the reasons he fired former FBI Director James Comey. This was the spark that set off the hunt for a charge against Trump.

His reason for the firing boiled down to his alleged dissatisfaction with his handling of the Clinton email investigation and the supposed investigation into the alleged Russia presidential election meddling. There is no evidence of any existence, let alone concealment, destruction or tampering, of a document that would show that Trump ordered or demanded that Comey stand down from investigating him. In fact, Trump has waved around the quip he made to Comey about being pleased that he found supposedly nothing to implicate him in any wrongdoing.

Mueller hit the relatively small fry down the Trump food chain and his hint of more to come doesn’t tell how far up the chain this will go. As long, though, as Mueller probes there will be the possibility of turning up that damaging document or statement from someone connected with Trump that does point an incriminating finger at him. This is the only thing that would make the phony pictures of Trump being led away in cuffs a reality.

Earl Ofari Hutchinson is an author and political analyst. He is an associate editor of New America Media. His latest book is, The impeachment of President Trump? (Amazon Kindle) will be released in August. He is a weekly co-host of the Al Sharpton Show on Radio One. He is the host of the weekly Hutchinson Report on KPFK 90.7 FM Los Angeles and the Pacifica Network.