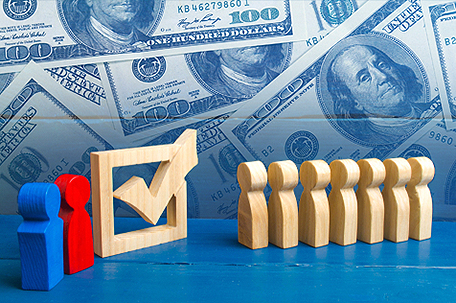 Democrats started this presidential campaign season with more than 20 candidates.  Eventually, it dropped to about a dozen, with, so far, only five of those “qualified” to appear on the next debate stage.  But debate performance doesn’t seem to matter much. Both Sen. Kamala Harris and former Obama cabinet member Julian Castro had excellent debate performances, and yet they have dropped out of the race.

With just $9 million in the bank, Sen. Harris said she couldn’t see her way clear to the nomination given her extremely limited resources. Castro, matching Harris in grace and reflectiveness, said: “It just wasn’t our time.”  He, too, felt he did not have enough money in the bank to compete.  It almost certainly would have helped these candidates qualify if they had the resources, say, of former New York Mayor Michael Bloomberg, who pumped $100 million into his campaign in just one month!

In fairness, though, it is essential to note that Sen. Bernie Sanders raised a whopping $34.5 million in the fourth quarter of 2019 alone.  Mayor Pete Buttigieg and former VP Joe Biden raised more than $20 million in that quarter, and Sen. Elizabeth Warren came close.  The deadline for filing finance reports is later this month, so I’m cautious in concluding based on news articles and partial reports. Still, generally, those who have something to crow about put their numbers out there early.

And for some, money isn’t the only issue.  Did they meet the thresholds the Democratic party set for debate qualification?  Do they and their advisors think they can win?  What are the polls saying?  So even though Kristen Gillibrand had $14.9 million in the bank when she dropped out of the race last August, she was not polling well and failed to qualify for the September debate.  Meanwhile, Sen. Corey Booker did not qualify for the last debate, and has since dropped out.

Although entrepreneur Andrew Yang is still in the race, the Democratic field is mostly white, and the January debate stage on January 14, 2020, in Des Moines, Iowa was all-white.  The white folks on the stage may be “qualified”, but I find them no more qualified than, say, Julian Castro and Kamala Harris.  Their greatest flaw was the inability to compete in this multi-million dollar cacophony of voices.

Neither Harris nor Castro will suffer much for dropping out of the race.  Some say that Castro will run for governor of Texas.  Harris has three years more of a Senate term, and she is an effective presence in Capitol Hill.  I didn’t like seeing either of them dropping out of the race, but the loss is ours, not theirs.  The way the election cycle works, candidates can get a big boost if they can win either Iowa or New Hampshire.  But with the debate qualification set so high, voters in those states will not have the opportunity to see some great possibilities in action because they don’t qualify for the debates.

To be sure, it was useful to narrow the field of candidates from an unwieldy number to a more manageable one.  And candidates all appreciate the fact that they have more time to go in-depth answering questions.  Still, if it’s an all-white debate stage, what does that say about progress in this nation?  What does it say about the Democratic Party, which presents itself as a big-tent party that has embraced diversity?

For Democrats, there are three keys to winning this election.  First, Dems must engage “new voters,” including young people and first-time voters.  Next, Dems must monitor the rules around elections so that they do not discriminate and scrutinize the ways people are removed from the voting rolls.  Finally, and most importantly, Democrats must place significant effort on getting out the vote in November (and during the primaries), and new voters and especially communities of color, must be targeted.

Election protection organizations have the monitoring issue covered, and there are likely to be massive GOTV (get out the vote) efforts led by civil society organizations.  But what engages new voters?  They must feel that the political process reflects them.  Already Latino voters are concerned that Democrats aren’t vying for their vote.  And African American voters think that the Democratic Party takes them for granted.

To engage new voters, perhaps Democrats need to examine their rules to embrace more candidates of color.  And they need to fight for legislation that makes it easier to vote.  Democrats like to call themselves candidates of the “underdog.”  But when billionaires like Steyer and Bloomberg come sauntering through the door, concern for the underdog seems to go out of the window.

Dr. Julianne Malveaux is an economist, author, media contributor and educator. Her latest project — MALVEAUX! — on UDCTV is available on www.youtube.com. For booking, wholesale inquiries, or for more info, visit: www.juliannemalveaux.com

Castro’s exit is latest blow to diversity of 2020 field