Will Blacks also get treatment not jail for opioid addiction? 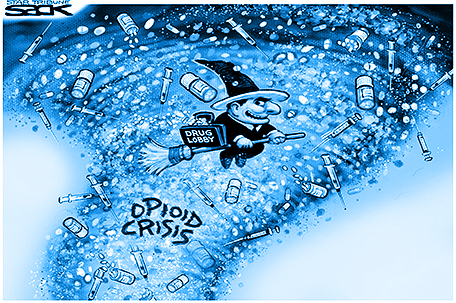 There was mild surprise when the news hit that the opioid death rate among Blacks is fast approaching that of Whites. Surprise because the opioid epidemic has been almost universally framed as a crisis that has slammed mostly Whites in rural and suburban areas. The operative words from moment one have been “epidemic” and “crisis” when describing soaring opioid use, addiction, and deaths among whites. This drove home the notion that opioid dealing and use is not really a crime, but a health issue.

The racial coding was glaring and unmistakable when posed squarely against how drug use was treated among Blacks. There was no presidential conference at the White House. There was no frantic and loud call by Republican congresspersons to spend billions on counseling, treatment, education and prevention programs. There was no avalanche of heart ranching, sympathy dripping editorials, op-eds, news reports, and news features on the personal tragedy and devastation from opioid addition and deaths. And there were certainly no ringing calls by police and prosecutors to scrap arrests, jail, and tough prosecution for opioid users and dealers.

It was, of course, a totally different story with crack cocaine and other drug use by Blacks.

That ignited a frenzy bordering on mania to wage a ruthless, relentless and naked drug war on minorities, especially African-Americans. The racial war that was and still is blatantly evident in the drug war has even dipped down into who is arrested, tried, convicted, and sentenced say for marijuana use and sale. In every state, Blacks are still far more likely to be arrested than Whites.

The gaping disparities in arrest numbers for Blacks and Whites came at a time when public attitudes had radically softened on both personal and medicinal marijuana use. Many states and locales have drastically decriminalized marijuana possession, three states have legalized its use, and other states are poised to vote on legalization. Even worse, the race tinged arrest numbers come at a time when the incidences of nearly every other type of crime has plummeted.

The racial targeting was so odious and evident that former President Barack Obama and former Attorney General Eric Holder spoke out repeatedly against the disparities in drug arrests and prosecutions. They tried to tweak things where they could to take the hard foot off the pedal on drug arrests and prosecutions by the Feds. Their efforts quickly were tossed out the window by Holder’s replacement, Jeff Sessions, who with much fanfare made clear that the War on Drugs was back on in full force and there would be no pity given. He didn’t hint there was any racial tinge to it. But he didn’t have to. Given the past, the prime victims of the drug war would be the same ones as before, minorities, especially Blacks.

The truth that Trump and Sessions would never admit is that the top-heavy drug use by Whites has never stirred any public outcry for mass arrests, prosecutions, and tough prison sentences for them, many of whom deal drugs that are directly linked to serious crime and violence. Whites unlucky enough to get popped for drug possession are treated with compassion, prayer sessions, expensive psychiatric counseling, treatment and rehab programs, and drug diversion programs. And they should be. This is also the case with opioid addiction. Yet so should those Blacks, and other non-Whites victimized by discriminatory drug laws.

But will they now that opioid addition and deaths are no longer the exclusive province of Whites? At the very least, the report that drug victimization knows no color line should call into question why people use and abuse drugs in the first place — and if it is really the government’s business to turn the legal screws on some drug users while turning a blind eye to others?

The greatest fallout from the racial double standard in drug law enforcement is that it is a double-edged sword. On the one hand, it further embeds the widespread notion that the drug problem is exclusively a Black problem. This makes it easy for on-the-make politicians to grab votes, garner press attention, and balloon state prison budgets to jail more Black offenders, while continuing to feed the illusion that we are winning the drug war. On the other, the treatment not jails push to deal with the opioid crisis among whites permits much of the public and lawmakers to delude themselves that the nation has become much more prudent and enlightened in how it views the drug fight.

In a statement in New Jersey in August, Trump boldly declared the opioid crisis “a national emergency.” He again made the call and pledge for millions more on treatment and prevention programs. The test will be whether Blacks will be included in this benign and enlightened view of how the nation will deal with drug addiction.

Earl Ofari Hutchinson is an author and political analyst. He is the author of The Obama Legacy (Middle Passage Press). He is a weekly co-host of the Al Sharpton Show on Radio One. He is the host of the weekly Hutchinson Report on KPFK 90.7 FM Los Angeles and the Pacifica Network.

The opioid crisis in Black and White