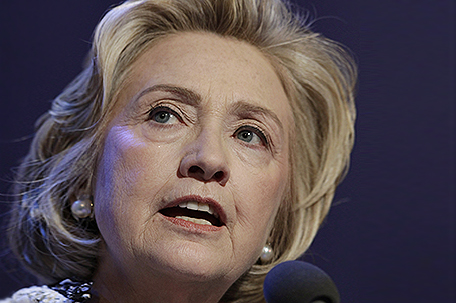 ABOVE PHOTO: Hillary Rodham Clinton, former U.S. Secretary of State, speaks at a seminar on “Women Decision-Makers in the Global Economy” at the Clinton Global Initiative, Wednesday, Sept. 25, 2013 in New York.

Hillary Clinton is still playing coy on the one question that many incessantly ask, and that’s will she run? Her response in a recent interview to the politically tantalizing question was simply to say that she will do what’s best to advocate for the values and policies she thinks are right for the country.  Her cryptic response certainly left the door wide open for a run. There’s no doubt that in the coming months the pressure will be intense for her to formally announce her candidacy.

The reason is obvious. Her experience in international relations and her hands on administrative experience in White House policy affairs has already insured the allegiance of millions of voters to her. She is the one sure Democrat who at this point beats any GOP contender. Millions of women see Clinton as her gender’s Obama. Her presidency would mark a historic presidential breakthrough for women. She would be a role model and inspiration for millions of women young and old in the world’s top political power spot. There’s the perception that she has the political savvy to wage the blood battles with a GOP controlled Congress.

GOP leaders fear that, and haven’t waited for her to affirm her presidential candidacy. They have long assumed she will be the Democratic contender in 2016 and the various GOP attack teams have wasted no time in shoveling up every scintilla of old and new dirt it can dredge up against her to torpedo her candidacy before it’s official.

The GOP isn’t banking solely on shoveling dirt on Hillary to render her candidacy stillborn. They’re also banking that the baggage that Clinton supposedly carries would render her an astonishingly divisive candidate. The checklist of the trumped up scandals of the past from Whitewater to the Monica Lewinsky scandal, her touting of health care reform, which was the prelude to the much harangued Affordable Care Act, and most importantly her alleged cover-up of Benghazi.

There was little doubt that the first chance the GOP got it would seize on a real or manufactured Obama foreign policy flub and make her their hard target. Benghazi proved to be the alleged flub and the GOP pounced. The Republican National Committee rammed the attack home with a half-minute clip of her Senate Foreign Relations Committee testimony last January on the Benghazi attack. The aim as always was to embarrass and discredit Clinton not because of her alleged missteps as Secretary of State, but as a 2016 presidential candidate.

In an earlier poll, there was some evidence that the stealth campaign to impugn her had gotten some traction. A Quinnipiac University poll last May found that Clinton’s favorability rating had dropped and that former Florida governor Jeb Bush and Kentucky Senator Rand Paul, both rumored as possible GOP presidential contenders, were actually within striking distance of Clinton in a head to head presidential match up.

Though the poll didn’t single out any one factor to explain the downtick in her favorability rating, the one intangible is the doubt many voters have that her past, her views, and her political style, would mark her as a relentless target for GOP attacks once in the White House, and thus hamstring her effectiveness in getting things done. If she faced a House still firmly controlled by the GOP, and even worse, a Senate with a GOP majority, it would be nothing but a virtual rerun of the rancor, in-fighting, and carping that has been the singular feature of the GOP’s non-stop, unbroken assault on Obama. In short, as President, Hillary, would not be able to get much done no matter her agenda with Congress, and the big loser would again be the country. The lines would be rigidly drawn. The brutal warfare between a Clinton White House and a GOP dominated Congress would quickly spill over into the public and the media.

They would spend endless hours debating and finger pointing either Clinton or Congress or both for the sorry state of affairs that again produced a politically fractured government. The GOP will also hammer hard on the Obama years and connect her with his administration. The issues such as the budget, spending, health care, regulatory reform, foreign policy issues that the GOP waged war against Obama on almost certainly will be the same issues that it will do battle with Clinton on. It will paint Clinton with its favorite brush as yet another big government, tax and spend Democrat who will further drive the country into debt.

Clinton, without doubt, is the one Democrat most feared by the GOP in 2016. And with good reason — if she runs, she can win. That’s why she is and will continue to be their perfect foil.

Earl Ofari Hutchinson is an author and political analyst. He is a frequent MSNBC contributor. He is an associate editor of New America Media. He is a weekly co-host of the Al Sharpton Show on American Urban Radio Network. He is the host of the weekly Hutchinson Report on KTYM 1460 AM Radio Los Angeles and KPFK-Radio and the Pacifica Network. His latest ebook ’47 Percent Negro’: A Chronicle of the Wackiest Racial Assaults on President Obama is now available (Amazon).

Why the GOP has declared open season on Michelle Obama