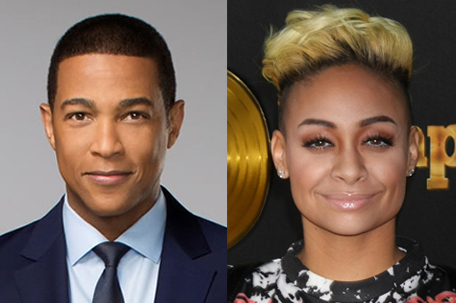 ABOVE PHOTO:  Don Lemon and Raven-Symoné

UPDATE 11/1/2015: On Saturday, an ABC spokesperson issued the following statement to The Hollywood Reporter, in response to the petition launched to remove Raven from “The View”: “We love Raven. She is confident, genuine and opinionated, all qualities that make her a great addition to the panel.”

Oh that Raven. Can’t live with her, can’t live without her. Every week she says something on “The View” that gets everyone talking, and up to her neck in trouble.

There are too many things that she has said on the show to even begin to list, but most recently, there was the whole “Watermelondrea” I-won’t-hire-black-people-with-ghetto-names thing. So dumb that even Ann Coulter, of all people, called her out on it, on the show recently, and shut her down.

Now there’s her seemingly confused and clueless support for that brutal beating of that female high school student by a cop in South Carolina. That was the straw that broke the camel’s aback, and, as a result people are campaigning for ABC to remove her from the show. An on-line petition calling for her removal from “The View” has been launched.

Well, sorry to tell you this, but Raven is not going anywhere. Why? Because of ratings of course. You may hate her, but she’s the smartest move that the producers on “The View” have made in a long time. As of last month, “The View,” according to TV by Numbers, posted its largest total in viewers and women 25-54 in over 8 months, beating CBS’ “The Talk,” which had been topping “The View” for almost a year. If I was one of the producers of “The View” I would re-up Raven for another year right now. Keep in mind that, as a producer, my No. 1 mission is to get ratings for the show. If I don’t, then I’m going to be out on the street, pounding the pavement.

And remember, we’re talking about television here folks, as in entertainment. As I wrote back in May, “The View” needed Raven-Symoné because she is controversial (or it could be some sort of bizarre art performance or experiment) which means she’ll bring in viewers. People naturally gravitate towards controversy. And believe me, the producers on the show knew exactly, in advance what they were getting with her. She’s no accident. They were not going to pick anyone who was safe and conventional. They intentionally wanted someone who would get people riled up.

As I said previously, for all the controversial things she’s been saying, people are definitely curious about Raven-Symoné, if only to see what kind of wacky shit she’s going to say next. One could argue that she is well aware of what she’s doing, and playing along in what is effectively the role of the “wild card.” Or, actually, it could be that this is who she really is, with no pretenses, take it or leave it.

The same goes for Don Lemon and CNN. Currently, there is another online petition to get CNN to get rid of Lemon, after his equally inflammatory comments about the high school incident. That is on top of all the other stuff he has said just over the past year alone.

The petition has already garnered some 32,000 signatures out of a projected 35,000 goal, but it won’t do any good. CNN, during the past year, has been doing very well in the ratings, coming in a strong second after Fox News, and beating MSNBC by a mile. CNN needs him because, like Raven, he too is controversial and brings in viewers – even those who despise him, but still tune in to see what is he going to say next.

Which means that networks are looking for people who are entertaining. I go back to Joy-Ann Reid on MSNBC. One of the savviest and sharpest political analysts on TV today, I long advocated for her to get her own show on the network. And she finally did. But it lasted only a few months. I even stopped watching it after a short while. Why? Mainly because she wasn’t “entertaining.” She’s great in small bites, where she appeared on other shows to give her opinions and analysis, but give her an hour, and it’s a challenge. She didn’t have that thing that the others have that made the masses say, “I have to watch her every day just to see what she’s going to say next.” People want conflict and fights. People like Bill O’Reilly does that all the time on his show on Fox, and his ratings are the proof. The lack of conflict by challenging people with different opinions is one of problems with Melissa Harris-Perry’s show, also on MSNBC. Too many guests who agree with the host. And in TV land, that’s typically dullsville.

But there is a another problem with all these petitions, and that’s basically, in reality, they’re just another form of censorship, which I abhor. O.K. Don’t like someone for their opinions, or what they say, then fine. Don’t watch them, and find something else to do instead. But you can’t force your will over others, to have something removed simply because you don’t like it. Free speech and all that, you know.

Second, as hard has it may be for some to understand, not all black people think alike. Not all black people are “conscious” and say all the “right” things you want them to say. You want to believe that we do, but we don’t. And you should well know that.

Many of us can’t stand Raven-Symone,  Don Lemon, or Ben Carson, and that’s fine. But,  who says that all black people must all agree and carry the same opinions? Don’t like Lemon? Then, don’t watch his show. Maybe if  enough viewers stop watching, CNN will get the idea and dump him. Don’t like Carson? Then for God’s sake, make sure that you don’t vote for him, and not only will he go away, it’ll also showthose clueless white conservatives who love to say that black people will vote for any candidate just because they’re black that they’re wrong.

Yes, signing petitions may make you feel good. But in  reality, they’re all just another example of “armchair activism” designed to make you feel better, and convince you that you’re making a real positive change, when in reality, it’s not going to do anything at all.