Why so many Americans still say no to Sanders’ socialism 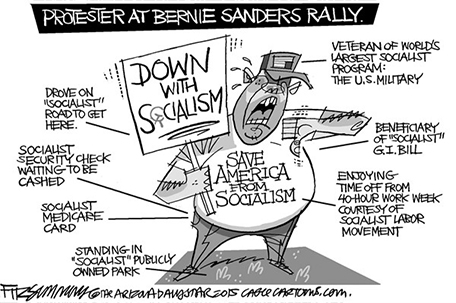 In January, 2010, two years into his White House tenure, President Barack Obama journeyed to a GOP confab in Baltimore. There was an issue that he wanted to confront head on. That was the at times open attacks and at other times snide innuendos that he was s socialist in disguise. He talked a lot about his signature health care reform bill as the prime case in point that the GOP ridiculed as a big step toward socialism. There was no evidence that Obama’s admonition to knock off the slander convinced very many there that Obama didn’t have a socialist agenda tucked away somewhere in his administration’s initiatives. In the years since, there hasn’t been a moment when Obama on the road didn’t see some sign by some protest group somewhere knocking him as a closet Red. There are millions of references, quotes, quips, comments, and notations on Google tarring Obama as a socialist. Obama has at times laughed the smear off, and at other times simply chalked it up as part of the GOP’s dirty war to taint, obstruct, and undermine his presidency.

The big question now that Bernie Sanders who is a real, unabashed socialist is contending for the Democratic presidential nomination is what has changed, and why socialism is still the old red herring for so many Americans who don’t wear the GOP party label? A Gallup poll last June listed every group–Catholics, Jews, Mormons, Muslims, Blacks, Hispanics, Gays, women, and even atheists—that has at one time or another been considered political pariahs. The very talk of a presidential candidate emerging from one of these groups was instantly laughed off as a pipe dream. That’s no longer true. In every case a majority of Americans said that a presidential candidate’s religion, gender, sexual preference, belief or non-belief, or race would not be an issue. There was one exception. The majority said they still wouldn’t vote for a socialist.

Now it’s true that polls show that younger Americans don’t have the hang up, fear, or loathing for a socialist and that more Americans are curious about just what a socialist is. This was evident in the immediate aftermath of the Democratic presidential candidate’s debate when Google got flooded with searches and questions about Sanders’ socialism.

But a Google query, a sea change in curiosity and damped down hostility from many Americans to socialism, is still a far cry from taking the socialist fear, wariness, and shun off the political table. ”Socialist” is a loaded term that has always touched a raw nerve with many Americans who have been in a fog on what socialism is and how it works as a system. The old Cold War image for decades of a socialist, drilled home images of Lenin and Joe Stalin, bloody dictators, gulags, and totalitarianism. This has been more than enough to put a deathly scare in most Americans. To many, a socialist is someone who is pro-union, pro-increased government spending on health and education programs, and pro-civil liberties and especially civil rights. This always drew fire from the right. During the 1960’s Dr. Martin Luther King, Jr. was routinely smeared as a communist and a socialist.

The mildest criticism of big business and the wealthy insures a slap on of the socialist tag. The American economic sacred cow is that laissez faire wealth is tantamount to a divine right of kings, and any attempt to touch it is economic heresy. Politicians have long known that it’s the kiss of death to be seen as an advocate for tax and income fairness. That invites being plastered with the socialist tag.

Any talk of putting more wealth into the hands of the non-wealthy in the way of tax cuts, a Social Security tax increase on upper income wage earners, capital gain increases, and closing tax shelter loopholes is plainly regarded as wealth redistribution downward. During the 2008 presidential campaign, GOP presidential contender John McCain grabbed at the formula that GOP contenders traditionally use and hit Obama with it. In 2012, GOP presidential contender Mitt Romney doubled down on pretty much the same theme when he fired up a coterie of his rich donors with the slur that Democrats get “47 percent” of the vote because they give away “free stuff,” meaning a slew of government entitlement and welfare giveaways. He didn’t need to utter the word socialist” to get his meaning across.

Hurling the damaging political label at Obama was always more than just a calculated political ploy to smear and taint him. It taps into the deeply held belief–and even fear–that Obama would actually mug the rich and by extension those who fantasize about being rich.

Obama had to waste a lot of time assuring the GOP and the public that nothing could be further from the truth. Sanders need not do that since he’s still just a candidate for his party’s nomination. Not one person has yet gone to the polls nationally to vote for president. The test for Sanders and socialism will come when they do.

The unthinkable: a Cain versus Obama match-up