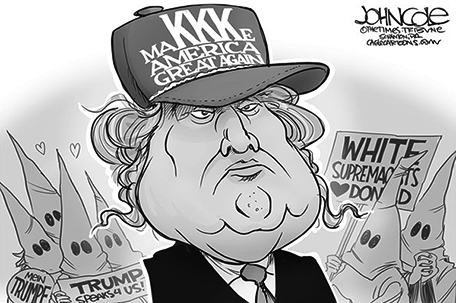 The latest fad in GOP circles is that when a Republican candidate, an elected official, or some GOP connected notable makes a racist crack, dig, or slur is to issue a pious, indignant statement denouncing the racist quip or act. The new GOP fad was on ample display when Trump refused to denounce former Klan Kleagle David Duke’s endorsement, nor any other support from the Klan. Yes, he stared down, a supporter wearing a Klan lettered tee shirt at a campaign rally, but that’s somehow not quite the same as a full throated tirade against the Klan. Trump won’t do that. But then again why should he? Fad, and hand wringing knocks against Trump for mute silence on the Klan from the GOP, won’t change the fact that Trump is simply taking his cue from his party.

On a cable talk show appearance in 2010, Senate Minority Leader Mitch McConnell flatly refused several direct, angled, and nuanced efforts to discuss racism in the Tea Party. McConnell’s none too subtle refusal to weigh in on the issue was in direct response to the NAACP’s resolution demanding that the Tea Party speak out, and speak out loudly against the racists among them.

Long before the NAACP stirred debate on Tea Party racism with its resolution, a legion of Democrats, civil rights leaders, and even an online petition from an advocacy group begged the GOP to speak out against its naked bigots.

There’s a good reason. The GOP would cut its throat if it denounced its racists and racism, and really meant it. The shouts, taunts, spitting, catcalls, President Barack Obama as Joker posters, n-word slurs, Confederate and Texas Lone Star flag waving by some Tea Party activists, and the deafening silence from GOP leaders during Obama’s early years in office, was and still very much is an indispensable political necessity for the party.

The spark to reignite the GOP’s traditional conservative, white male loyalists, and increasingly white female supporters, has always been there. The 2008 presidential election gave ample warning of that. While Obama made a major breakthrough in winning a significant percent of votes from white independents and young white voters, McCain (not Obama) won a slim majority of their vote in the final tally. Overall, Obama garnered slightly more than 40 percent of the white male vote. Among white male voters in the South and heartland, Obama made almost no impact. Overall, McCain garnered nearly 60 percent of the white vote.

The GOP could not have been competitive during the 2008 and 2012 campaign without the bailout from white male voters. Much has been made since then that they are a dwindling percent of the electorate, and that Hispanics, Asian, black, young, and women voters will permanently tip the balance of political power to the Democrats in coming national elections. Blue collar white voters have shrunk from more than half of the nation’s voters to less than 40 percent.

The assumption, based solely on this slide and the increased minority population numbers and regional demographic changes, is that the GOP’s white vote strategy is doomed to fail. This ignores three political facts. 1) Elections are usually won by candidates with a solid and impassioned core of bloc voters. 2) White males, particularly older white males, vote consistently and faithfully. And 3) they voted in a far greater percentage than Hispanics and blacks.

The GOP leaders have long known that blue collar and a significant percent of college educated, white male voters, who are professionals can be easily aroused to vote and shout loudly on the emotional wedge issues; abortion, family values, anti-gay marriage and tax cuts. They whipped up their hysteria and borderline racism against the Affordable Care Act, and by extension Obama. This was glaringly apparent in ferocity and bile spouted by the shock troops the GOP leaders in consort with the Tea Party activists brought out to harangue, harass and bully Democrat legislators on the eve of the health care vote. These are the very voters that GOP presidents and aspiring presidents, Nixon, Reagan, Bush Sr. and George W. Bush, McCain and Romney, and an endless line of GOP governors, senators and congresspersons have banked on for victory and to seize and maintain regional and national political dominance.

The GOP is widely seen, an insular party of Deep South and narrow Heartland, rural and, non-college educated blue-collar whites. But this is not a voting demographic to mock, ridicule or be sneered at, let alone dismiss, because the numbers are still huge.

The GOP driven by personal instinct, political leanings, its history, racial demographics, and raw political need, has masterfully played the race card for more than a half century to get its way. Trump studied the template well, and has managed to added a few tweaks to it, with his swagger and bluster. Asking him to stop now would be asking the GOP to cut its own throat. Trump well knows that.

Earl Ofari Hutchinson is an author and political analyst. His latest book is From Sanders to Trump: A Guide to the 2016 Presidential Primary Battles (Amazon Kindle) He is a frequent MSNBC contributor. He is an associate editor of New America Media. He is a weekly co-host of the Al Sharpton Show on Radio One. He is the host of the weekly Hutchinson Report on KPFK 90.7 FM Los Angeles and the Pacifica Network