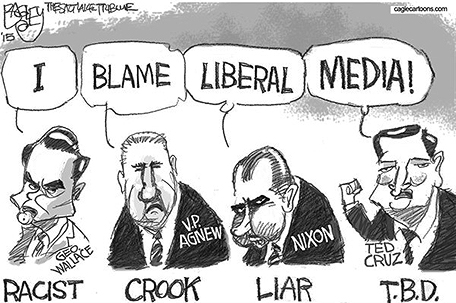 The latest polls in the GOP presidential candidate derby now have Texas Sen. Ted Cruz streaming past prior front-runner Donald Trump in the crucial first primary in Iowa in February.

The poll result tells much about why Cruz is far more dangerous than Trump. But there are so many more reasons than that. Cruz actually won a key elected office and has the experience in running a real campaign and building a political apparatus from the bottom to the top to stay in office. In the short time he’s been in the Senate, he’s done much more than hold the office.

He has managed to make a name for himself by being an effective obstructionist especially with his repeated saber rattle to shut down the government. In the process, he’s cowed GOP leadership into outright support of his wacky obstructionism. The party leadership may scoff at or even loath him, but they can’t deny him. He is not a party establishment pariah like Trump is. He has even managed to do a little party one-upmanship by seeming to be critical, even disparaging of Trump while being careful not to do or say anything that would alienate Trump’s disaffected, anti-party establishment, mostly white/blue-collar base.

And speaking of a base of support, Cruz has support that’s firm, committed, politically savvy, and potentially politically lethal. That’s the increasingly rock solid support of ideological ultra-conservatives, and evangelicals. Their numbers are big and they vote. The estimate is that white evangelical Protestants make up nearly one in four voters.

The problem for the GOP establishment is that these voters are totally alienated from it and stayed home in droves during the 2008 and 2012 presidential contests. GOP presidential contenders John McCain and Mitt Romney were simply too moderate, too compromised, and too much a part of the Washington elite to suit their tastes. Cruz is their dream come true in a candidate. He is a professed evangelical, ultra-conservative on all issues, takes an uncompromising small government, strict constructionist stance on the law and public policy questions. Most importantly, he is not afraid to talk tough and mean, and lash out at the Washington establishment when it suits his purpose.

Cruz can work both sides of the political street. He can play direct to the hard right’s agenda and at the same time burnish his Senate credentials to tout his political experience and give the appearance that he could actually get things done if elected. This would make him an almost irresistible force for GOP party leaders to resist endorsing and getting behind if he ultimately emerges as the one who stands the best chance of getting the nomination.

This would compel the Republican National Committee, the Koch Brothers, and the major GOP corporate funders and bundlers to open wide their purses and the party’s massive campaign propaganda machine to Cruz. This combined with the mountains of small and mid-size donations that would flood his campaign from energized ultra-conservative and evangelical grass roots voters would put him in a commanding financial position. He would have the resources and political backing from both the top and bottom of the GOP electorate to give the likely Democratic presidential nominee Hillary Clinton a real run for the White House.

Cruz’s shoot from the lip style, while seemingly speaking with authority, would make him a formidable foe when it comes to the rough and tumble of trading barbs and slings with Clinton. He would not hesitate to relentlessly pick and probe at and pound on her perceived political weaknesses. That is Clinton’s supposedly untrustworthiness, and long ties to the Washington establishment to stir, enrage, and whip up even greater loathing against her, the Washington bureaucracy, and the Democrats.

This alone would translate out to untold numbers of more votes for Cruz; votes that almost certainly would not have gone to either Trump or a mainstream GOP presidential nominee. This increased backing could perilously morph into a horserace with Clinton in the must-win swing electoral states of Wisconsin, Pennsylvania, Virginia, Colorado, Illinois, and especially Ohio. Cruz going in to the general election would have a huge electoral anchor in the Deep South, Texas and Oklahoma, the Border States, and the Heartland states. This would not be enough to tip the electoral scales to him. But with potential wins in any of the swing states it would make the race a real nightmare for Democrats.

The Democrats bank on the GOP imploding with Trump and the supposedly massive turnout of youth, blacks, Hispanics, LGBT, labor, and moderate mid-income white women to more than offset any numbers the GOP could muster. This is a big mistake. These voters did come out in near record numbers for Obama in 2008 and to a lesser extent in 2012. However, Clinton is not Obama. That’s to say she’s not a racial history making candidate. His election and reelection was a deeply personal, heartfelt game changing victory for millions. The jury is way out on whether that same deep passion and motivation will be there for Clinton.

Meanwhile Cruz bides his time waiting for a Trump implosion, all the while with his base and party credentials firmly in hand. This makes him far more dangerous than Trump.

Earl Ofari Hutchinson is an author and political analyst. His latest book is Trump and the GOP: Race Baiting to the White House (Amazon Kindle). He is a frequent MSNBC contributor. He is an associate editor of New America Media. He is a weekly co-host of the Al Sharpton Show on Radio One. He is the host of the weekly Hutchinson Report on KPFK 90.7 FM Los Angeles and the Pacifica Network