When The Youngsters Say ‘Enough!’ 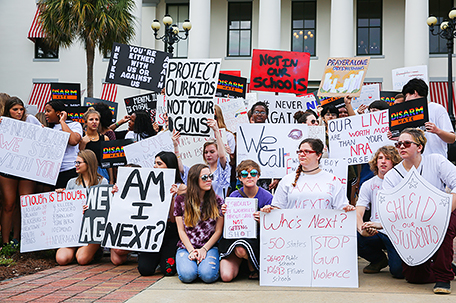 On Saturday, March 24, young people will take to the streets around the world to protest gun violence and to demand common sense gun control instead of doing the kinds of things kids usually do on weekends. That they felt they had to do it should anger all of us.

Believe it or not, that’s a topic on Google right now. That’s because a 17-year-old boy walked into Great Mills High School in Maryland, shot two of his classmates, and got into a gun battle with a police officer. He was ultimately killed.

As winter turns to spring, the phrase “school shooting” has shown up a lot in the copy I edit here at the SUN. On Valentine’s Day, 17 children were killed when Nikolas Cruz walked into Marjory Stoneman Douglas High School in Parkland, Florida with an AR-15 assault rifle and started shooting up his classmates. He’s currently in jail, possibly facing the death penalty.

There have been at least 14 school shootings in 2018, continuing a really frightening trend that started back in 1999 with the Columbine High School massacre.

The Sandy Hook massacre showed us that not even elementary schools are safe…something that’s spawning a new industry in such things as bulletproof lunch boxes and baby vests.

But what it hasn’t spawned is the kind of legislation that would being some sense to the nation’s gun laws, or at the very least would keep AR-15s out of the hands of people who shouldn’t have them, which is to say, EVERYBODY.

Because of this, the students who survived the Parkland shooting organized the March For Our Lives. The idea behind this is to remind our Republican-controlled Congress that while the National Rifle Association may be paying for your campaign commercials, We The People pay for that Cadillac health care and the salary you enjoy. Because of this, you might want to be more responsible to us.

If you want to participate, there’s going to be a march here in Philadelphia. Marchers are asked to meet on Independence Mall at 5th and Market at 9:30am. The march starts at 10am.

On the one hand, I’m really proud of the kids organizing this. I’m proud that they’ve taken this initiative. I’m proud that they’ve decided that they’re going to try and make the change they want to see in the world. I’m proud of how they’ve conducted themselves despite the slings and arrows that folks like NRA spokesperson (and I use the term “person” loosely) Dana Loesch and the Second Amendment Get Fresh Crew have thrown at them.

But what’s kind of annoying me is that they’ve had to. Kids shouldn’t have to fight for their lives when there are perfectly good and able adults around to do that for them.

Adults have sat back and watched as incidents like Columbine, Sandy Hook, Marjory Stoneman Douglas, and a whole host of other unnecessary shootings in schools, shopping malls, movie theaters, and a lot of other places where you should be able to feel safe, learn stuff or have fun have taken place and instead of saying “We call BS!” and going to our state and federal legislatures to demand they do something, we’ve done nothing.

We haven’t demanded better funding for education, something that might bring down the rate of gun violence in our nation’s cities.

We haven’t demanded that our elected officials stop using incidents like this as a means to shame those with mental health issues.

We haven’t done anything.

So now the kids have got to do the lifting for us.

And we should be ashamed of ourselves for that.

One of the things that the organizers for the March For Our Lives have incorporated into this march is voter registration. They want to make sure that all of the people who care more about their NRA money than they do their constituents have to find new jobs come November.

Seeing that voting isn’t something we adults have been doing much of either, I hope this works.

Those who do nothing on gun control fail our children