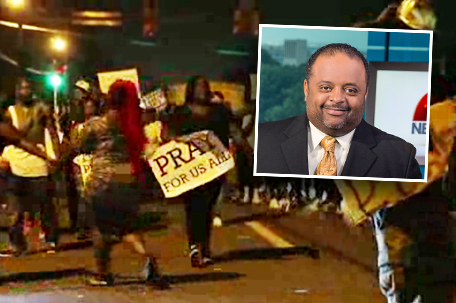 Because Americans are willing to cede their power to police, getting indictments when that power is abused is a challenge, according to Roland Martin.

It is easier for a camel to pass through the eye of a needle than it is to get a police officer charged with shooting someone unnecessarily in the line of duty.

In St. Louis County, Missouri, the county in which Ferguson Police Officer Darren Wilson shot Michael Brown to death, there have been 14 officer involved shootings between 2004 and 2014, according to David Klinger, a criminologist at the University of Missouri-St. Louis.

But while statistics show that if a prosecutor wants to, he or she can get a Grand Jury to indict a ham sandwich for anything, what the lack of an indictment in the Wilson case should show us is that it’s equally easy for a prosecutor to fail to obtain an indictment if that’s his goal, said Roland Martin, host of TVOne’s NewsOne Now.

In a conversation with the SUN, Martin talks about why no one should be surprised that St. Louis County District Attorney Robert McCullough didn’t get am indictment from the Grand Jury, what options are still available to Michael Brown’s family, and what McCullough’s willingness to blame the media should have told you about how this case was handled.

SUN: Good afternoon Roland and thank you for your time. You’ve been following the Michael Brown case for a while. Were you surprised that there was no indictment?

RM: I wasn’t surprised because I didn’t think he’d indict. Very few police officers get indicted for these kinds of shootings. Even if the police chief feels that the shooting is unjustified, it’s hard to get an indictment. In the case of Jonathan Ferrell in Charlotte, the first Grand Jury didn’t issue and indictment and the second finally issued an indictment for manslaughter. If there would have been an indictment, I would have been shocked.

SUN: I think that a lot of people feel the way you do, that an indictment would have been a surprise. Why is that?

RM: I think that it’s because in this country, police officers are given the benefit of the doubt when they shoot someone. For example, in the John Crawford case in Ohio [A case in which a man was shot in Wal-Mart holding a BB gun he was about to purchase], the police came in armed, saw him at the end of the aisle in the Wal-Mart supermarket, and shot first. The police officers were cleared.

Time and time again, we leave the discretion to police departments when it comes to the use of deadly force. We yield so much of our power to the police and allow them to do whatever it is they want to do.

SUN: After the Grand Jury decision was announced President Barack Obama spoke to the nation. He said that the shame of the Ferguson situation was that it made the very people who need good policing, people in high crime areas, believe they can’t trust the police. What do you think can be done to combat that?

RM: The police need to own up to the part they’ve played in fostering this mistrust because it’s been earned. If you don’t see any justice in police brutality cases, there’s no adjudication in cases like [the Brown case], and you’re being racially profiled, that’s a problem.

SUN: One of the things that I found most interesting about DA McCullough’s press conference was the emphasis he placed on social media and the 24-hour news cycle. It was as if he blamed the media for his inability to obtain an indictment. What did you think about that?

RM: That was utterly shameful! That was just his trying to cast blame and it was pathetic. He should have been ashamed of himself. It reminded me of a Chris Rock joke. The prosecutor was a joke.

SUN: There are a lot of people who question just how strenuously DA McCullough actually tried to get an indictment in this case. What are your thoughts on that?

RM: On the federal level, there are 163,000 cases that come before a Grand Jury a year. Out of that, only 11 failed to end in an indictment. It’s very, very rare that a prosecutor doesn’t get an indictment in a case and I think that it’s because he didn’t really seek one. You’re going to give everything to the Grand Jury, including statements floating around on the Internet that were unsubstantiated? Why would you give them unsubstantiated information? That to me shows how thoroughly McCullough didn’t want to prosecute this case.

SUN: What’s next for Michael Brown’s family from a legal standpoint? I know that the federal Department of justice is still investigating, but what can be done from a justice standpoint for this family?

RM: There are two areas where the family could get justice. One is a potential federal trial. The other is a civil trial. A civil trial has a lower threshold of proof and if they sue Darren Wilson, he’ll have to testify.

SUN: Thank you so much for your time and we’ll follow this story with you on NewsOne Now.