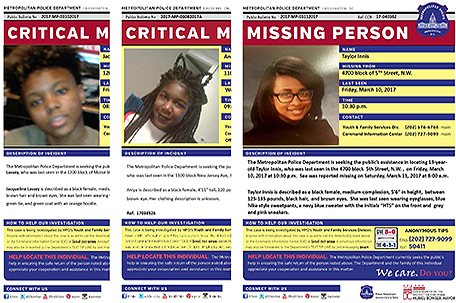 The media,Washington, D.C. police, and city officials were hammered for allegedly ignoring the plight of more than a dozen missing Black and Latina girls in the city.

Community activists chalked the seeming indifference up to racism. The outcry triggered a spate of news stories on the missing girls, angry denials from the police that they were asleep on the job in trying to find them, and lots of stats that purported to show that there’s been no major uptick in the number of missing persons in the District, and certainly nothing that points to any conspiracy to nab, traffic in, or murder young Black females. The push back against the charges of murder and conspiracy is almost certainly right. However, it doesn’t answer the perennial question about how black female lives in distress are viewed and treated versus the lives of white females in similar circumstances.

The gaping disparity in the number of Black kids missing, and how their disappearances are treated, is glaring. According to FBI figures, African-American children make up 42 percent of non-family abductions. Yet, one would be hard pressed to find Amber alert tweets and their pictures plastered on freeway alert signs.

The media is no better. A 2010 Pace University study compared reporting by race and gender on several major news stations between 2005 and 2007. Predictably, it found that Black kids were almost invisible in news coverage.

The issue of which victims get covered and which are ignored exploded as a major racial crisis issue when several cities were hit with a wave of serial murders of Black women during the 1980s. The complaint was that the murders went on with no public warning, media coverage, and seemingly scant police action for years. Police and prosecutors bristled each time they were charged with being less diligent when it comes to nailing serial killers who kill Blacks. In Los Angeles — which had a serial killer roaming on the loose in the 1980s, killing scores of mostly poor Black women — officials pleaded that they were under staffed, lacked the resources, and technology to make a swift arrest when the killings began. There was some truth to that then. But since then there’s been a tremendous advance in the use of computer matches, and forensic and DNA testing. This has helped police quickly zero in on likely suspects. In Los Angeles, police officials went further and setup special task forces to track down the killer.

But that still begs the question that lurks underneath the case of D.C.’s missing girls. That is that far too often police and city officials do not see victims in inner city neighborhoods as the type of women who reflexively ignite police and public outrage. There are reasons — troubling reasons — for this.

The long running serial killing saga underscores the great threat of murder and criminal violence to many Black women. Homicide ranks as a major cause of death for young Black females. A Black woman is more likely to be raped and assaulted than a White woman. While the media at times magnifies, and sensationalizes crimes by Black men against White women, it ignores or downplays crimes against Black women.

Then there’s the drug menace. Nearly half of the women behind bars in America are there for drug-related offenses and the majority of those women are Black. Some of the suspected serial murder victims, and in some instances in the case of D.C.s missing girls, had a rap sheet for drug use, trafficking, or simply hailed from troubled homes. This was repeatedly mentioned in press accounts of the victims. They easily fit the popular public and media profile of the drugged-out, derelict Black woman.

There’s also the notion that these women are dangerous women. The police slayings of Black women in some cities, the upswing in violent crimes by women, and Hollywood films that show Black women as swaggering, trash talking, gun-toting, and vengeful stoke public jitters about these women. One in four women is now imprisoned for violent crimes, and half of them are Black. Black girls are hardly exempt from this negative image and typecasting.

Studies by the American Bar Association have found that teen girls account for more than one-quarter of the juvenile arrests, are committing more violent crimes, and are slapped back into detention centers after release faster than boys. Black girls were arrested and jailed in far greater numbers than White girls.

The proactive steps taken by D.C. police, city officials, and the Congressional Black Caucus, which has called for federal intervention in the hunt for the missing girls are welcome and much needed. It has certainly made the public much more aware of the peril that many Black girls and women face on the streets; and part of that peril is the possibility of being the victim of violence.

Unfortunately, it took an outcry and an ugly and embarrassing media spotlight on the missing girls to make their disappearance a national issue. Now, the task is to make sure that public concern about what happens with their lives stays a national issue.

Earl Ofari Hutchinson is an author and political analyst. He is the author of In ‘Scalia’s Shadow: The Trump Supreme Court’ ( Amazon Kindle). He is an associate editor of New America Media. He is a weekly co-host of the Al Sharpton Show on Radio One. He is the host of the weekly Hutchinson Report on KPFK 90.7 FM Los Angeles and the Pacifica Network.