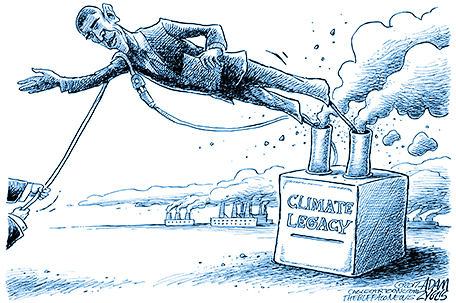 Trump will stop at nothing to try and destroy Obama’s programs, legacy and ultimately place in history. This is a fixation for which there is no cure.

The clinicians would have a field day with President Donald Trump’s fixation with former President Barack Obama. He hasn’t missed a chance to hector, accuse, bait, and hack up the former President at every turn. There were times during the 2016 presidential campaign that Trump seemed to be running against Obama, rather than Democratic nominee Hillary Clinton. He never missed a chance on the campaign trail to denigrate him.

By then, Trump had perfected his beat down of Obama to an art. The beat down made him a near household name, and got his name out there as a potential GOP presidential candidate in 2012, when he went on a public rampage against Obama’s alleged alien birth. He didn’t run that year. However, Obama was never far from his mind. Every chance he got he’d bring up the phony, fraudulent birther claim, his alleged excessive vacations, and incessantly nit-pick at one or another of Obama’s policy initiatives.

On the 2016 presidential campaign trail, Obama was constantly on his lips. At a GOP presidential candidate’s forum in early 2015, then – presidential candidate Trump, without a blink said, “I don’t know if he loves America.” The “he” Trump referred to was, of course, Obama. Even after he won the White House, he couldn’t shake his clinical fixation with Obama. He tossed out the ridiculous, and outrageous charge that Obama wiretapped him during the campaign, and demanded that Congress investigate him.

It is tempting to chalk Trump’s Obama fixation up to yet another Trump scheme to deflect attention from his miserable tenure in the White House. In part, it is. However, there is method to the madness about Trump’s persistent use of Obama as his foil. It isn’t just to slander his presidency. It’s to slander him. It isn’t just political, it is personal. The two can’t be separated. Trump repeatedly made clear during the early stages of his campaign that if he got in the White House he’d sign any and every executive order he could to try and halt, gut, or obliterate every initiative that Obama had ever put in place.

Trump’s verbal assault on all of Obama’s initiatives normally would have been the end of it. Presidents from an opposing party, to varying degrees, quickly sign executive orders to roll back some of their predecessor’s initiatives and actions when they take office. However, Trump’s obsessive attacks on Obama had another aim beyond mere personal vindictiveness and deflecting attention from his disastrous administration. It sent the strong signal to his base that he would try and demolish everything that they loathed about Obama; not just his policies, but what he personally stood for.

Obama was an eight-year embarrassment to the chronic Obama haters. He was liberal. He was a Democrat. And most odious to them, he was Black. Tea Party demonstrators greeted Obama at many stops during his first two years in office with placards, signs and pictures that depicted him in the most-lewd, grotesque and often animal-like characterizations. This went way beyond the bounds of normal political attacks and criticism of a president. It was blatantly personal, and showed the depth of the personal distaste many had for Obama, and they were not shy about showing it. Trump at points during his campaign, made no effort to correct or reprimand anyone at his townhalls and rallies who got up and vilified Obama in personal terms. This reinforced the point that Trump would make again and again that Obama was not fit from a political or personal standpoint to occupy the White House.

Even Trump’s very belated acknowledgement in the latter stage of his campaign that Obama was an American citizen was said matter of fact. There was absolutely no elaboration, let alone showing any sign of contrition for waging his ruthless and prolonged campaign to slur him as an alien.

Now that Obama is out of office, Trump’s frontal attack on his executive orders is much more than an angry and indignant party going after executive orders it doesn’t like, or to restore what it considers its proper congressional lawmaking authority. It is revenge, pure and simple, against a former president’s legacy. Much of that legacy is intertwined with his willingness to use the power of his office whenever and wherever he thought he could to frontally challenge the GOP to cease its relentless, dogged, and destructive campaign of dither, delay, denial, and obstructionism to anything that had the White House stamp on it.

This is anathema to Trump and the GOP. Trump is determined to wipe the slate completely clean of the acts of a former president who, in part remains popular. However, in greater part it is because Obama is still seen by many Americans as what an accomplished, thoughtful, policy driven president should be. This is what Trump cannot abide. He will stop at nothing to try and destroy Obama’s programs, legacy, and ultimately place in history. This is a fixation for which there is no cure.