What About Your Friends? 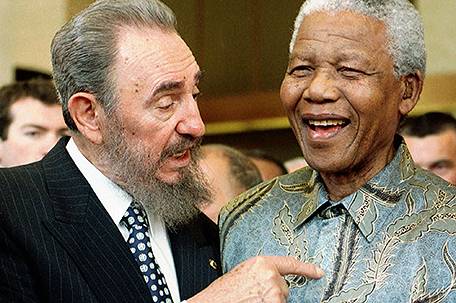 ABOVE PHOTO: Cuban leader Fidel Castro, left, shares a laugh with South Africa President Nelson Mandela in 1998 at a meeting of the World Trade Organization in Geneva, Switzerland.  I kind of wondered what would keep a 90-year-old man in failing health on a terrorist watch list.

There’s a saying: The Enemy of My Enemy Is My Friend.

That saying has played a pretty large part in the foreign policy of the United States since, well, forever.  It’s expected that if you’re going to be a friend of ours, you also have to be an enemy to our enemies. For example, if you want to be cool with the folks who run things here in the United States, it’s okay for you to swear allegiance to Israel, which is one of our friends, but you can’t hang out with, say, the leader of the Taliban.

Failure to understand and observe this dynamic can lead to your getting the  side eye from certain leaders here in the United States. It can get you branded as someone who, in the words of our favorite Sage From The Yukon, former Alaska Gov. Sarah Palin, pals around with terrorists.

There are a whole lot of examples of this in American History…the latest being the man pictured above, former South African President Nelson Mandela. When the anti-apartheid activist died last Thursday, we learned a lot about him. We learned about how he passed the time in the 27 years he was imprisoned on Robben Island. We learned about how he ended up in Johannesburg (His parents had arranged a marriage for him). We learned about the trials and tribulations that Winnie Mandela, his wife at the time, had to endure because of the iconic status he had obtained as a freedom fighter among Black South Africans.

But the most interesting thing that we learned about Mandela, or Madiba as he was known among the Xhosa, is that despite a couple of visits to the United States in the 1990s, a lack of any violent activity since his release from prison, and the fact that he was an aging statesman in poor health, he was on the U.S. Terrorist Watchlist until 2008.

Now what would keep a 90-year-old Nobel Peace Prize winner in failing health on a list that included Osama Bin Laden, a dude that masterminded the biggest terrorist attack in our nation’s history?

The fact that Mandela didn’t follow the whole “The enemy of my enemy is my friend” thing.

Now in the 1980s, when American news organizations knew that it might be a good idea to know what’s going on in the rest of the world because it could impact us, we all learned about the struggle against apartheid in South Africa. The nation’s Black majority was being ruled by a White minority that can be charitably described as cruel. Blacks lived in shanty towns called homelands. They were forced to carry passport-looking ID cards to show they were in the right place and punishment was pretty swift if they either didn’t have the card or were in the wrong place.

Police brutality took on a whole new meaning there as activists like Steven Biko were killed in prison. The African National Congress, the political party to which Mandela belonged, was outlawed. Blacks themselves had no right to vote.

Because even Stevie Wonder could see that this whole arrangement was Straight. Up. Wrong., Mandela and the African National Congress fought to try and change things. They got arrested and tried for their efforts. Mandela spent 27 years in prison, most of them on Robben Island working in a quarry. He could only see his wife Winnie twice a year…

While he may have been in jail, Mandela’s message managed to get out into the world. A lot of us participated in sit-ins at our colleges and universities demanding that our tuition dollars not be used to finance anything in South Africa until apartheid was no more. We joined organizations like Amnesty International and wrote letters demanding Mandela’s release. There were calls for businesses in the United States to divest from South Africa as well.

Meanwhile, President Ronald Reagan, like many of the leaders in the West, opted to go with a solution that was designed to silence the protestors without damaging any business relationships in South Africa.

There’s another saying, and I’m going to paraphrase here: If someone shows you who they are, believe them. While that goes for people, that goes double for governments. When a government pretty much lets you know that if you give it money through investment, that money will be taken to oppress the majority of its people, you should believe them…and keep your money, money raised through taxation, in your pocket.

But because South Africa had the right enemies, namely the Communist Bloc, Ronnie Raygun (thank you Gil-Scott Heron!) and his friends were willing to give the Apartheid Government money. Too bad for him that Congress had other ideas…veto-proof ones.

But the enemies of the Reagan Administration’s enemies became Nelson Mandela and the African National Congress’s friends. Folks like Fidel Castro, Muammar Gaddafi and others who were definitely enemies of the United States helped when the West wouldn’t.

Although Mandela found Communism as a philosophy lacking, all that you need to be considered a Communist to many on the Right is to have taken a picture with one.  You see, to most of these folks, the African National Congress should have just kept their mouths shut and waited for the West to finally decide to help. The thought was, “We see that you’re being oppressed, and we get that you’re mad. But Communism is bad, so take one for the team…”

But while that was the prevaling thought on the Right, it wasn’t a universal one. In what can only be described as a shocker, I find that I have something with which I can agree with, gasp, former Speaker of the House, Republican Presidential Candidate, and Tiffany’s Frequent Shopper Card Owner Newt Gingrich when he took on Mandela’s critics by asking “What choice did he have?”

As I mentioned earlier, Congress voted to hit South African with economic sanctions, which stuck despite the veto of Ronnie Raygun.

Most of the Senators voted to override the veto, but a small group voted to keep financing the Apartheid government. In fact, one of them spoke out this week and said that he didn’t regret his vote to maintain the veto.

That senator? Well, it should be no surprise to anyone that it’s former Vice President Dick Chaney. I can only imagine what’s going to come out of his piehole when someone mentions to him that President Barack Obama shook hands with Raul Castro, president of Cuba and brother of Fidel, at Mandela’s memorial service on Tuesday.

(Editor’s Note: For those of you who are disgusted by the fact that President Obama shook hands with President Castro, I ask, what did you want him to do, deck him? …)

It should also be no surprise that once folks discovered Mandela on that watch list, they cajoled President George W. Bush’s administration to take him off…despite the objections of his VP.

While I can understand the impulse of some to say that Mandela deserved to be on the watch list because of the friends he chose, I submit that the Cold Warriors making these criticisms need to shut their hypocritical pie holes.

America doesn’t mind tin horn dictators as long as they’re OUR tin horn dictators. Don’t believe me? Two words: Anastacio Somoza. Want three more? Jean-Claude Duvalier. The list of people we’ve paid to subjugate their people in the name of American interests in the Western Hemisphere alone is extensive and makes any so-called “moral” authority we have non-existent. I mean hell, my Dad fought in Vietnam. We’re not even going to go there…

Nelson Mandela, his willingness to forgive, and how that forgiveness helped South Africa move forward was brought up a lot this week.

That he extended this forgiveness to an allegedly democratic West that wouldn’t befriend his country until it had to makes Nelson Mandela a better person that I would be under the circumstances.

I guess that’s why he’s an icon…