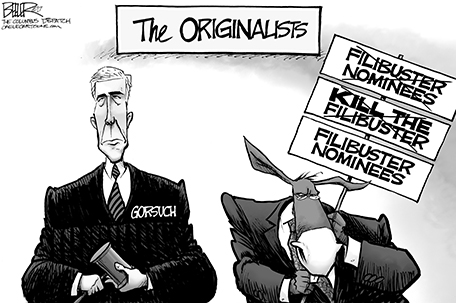 According to a coalition of community groups, Pennsylvania doesn’t have a friend in Supreme Court nominee Judge Neil Gorsuch.

When President Donald Trump announced that he had chosen Judge Neil Gorsuch to be his nominee for the Supreme Court seat that’s sat vacant since the death of Justice Antonin Scalia, advocacy groups decided to take a long, hard look at the nominee.

At a news conference on Monday in Philadelphia’s City Hall, representatives of many of these advocacy groups got together to let Trump — and by extension Pennsylvania Sens. Pat Toomey and Bob Casey — know that not only were they not pleased with the selection, but that they should all expect representatives of these groups to pay them a visit and soon.

Organized by Why Courts Matter-PA, groups including Planned Parenthood, POWER (Philadelphians Organized to Witness, Empower and Rebuild), Cease Fire-PA, the Conservation Voters of Pennsylvania and Equality PA, elaborated on their concerns.

Because some of the actions that the Trump Administration has taken in it’s early days have given many cause for concern, having a judiciary that won’t rubberstamp anything the President does is important, said Jeff Garis, Outreach and Engagement Director of Why Courts Matter-PA.

If Judge Gorsuch’s record is any indication, there’s no reason to believe that he’ll stand up to the President’s more unconstitutional impulses, Garis said.

“There’s already an exceedingly high bar for any nominee to the U.S. Supreme Court,” he said. “But Donald Trump’s executive actions that discriminate against Muslim Americans and his subsequent attacks on a federal judge raise the bar even higher. Judge Gorsuch, though, doesn’t come anywhere near that bar.”

For example, Garis said, Judge Gorsuch’s decision making shows too much of a willingness to give corporations the benefit of the doubt.

“His record shows a significant history of putting corporations over people, making it harder for us to hold Wall Street accountable,” Garis said. “And he’s not the independent, open-minded Justice that the Court requires now more than ever.”

The perception of a lack of open-minded independence on Judge Gorsuch’s part came up numerous times during the press conference, which was held in City Council’s caucus room.

Many of the reservations expressed by the coalition of organizations were connected to things that Philadelphians view as problematic. For example, in a city where gun violence is an issue, keeping guns out of the hands of felons is of paramount importance.

That seems to be a blind spot with Judge Gorsuch, said Dave Scholnick, a Cease Fire-Pennsylvania board member.

“As our elected leaders review Judge Gorsuch’s qualifications, they have to carefully consider his apparent reluctance to keep guns out of the hands of felons,” he said. “We all agree with current law prohibiting those convicted of felonies from possessing guns, so it’s important to question anyone whose judgements have veered so far from the mainstream. Letting felons possess guns with impunity undermines law enforcement and endangers our communities.”

In a city where poverty is an overriding issue, having a Justice on the Supreme Court who doesn’t see the issues of the poor as important can be problematic, said the Rev. Greg Holston, executive director of POWER.

Members of the Why Courts Matter-PA coalition plan on going to Washington, D.C. to let their feelings be known regarding the appointment.