We can no longer remain silent – terror is terror 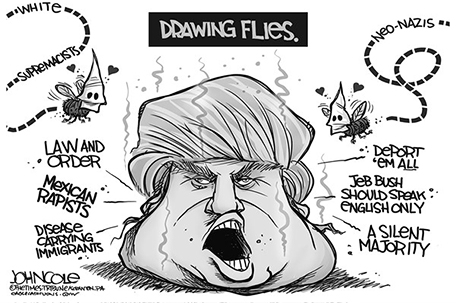 For evil to triumph, good people must remain silent. This is what happened during the escalation of the Vietnam War, the Jewish Holocaust and the Black Holocaust (the chattel enslavement of our people for nearly 350 years).  This history [of the Black Holocaust] is so brutal and morbid that all of America has tried to cover it up and remove it from history books.

A person can do three things when they see evil:

1) They can hate [evil] in their hearts: This is the least they can do. By hating evil in your heart you have the conditions needed to make change. While you are unable to do anything more about it, you at least recognize it as wrong.

2) You can speak out against evil which requires a higher level of action:  Speaking out against evil will sometimes place you against people that you love and care about.  It also puts you at odds with the power structure if that evil act is supported by them. It’s a risk to speak and a price to pay.

3) You change it [evil] with your hands:  This is the highest level of commitment.  Not only are you speaking out against the evil that you see, you are using yourself, your resources (i.e. financial, time, intellect, etc.) to fight.

Evil can’t triumph if “good” people let their voices be heard.  Yes, we have laws, but we also have a higher law and power. Most God-fearing people ascribe to “you reap what you sow.” Another term used to describe this is karma. I’ve always said that the majority of the people are good but are unfortunately part of the “silent” majority.

The silent majority is an unspecified large group of people who do not express their opinions publicly.

During the escalation of the Vietnam War, I will always remember what happened to those who opposed it. Some of our greatest leaders spoke against the war including Dr. Martin Luther King Jr. and [boxer] Muhammad Ali.  Dr. King paid with his life and Muhammad Ali was stripped of his title. Both were defined as “traitors.”

In 1967, three years after winning the heavyweight title, Ali refused induction into the U.S. military, citing his religious beliefs and opposition to American involvement in the Vietnam War. He was tried and found guilty on draft evasion and stripped of his boxing title. He did not fight again for nearly four years—losing a time of peak performance in an athlete’s career. Ali’s appeal worked its way up to the U.S. Supreme Court, where in 1971 his conviction was overturned.

The irony and karma is that Muhammad Ali is highly regarded, not only for his skills in the ring, but his fight for religious freedom, racial justice and his stand on the Vietnam War.

It’s very interesting to see [presidential candidate] Donald Trump spew bigotry and hatred singling out the religion of Islam. Am I forgetting something here? What would Native Americans say about terrorism?  What does the Black man in America say about terrorism?  Donald Trump released a statement calling for “a total and complete shutdown” of Muslims immigrating into the United States in light of recent terrorist attacks.

[Trump stated] “Until we are able to determine and understand this problem and the dangerous threat it poses, our country cannot be the victims of horrendous attacks by people that believe only in Jihad, and have no sense of reason or respect for human life.”

If I win the election for President, we are going to make America great again,” [Trump continued.]

This mentality is not new.  We’ve been accustom to this language and hate as Black people in America – applying and connecting it to Islam is just another form. The association of terrorism with Islam is an old dirty trick to glorify White supremacy and the religion of Christianity.

Trump represents the absolute description of “White Privilege” – only a White man could get away with this type of extreme rhetoric. He continues to rise in the polls. What does this say about America and our dirty little secret?  His base are right-wing, evangelistic Christians that romanticize about “going back to the good old days.”

“Going back to the good old days,” “make America great again” and “take back our country” are code words for White supremacy—get the first “N” out of the White House and signifies a time when the law of the land allowed White men to openly display their supremacy and discriminate.  For Black people this represented terrorism. Trump’s lead in the republican polls show that America has a significant number of racists who feel like him and wants to see White people and their White God (Christianity) in full power and dominance.

According to The Telegraph, David Duke, former imperial wizard of the Ku Klu Klan, was among a procession of White supremacists, who came to Trump’s defense.  On his radio show, Duke said Trump’s comments could undermine an American foreign policy that was under the sway of Zionism and supporters of Israel.

“The Jewish knives are coming out on Donald Trump,” he said.

White America does not have the moral right to spew such nonsense.

Did Donald Trump and White America forget about the Black Holocaust and the absolute terror that was heaped on our community? I would love to hear any White person call those Christians terrorists.

This is why we must do what White American Christians do on a regular basis and that is to disconnect religion from acts of terror.

Many Whites believe in [their] supremacy and the inferiority of Black people.  In my opinion, the term “liberal” represents White people who profess their love for Black people [but] are still unwilling to support Black people’s independence – I call them “liberal colonists.” I will elaborate more on this subject in another article.

I liken the current benefits of slavery (White privilege) to the person who is criminally charged in a theft even though they didn’t do the actual stealing.  What they did was receive and currently use the stolen property and therefore they are “conspirators” in the crime. Their actions have significantly contributed to the massive level of poverty that engulfs the majority of the Black community.  Nearly 50 years after the Civil Rights legislation, the economic conditions and structural poverty threaten every aspect of life that will continue to untold Black generations.  Dr. Martin Luther King, Jr. once stated that the worst form of terrorism is poverty. Like wealth, poverty is inherited. Black people have never had the opportunity to inherit or create wealth because they were enslaved and their labor was never compensated.

We must not remain silent about the bigoted statements and media description of terrorists.  If Americans want to connect the religion of Islam with acts of terror, then I say that’s hypocritical because we can make the same argument for what “so-called” Christians have done. We need to expand the concept of terrorism and terrorist.

Terrorism is terrorism. We can no longer be a member of the silent majority.