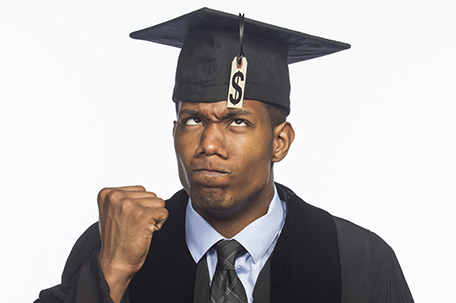 The reaction — shock, joy, disbelief, euphoria — revealed the importance of Robert F. Smith’s stunning gift, when he announced, unexpectedly, that he would pay off all the college debts of Morehouse College students graduating this year. His gift literally changed the prospects and the lives of the vast majority of those 396 graduates.

Full-time tuition at Morehouse is $25,368 per year; with room and board and other expenses, those costs can reach nearly $50,000. Ninety percent of Morehouse students get some kind of financial aid, cobbling together Pell grants, federal and private loans, family loans and more. Morehouse seniors who borrow to pay for college carry an average of $26,000 in federal student loans. Private loans, federal Parent Plus loans, credit card and other debts are on top of that.

The federal student loans alone would result in a monthly payment of $276. Robert F Smith’s generosity has literally transformed the lives of those students. Now instead of putting off graduate school or being forced to live at home, and later postponing marriage and children, they are free to benefit from the hard work they have done to graduate from college. They can seek jobs that they want, without being forced to take one or more that can help them pay down their loans. They are free to dream. Many of those benefiting from Smith’s remarkable generosity expressed what one student, Myles Washington, called a “level of survivor’s guilt.”

All had friends who could not afford to go to college, or who were forced to withdraw early in the face of growing debts. Robert F. Smith is a billionaire, the brilliant founder of Vista Equity Partners, who has made a fortune largely in purchasing and selling software firms. Raised in Denver, the child of two parents with Ph.Ds., he graduated from Cornell and later got his MBA at Columbia.

His gift to the Morehouse students is only a small part of his philanthropy, which has included major support for Cornell, his alma mater, and for the National Museum of African American History and Culture, as well as his service as chair to The Board of Carnegie Hall and much more. With this gift, he has set a standard for others of great wealth. He has, as he put it at the Morehouse commencement, “paid it forward,” by freeing the potential of young graduates.

His gift should also rouse Congress to redress the folly of shackling the best of the young generation with often unpayable debt simply to get the education this country says they need. Student loan debt now totals over $1.5 trillion. After home mortgages, it is the largest source of debt, exceeding car loans and credit card debts. Almost two-thirds of all students are forced to borrow to pay for college; they end with an average debt of nearly $29,000.

The debt of African American students is on average $7,400 more than that of White students, reflecting the wealth gap that has built up over years of slavery, segregation and housing and employment discrimination. Democratic presidential candidates like Sen. Elizabeth Warren (D-Mass.) and Sen. Bernie Sanders of Vermont are calling for making public colleges tuition-free. Warren has put forth a detailed plan to pay off a substantial portion of existing student loans. Some like Sen. Amy Klobuchar (D-Minn.) say we can’t afford to do that. But we are a wealthier country than Germany, yet college there is free.

This is a question of priorities not resources. The number of corporations that pay nothing in taxes has doubled under Donald Trump’s tax cut. The cost of that tax cut, most of which went to the already wealthy, is estimated at $1.7 trillion over 10 years. That alone would have been able to pay off all current student debts. Robert Smith’s generous promise should goad all of us into action.

It is a personal tragedy and a national folly to burden an entire generation with often unpayable loans simply to get an education. We all benefit from a well-educated, active population. We all suffer when an entire generation is locked into debt from the day they get out of college. Smith has freed nearly 400 Morehouse graduates from that burden. We should demand that Congress act to offer every student that relief.