Was it a case of racism or bad behavior at Spring Valley High? 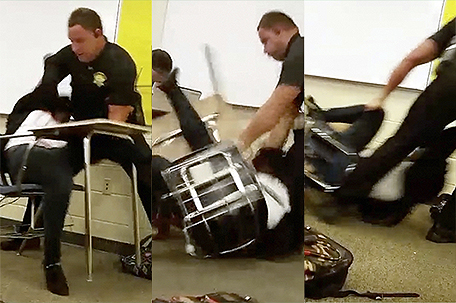 ABOVE PHOTO:  This three image combo made from video taken by a Spring Valley High School student on Monday, Oct, 26, 2015, shows Senior Deputy Ben Fields trying to forcibly remove a student from her chair after she refused to leave her high school math class, in Columbia S.C. The Justice Department opened a civil rights investigation Tuesday after Fields flipped the student backward in her desk and tossed her across the floor. (AP Photo)

The mopping of the classroom floor with a black student at Spring Valley High School by canned South Carolina Richland County Deputy Ben Fields ignited two firestorms. The first was over Fields’ manhandling of the student. This was seen as yet another instance of black students under relentless fire from racist and insensitive school teachers, administrators, and campus police. The demand was that Fields be summarily fired and prosecuted. One out of the two demands was met.

This promptly ignited the second firestorm. His defenders screamed that he was unfairly dumped. He was simply doing his job in taking firm and justified action against a disruptive student and he should have been commended, not reviled. The polar opposite stances on the case again tossed the glare on the raging debate over  how problem students should  be disciplined. It also forced us to ask ourselves why the punishment handed to Black and Hispanic students is so wildly disproportionate to that meted out to white students?

There’s no debate that black students are suspended, expelled, and arrested in the nation’s public schools in far greater numbers than white students. Countless studies and reports show that.

For years, civil rights groups have blamed the gaping disparities in school discipline on racism and say that they’ll challenge school officials nationally to find better ways to discipline black students than shoving them out of  school doors. Many education officials counter that factors other than race explain the disparities in suspensions. Though they don’t spell out what those factors are, the disturbing implication is that black students are more prone to carry knives and guns, pick more fights, act unruly and engage in illicit conduct than whites at schools. Some black students committed these acts, and in almost all cases, they have been disciplined, up to and including arrest and prosecution. But what happens when black and white students commit the exact same offenses? Let’s say the student at Spring Valley High was white and had allegedly refused to put away her cell phone, leave the class when ordered to, and created a classroom hazard?  A number of studies have shown that the discipline would likely have been far different for the white student with much less chance of a suspension, expulsion or arrest than a black student.

A 2014 Department of Education study found that even black students with disabilities aren’t immune from harsher punishment for alleged misconduct. The number of these students subjected to mechanical restraint is double the number of whites for the same or similar offenses.

If school officials grossly overreact to the bad behavior of black students, there are two big reasons. The federal Gun-Free Schools Act, passed in 1994, requires that states order their schools to boot students out for weapons possession in order to qualify for federal funds. (School officials later expanded the list of violations for student expulsion to include fighting and other violent acts.) In California, for instance, the state’s zero-tolerance school laws mandate that a student be expelled for one year for infractions that include drug sales, robbery, assault, weapons possession and fights that cause serious physical injury.

The only exception is if the student that caused the injury acted in self-defense.

The horrific stories of students wielding guns and knives on campuses and assaulting and terrorizing other students have deepened public panic that murderous youths are running amok at schools. School officials zealously enforce get-tough policies to prove that they will do whatever it takes to get rid of disruptive students.

But studies have shown that  the get-tough school policies are badly tainted with racial stereotypes. The danger is that many school officials reflexively view young blacks as violence-prone, menace-to-society thugs. The aim of a zero-tolerance school policy is to send the stern message to students that violent acts on campus will not be tolerated. But does a rigid zero-tolerance policy effectively keep students and the community out of harm’s way? Despite the murderous rampage at Columbine High School in 1999, the rash of shootings at other public schools and the steady tales of crime-ridden, failed inner-city schools, campuses are generally safer than they were a decade ago.

Misbehaving students  must be disciplined. There is no debate on that. However, when black students are slapped with  harsher penalties than whites for similar behaviors, this reinforces the notion that school discipline is more than just a case of punishing bad behavior, but carries a punishing racial double standard. This is why the Spring Valley High assault ignited not one, but two firestorms.

Earl Ofari Hutchinson is an author and political analyst. He is the author of Torpedoing Hillary: The GOP Plan to Stop a Clinton White House (Amazon ebook). He is a frequent MSNBC contributor. He is an associate editor of New America Media. He is a weekly co-host of the Al Sharpton Show on Radio One. He is the host of the weekly Hutchinson Report on KPFK 90.7 FM Los Angeles and the Pacifica Network