US drops the coin on flag bearer at Winter Olympics 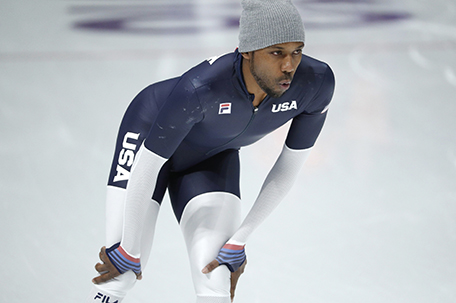 ABOVE PHOTO:  Shani Davis of the United States trains during a speed skating training session prior to the 2018 Winter Olympics in Gangneung, South Korea, Friday, Feb. 9, 2018.  (AP Photo/John Locher)

GANGNEUNG, South Korea — Shani Davis would’ve been a fitting choice to carry the American flag into the Olympic opening ceremony, a superb athlete who helped break racial barriers at the Winter Games.

Someone sure dropped the coin on this one.

The U.S. Olympic Committee, an organization that never passes up a chance to shoot itself in the foot, came up with a voting process that could quite plausibly end in a tie.

It did, of course.

And how was the deadlock broken?

With the flip of a coin.

Whether it was heads or tails, we may never know. But the call went in favor of Erin Hamlin, so the luger  had the honor of carrying the stars and stripes into the stadium on Friday night .

“Maybe the process is a tad flawed,” said Joey Mantia, one of Davis’ teammates on the U.S. speedskating team.

While Hamlin is certainly deserving — she’ll be competing in her fourth and final Olympics at Pyeongchang — her resume pales in comparison. Her only Olympic medal is a bronze. The 35-year-old Davis has two golds and a pair of silvers, not to mention a bunch of world championships and the second-most World Cup titles for any male skater in the history of the sport.

Beyond the stellar results, Davis has been a trailblazer.

Perhaps it’s not surprising that Davis will be joined in Pyeongchang by the first two African-American women to make the U.S. speedskating team — Erin Jackson on the big oval and Maame Biney in short track.

“I don’t think there’s been an African-American flag bearer, ever, for the Winter Games,” Mantia pointed out, quite correctly. “That would’ve been really cool.”

Davis took offense at how it all went down or, at the very least, expressed his frustrations through whoever was running his verified Twitter account on Thursday.

He implied that race played a factor in the decision.

Trouble is, Davis isn’t likely to get another chance at carrying the flag.

He would have to keep skating until he’s 39 to make it to Beijing. These Olympics — his fifth — are largely viewed as the farewell to a brilliant career, even by his teammates.

“It’s sad that Shani wanted it and didn’t get it, and this is probably his last Olympics,” Mantia said, shrugging off Davis’ reference to 2022. “I think he’s just saying that in jest.”

A panel of athletes representing each of the eight Winter Olympic federations selects the flag bearer. After several rounds of balloting, the final round of voting came down to Davis and Hamlin. The USOC, clearly aware a tie was possible, let it be known before the games that a coin flip would be used to decide the winner if that happened.

Such a lazy edict.

Perhaps even more puzzling is why Davis wasn’t the overwhelming choice among his fellow U.S. athletes.

“On paper, it doesn’t make sense for anybody else to do it,” Mantia said. “Nobody is more deserving in my opinion.”

Even Hamlin laughed off the possibility of carrying the flag when it was presented to her by The Associated Press a couple of months ago.

“That always seems to be a really, really big-name person,” she said.

But let’s remember: The choice of flag bearer goes beyond mere athletic accomplishment. It’s also a popularity contest, and the perception of Davis — framed by a prickly relationship with the U.S. media, his long standing decision to train separately from the national team, and a much-publicized feud with fellow American Chad Hedrick during the 2006 Games — might have persuaded some voters to go with Hamlin.

That, too, would be a shame.

While Davis has surely rubbed a few people the wrong way, the vast majority of his fellow skaters talk glowingly about his impact on U.S. speedskating and a willingness to share his wealth of knowledge with the next generation.

“He looks after the younger people like me and gives great advice,” said 21-year-old Emery Lehman, who will be competing in his second Olympics at Pyeongchang. “He’s not selfish at all.”

Let’s hope race didn’t play a factor, but it’s impossible to deny that an outspoken black athlete faces a much greater chance of backlash from a largely white fan base, the mostly white media and, yes, even some fellow athletes who are white.

Those issues, a long time in the making, won’t be settled anytime soon.

But the USOC can come up with a better process for picking the flag bearer.

This should have been a feel-good moment.

It shouldn’t have come down to the flip of a coin.