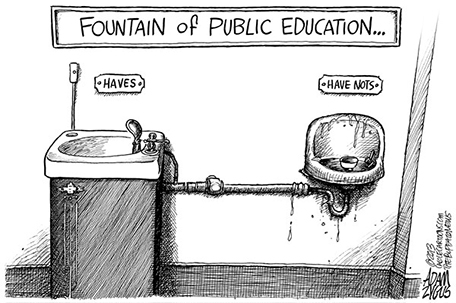 The Black reality in America is that wherever you see large numbers of Black people in any one area, you will find a large concentration of people living in poverty.  Where you start matters and where Black people started in this country can’t be overlooked.

In addition, the cities wehre most Blacks live are saddled with numerous economic challenges related to shrinking tax bases and social issues disproportionately associated with the poor.  These challenges are real and perplexing for political leaders. These cities are challenged to grow their tax bases enough to keep par with the costs of maintaining city services.  These issues are compounded a decrease in state and federal funding and failed urban policy. No matter how you cut it or what your political ideology is, it comes down to basic math – these cities don’t have enough revenue to grow , compete, or cover the growing cost to maintain the city (i.e. safety, healthcare, streets, fire, etc.).  The following represents just two of those challenges.

Because the neighborhoods in which they live are in decline, the education of black children is greatly underfunded. Since real estate tax revenue is responsible for 50 percent of educational funding in some cities this can be problematic. When you have a disproportionate level of people living at/or near poverty levels, not only will real estate values go down, but residents will be unable to pay real estate taxes.  Vacant properties, declining real estate values, and a disproportionate level of children and families receiving social services are all directly linked to a failed education system.

Because of how much it costs to educate a child, and because people in poor neighborhoods can’t generate the tax revenue, Black communities can never catch up.

Business growth is a significant strategy for saving cities, but because the conditions for business investment aren’t adequate enough to sustain or attract new businesses, it’s a strategy that’s hard to do.  Where the problems lie is the conflict over taxes. Businesses need a lower tax structure to make a profit and want to stay. But cities sometimes have to raise taxes to cover the costs of basic needs. Because business has become more global, companies have choices and many times they will go into areas that will give them the best competitive advantage.

In addition to the tax structure, the quality of the workforce is also something businesses consider when deciding to stay or invest in a city. There is a direct correlation between the quality of workforce and the quality of public education. Also, cultural amenities, a vibrant night life and safety concerns are also important things that the decision makers who determine where a business is placed take into consideration when figuring out where to invest.

When businesses invest in these cities, jobs are created and ultimately city revenues are increased.  Access to jobs is critical to addressing many of the issues that urban cities face.  If these cities are to attract or maintain a strong businesses district, they will have to compete with the neighboring suburbs, many of which have better amenities.

There are so many examples that keep cities from growing and when they do, the growth benefits wealthy residents.  Right now, the Whites that fled the cities over the last 50-60 years have been making their way back, thus a trend is emerging of revitalizing downtowns.  In addition to these empty-nesters, so-called “urban pioneers”, young people who have abandoned the suburbs, are deciding to stay and work in the cities after going to college.  Universities and hospitals are also developing programs that provides incentives for employees that relocate into the city, thus increasing a demand for housing. Cities are doing all they can to capitalize on that demand through tax abatements, favorable loan terms, and economic benefits to buyers. Whites see this as their right, privilege and/or business as usual while Blacks, because they lack real and historical capital, see this prosperity as typical in that it will benefit everyone except them.

This economic boom starts to move into traditionally poor and disenfranchised Black neighborhoods that have been designated as blighted, causing gentrification.  These homes are significantly undervalued and ripe for development.  Because Blacks lack capital, they can’t take advantage of these opportunities while Whites are ready to invest in these neighborhoods right away.  For many of them, the historical disruption is secondary to the potential profits.

Gentrification has become the urban renewal term that inevitably leads to urban removal – the displacement of thousands of low-to-moderate income Black people in exchange for wealthier White residents and/or businesses.  When gentrification occurs, not only does the income base increase, but real estate values go up, forcing higher rents and ultimately higher property taxes.  Once homes are renovated or sold, the former tenants, many of whom are Black, are forced out and displaced from these neighborhoods.

Because of the racial overtones associated with gentrification, public officials and politicians are frozen and unable to do anything or do the right thing.  Many of the public policies are so short sighted, ineffective, and biased that they don’t take into consideration the historical significance of what’s going on. Many times those that are victims of gentrification (poor Blacks) are labeled as guilty as if they are unwilling to develop their own neighborhoods when nothing could be further from the truth.  In many instances, they are fighting against all odds to maintain and save their neighborhoods when they have little to no resources because it can be devastating to be forced to leave a neighborhood that your family has lived in for two-to-three generations.

Government must take a stand to protect and preserve  affordability for residents. It must allow the massive tax benefits afforded to developers to be utilized by existing homeowners and renters.  Creative incentives must also be provided to developers of affordable housing and a significant investment in “workforce” housing must also be available.  In my next article, I will describe ways to combat gentrification that are both public and private driven.