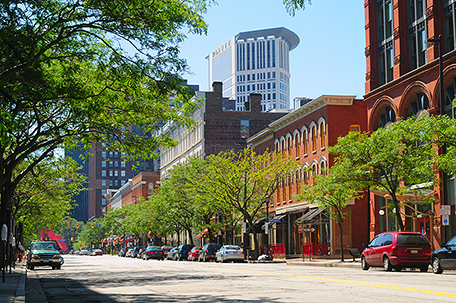 Where you start matters!

For the Black community in America, the economic start has been such that an accepted stigma of inferiority about Black people and Black neighborhoods has been created.

Let’s do the math.

During slavery, the majority of Blacks lived in dilapidated housing on plantations. The only exception to this were those who lived in the slave owner’s house.  These living and working conditions, coupled with the type of food that Blacks were allowed to eat, were absolutely inhumane and unbearable. Yet, they became the conditions that Black men, women and children became accustomed to for generations. Slavery turned Black people into a people whose sole reason to exist was production–activities such as cultivating crops, splitting rails, and mending fences–and from sunrise to sunset, they would work, caring for the children, cooking meals and tending to the grounds of slave owners.

Slave owners viewed accomodations for their slaves as a necessary evil. Very little money was spent on slave housing because its only true reason for existence was to keep the owner from losing too many slaves to the harshness of winter. Slave housing varied from plantation to plantation, but most slave quarters were strategically located behind the mansion or ‘Big House’ to give the owner or overseer a clear view of the slave population, which allowed for easy monitoring.  This housing consisted of one-room log cabins measuring 20 by 20 square feet with brick end chimneys. Each cabin had log flooring and housed an average of eight to 10 people. Some cabins had lofts in which children slept.

Being that close to wealth and luxury while living in squalor yourself had to have a psycological impact on the slaves living on these plantations. While Whites lived in the beautiful homes and stable neighborhoods wealth acquired by slavery could provide, they put their slaves in what could be considered the nation’s first ghettos.

After emancipation in the early 1860’s, Blacks transitioned from the plantations to new ghettos that featured similar housing and similarly unstable neighborhoods. Why do I use emancipation as my baseline? I use it because  this is the first period in which Blacks were supposedly free.  But, since Blacks didn’t own anything and had no wealth or assets, freedom was a relative term. Without more than the limited governmental help that came through the Reconstruction Period, how were Blacks supposed to invest in themselves? After slavery, Blacks owned one-half of 1 percent of the nation’s wealth, a statistic that remains the same today.  In addition to this disparity, two other crippling conditions that emerged as a result of slavery– inferior housing and governmental dependency–are still in full force.

If you take into consideration the many strides that Blacks have made in America despite  being in an economic straightjacket, you must acknowledge our greatness.  Coming out of slavery, Blacks were able to become sharecroppers, farmers, business owners and create competitive neighborhoods in the South. This was despite the fear of lynching and the terrorism of the Ku Klux Klan that contantly loomed overhead.

But once Jim Crow laws were put in place in the South, economics led to The Great Migration and the relocation of Blacks to cities including Chicago, New York, Philadelphia, Detroit, Washington DC, and Boston. Due to economics, they found themselves in economically challenged neighborhoods. Approximately 75 percent of the nearly 45 million Black people in America are still in these cities that resemble the settlements that their ancestors lived in during slavery.

It’s very easy to look at today’s urban conditions and forget how we got here. It’s easy to blame the victim and not the culprit. It’s never been a bed of roses for Black people in America; a people who have been on the defense for the nearly 400 years we’ve been here.  If we use emancipation as the baseline, we can track the progress of Black people over the past 150 years.  For the most part, Blacks have worked hard to secure housing and education and live in good neighborhoods, but it’s been very illusive.  Blacks carry a stigma that is also a legacy of slavery.  For many White people this stigma has promoted a fear of Blacks moving in their neighborhood and that has led to so-called “White Flight” in the years since segregation became illegal.

For many Black people, this stigma has helped to create a deep rooted inferiority about themselves and their neighborhoods. It’s also led to so-called “Black Flight”, in which blacks flee the neighborhoods they grew up in as soon as they have the financial means. Since we have been conditioned to look at life through a Eurocentric prism–equating “good” with White and “bad” with Black–it has stalled our progress. This is even more troubling when Black people don’t know their own history and culture. Even our most learned scholars don’t have the sensibilities or mentality to “do for self.”  I’ve rarely heard that we as Black people should stay and create the neighborhoods we need. It’s  always been about getting out of the ghetto.  This thinking has made America more segregated today than it was before the 1960s.

There are very few blighted poor and disenfranchised Black neighborhoods that have been physically redeveloped while at the same time allowing those residents who have lived there for generations to be able to reap the benefits of a renewed community with higher property values.

Why is that? The answer has its roots in where you start.

Many Black residents have been renters for generations.  This represents a real knowledge and financial gap that I say is a legacy of slavery.  Over the years, the housing stock continues to decline from good to fair to poor and ultimately you begin to have high levels of vacant properties that after years of being uninhabited fall down or must be torn down. These neighborhoods are on the trajectory to reach economic bottom, and that doesn’t even include the psycholgical damage that’s being done to the families living in these neighborhoods.

This decline is exacerbated by the high cost of construction.  Add to that the “ghetto” stigma, which fails to stimulate the demand of the Black buyers who could afford to pay “market” rates needed to justify development costs.  These undesired outcomes will continue until Blacks are able to get in front of the real estate curve and start investing in Black neighborhoods instead of relocating to the suburbs. While most experts believe that good communities are a “mix” of different incomes, our inability to attract Blacks willing to invest has led to “mixed income” meaning high income White people and poor and low income Black people.

The combination of poor education facilities, high levels of crime and violence, lack of commercial amenities and a whole host of other socio-economic issues make these neighborhoods nearly impossible to correct. Current public policies aren’t nearly effective enough to attract mid-to-high income Black people. Many public policy solutions are short sighted, ineffective, and motivated by transactional politics.  Even without political motivation, our current public policy tries to optimize scarce dollars and spread development opportunities around, which leads to the inability to develop sustained, place based development strategies that will create new places over a period of several years and possibly jump-start a stagnant real estate market and give any and all benefits to the lowest income residents , which in some cases produces even poorer communities with a large concentration of poorer people.

This phenomenon is only interrupted when these neighborhoods have strong economic areas and amenities including parks, and good educational facilities. Sometimes, even these neighborhoods need public support to address concentrated blight such as public housing sites. Once those things are removed, real estate values skyrocket and poor Black residents are replaced with high income Whites.

This is classic gentrification and urban renewal becomes urban removal.

Market forces may be color blind, but they are also brutal. With public support and treatment of the hardest blight, a neighborhood that is adjacent to massive economic assets with unlimited access to wealth and capital, multi-year tax abatements and low mortgage rates, the real estate ceiling can be lifted and higher property values can cause an economic tsunami that most people of color are unable to survive.

In addition to addressing several of key issues including education and public safety, a strategy must be implemented so that traditional Black communities can remain. We call it the Universal Plan.

No mistake about it: Historian dispels the myth that American ghettos are an accident