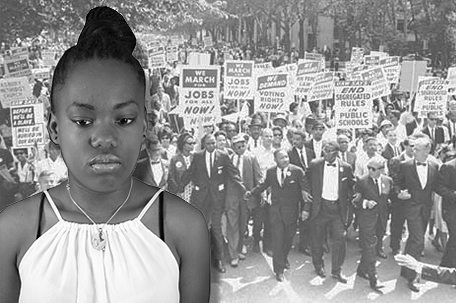 The late Rev. Dr. Martin Luther King, Jr. author of the “I Have a Dream” speech, is recognized as one of history’s greatest Americans

But despite the the media tendency to portay King as a pacifist whose vision for the country stopped at his dream and required no accountability from the country in which it was created was a fighter who cared so deeply for his people that he put it all on the line for all of humanity, America, and specifically Black Americans.

King’s dream wasn’t about hoping that things would change; in fact it was just the opposite. The “dream” is a metaphor for a vision; a vision communicated to him by the Creator. Many religions say that dreams come from three places:  The subconscious; the Creator; or the Devil.  Dreams have also been credited by many artists as being the source of their creativity and are often deeply symbolic.

Dreams represent the most mysterious and interesting experiences in our lives.  There has always been a keen interest in the analysis and interpretation of dreams. While we forget most of our dreams, there are times that our dreams become pivotal and definitive moments in our lives.  I’m very fortunate to be able to dream every time I fall asleep and even sometimes during the day. My dreams are usually about my work, family or our people and in them,  I’m usually confronting the daily challenges of my life. Many times, I see the solutions to many of our problems in my dreams.  Dreams are powerful and few were more powerful than King’s.

King’s words are a driving force for my spirit and when I have a moment to think about it, it fill my eyes with tears. His words aren’t the words of a pacifist. They are the words of a prophet, a genius, a champion and a freedom fighter who was connected to a Higher Power. King’s dream is the vision for all humanity; a humanity that includes Black people, thus making them deserving of the benefits that Almighty God bestowed.

But what has been done to Black people by Whites is immoral and just wrong.  The only reason that this was allowed to happen and last for as long as it did  was for the love of money, something that has  corrupted people to the point that people will do almost anything to get it.

Slavery was motivated by pure greed and a deep and poisonous love for money.  There are many other struggles by individuals and groups and the “good guy”, in this case, the oppressed, don’t always win. One group can inflict pain and oppression over another group without any apparent consequences. This was the plight of Blacks in America for the past 400 years and in some ways it continues to be so.

If we have any faith in the natural order of things (God), there have to be real consequences for certain actions.  There are some who believe that there is a Heaven and a Hell.  Heaven is for those people who uphold the laws of God and hell is for those who don’t. While this is a very simplified interpretation, it doesn’t make the battle between good and evil any less real. Freedom isn’t free and sometimes peace can’t be achieved without struggle.

King’s dream was about taking on this fight and destroying the myth of racial superiority.

There is but one world and one people. There is no superiority of one people over another based on the color of one’s skin.  What distinguishes one group from another is its good and bad deeds. This was the fight that King waged for most of his short adult life.  From the years of torture, brutality and inhumane treatment of slavery, racist Jim Crow laws to the institutional racism of today, King’s vision called for the Black community to sacrifice and fight until victory was ours.  His was the dream and spirit that kept millions of our Black ancestors hopeful that someday we would be free, be able to vote and control our own destiny.  No one is going to do this for us. We must do it for ourselves.

Dreams are the foundation for vision and hope. Unfortunately, time is running out for the Black community to come up with a solution that will begin to put us on track to solve the myriad of issues we face. Unless this happens and happens quickly, Blacks will become a permanent underclass in America.  Because today’s youth lack the knowledge of the Black man’s struggle in America, they have no idea of how to combat this, which will result in potentially severe internal doubt and pervasive hopelessness.

Like the fall of the Berlin Wall in 1989 that signaled the symbolic end, but not the actual end, of the Cold War, such things as the Voting Rights Act were only the beginning of the quest for Black equality in America.

Because of the very minor gains of the Civil Rights Movement, the Black community has become sissified over the last 50 years. There is real work that needs to be done because the gains produced weren’t nearly enough to address the disparities that Black people face as a result of where we started in America, desparities incapable of being repaired in a single decade.

While racial bigotry and prejudices have been challenged openly, massive levels of bias remain. Discrimination is rampant, and racism is still alive. Due to nearly 50 years of social inactivity, our community is asleep, thus our challenges continue to grow.  We continue to be damaged by inferior housing, inferior education, inferior food, and inferior thinking. Our inferior thinking is tied to a fundamental belief that someone else is going to do for us what we must do for ourselves.  Not one gain that Blacks have achieved in this country was a gift; all of them were hard fought wins. During those struggles, we lost time, wealth, dignity, and many times our lives for these very basic gains.  Even today, instead of achieving more, many of our previous gains are being rolled back. Our disconnection from our past, our inability to understand King’s dream and our inability to dream has significantly contributed to our hopelessness and collective paralysis. The most educated and successful among us opt for assimilation in an attempt to be accepted.

In other words, as a group we’ve taken our eyes off the prize…and because of this, King’s dream is no closer to coming true.

“Stop and Frisk” has to stop!

Atheism in the Black community