Universally Speaking: We must establish our own economic agenda; we are at a significant economic disadvantage (Part 3) 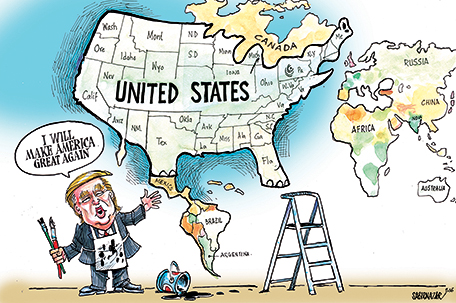 I don’t subscribe to the theory that “Things can’t get any worse, therefore we shouldn’t do anything.”  If the first two weeks of Donald Trump’s presidency should tell you anything, it’s that things are about to get much worse and that this foolish concept is on the verge of being blown to pieces.  With full control of Washington, President Trump, with his puppet heads of the House and Senate, is ready to gut everything with any semblance of protection for minorities, consumers, and specifically African Americans.  Women’s rights, worker’s rights, human rights, civil rights, environmental rights, immigrant rights, and religious rights have all been targeted by this administration.

To win the election, Donald Trump galvanized a White nationalist sentiment that measured everything through the eyes of White Men, with anything or anyone not White and Christian classified as anti-American. This is why America is more polarized now than it has been in some time.  Unfortunately, for the poor, working poor, and even middle class Whites, they will find that Trump has played them in the same way that racists of the past did by pitting them against everyone who wasn’t them. Even if you are poor, being White gives you a higher position.

Donald Trump has assembled a group of billionaires with the only agenda being the total control of this government and economy for their benefit. It’s all about getting and controlling the resources. Trump has absolutely no intention of serving low-income or working class Whites because his master is the White capitalist billionaire. The saying goes, “you can’t serve two masters”.  In this case, those masters are billionaires and poor people and you can’t serve them equally because they have diametrically opposed agendas. How can you protect the rights of workers when you believe the employer’s needs are paramount? How can you protect the environment when you’re in bed with the energy companies that want to rape the earth for a larger profit? How can you protect peace when the Military Industrial Complex is your partner?

I hate to sound like an alarmist, but the Republican backlash against the Democratic leadership and former President Barack Obama is real and will be extremely consequential to the Black community. There is much more at stake than Obamacare and the Obama legacy. These people are positioned to reverse every gain we have achieved over the past 60 years and if they are successful, it will take another 25 years to get them back.

When they say they want to “Make America Great Again,” which America are they talking about? What time period? Based on the team Trump has assembled to lead the country and the policies they are implementing, they are trying to go back to the period when White capitalist men had absolute control and because of their wealth, power, and racist views, could do almost anything that benefited them and their bottom line. Trump has given this minority group complete control and unlike others, they are playing for keeps.

A strong and independent media working with the legislative and judicial branches of government could weaken and even stall the Trump agenda. However, not only is our media not objective, they have been co-opted by the Trump Phenomenon and are unable to hold this man accountable to basic facts.  If there is no real-time fact checker like the media, and the other branches of our democracy have been bullied into submission, we wind up bogged down in superficial things while these people are moving their agenda along.

This mode of operation represents a serious threat to the African American community and our ongoing struggle in this country. We don’t have the capacity to challenge the shenanigans that he puts forth.  In addition, Black people are so passive that many in our community don’t believe that these people are really what they say they are. These people are not playing.  Their playbook is for keeps and now they have control and public support in spite of all the protests.

Donald Trump and his billionaire gang now control the largest military in the world and can use it to threaten other countries in ways that they never have before. They also have the Central Intelligence Agency, the Internal Revenue Service, the Department of Homeland Security and the Attorney General at their disposal to deliver on their agenda. The White Supremacist agenda of the Republican Party has become even more frightening than I originally feared it would be, so everyone needs to buckle up because things are about to get worse both domestically and internationally.

These people are winning because they have an economic agenda that gives them the power and capacity to implement all other agendas. Don’t get it twisted – the economic agenda is primary.  What will it take for the Black community to understand that their agenda doesn’t include us?  The belief that the oppressor will one day have the heart or inclination to go against their fathers and ancestors and repay Black people economically for all they have done is a fantasy. They have one goal and one goal only and that is to use Blacks as economic slaves.

The Black community in America is losing politically and economically because, for the most part, we have connected our agenda to the Democratic Party, so when they lose, we lose.  Because of the advantage that White people have, especially over Black people, these political losses don’t hurt them as much. But when Blacks lose, they really lose.

We have no central leadership or even consensus on what strategy works.  Because they control everything, the enemy of the Black man is automatically better organized. How is it that we expect to compete with them in some “organic” and “soft” approach without the highest level of organization and centralization? We are fooling ourselves to believe we can. What is the Black agenda?  I considered myself politically astute and I don’t yet know exactly what the order of today is.  It’s unclear because the Black leadership is so divided that we haven’t presented a clear agenda, and what we have presented has been marginalized or hijacked.  Let’s be perfectly clear, when we have too many agendas or people representing our agendas we, in effect, have no agenda at all.

Sure when you’re in the struggle, you align yourself strategically with others to build a critical mass to effect change, but you must also be prepared to advance your own agenda despite what others do. When we choose to align our agenda with others, it is mainly because we lack the resources to manage our own agenda in spite of the claim by some that we have all of the resources we need.  I see no evidence of this and I think I can make the argument that we don’t have enough resources and if we do, then perhaps the narrative about us is correct.  When you rely solely on others to advance your agenda, as we continue to do, your agenda takes a back seat and very rarely addressed. This is why many of our issues go unresolved. Because we’re all competing for the same resources, what happens is that our agenda never comes up when all parties come to the bargaining table.

The Black agenda must be about economics first, second, and third. This must be front and center and not coupled with any other agendas, especially if the Black community doesn’t lead or control the organizations that have the responsibility to advance their agenda.  Our issue is about the lack of resources and, therefore, the lack of power both individually and collectively.  Since emancipation, the petitions of Blacks to the federal government for reparations for the years they toiled as unpaid labor have never been resolved.

This struggle continues because the legacy of slavery is the economic disadvantage that this American institution created for Black people and their children. If our ancestors had received wages for their labor, they too could have bought what they wanted, invested it as they desired, or given it to churches or schools or charities. Being unable to do this has crippled the Black community.  Whenever comparisons are made between Blacks and immigrants in terms of group progress in this country, the economic and structural damage done to Black people through slavery and Jim Crow is never acknowledged.

The case for reparations to the descendants of enslaved Blacks is clear, but has continuously been challenged.  Captured Africans were brutally shackled and packed head-to-foot below decks in slave ships that trailed blood and corpses across the Atlantic Ocean for nearly 300 years. Those who survived the brutal journey were forced to work under the most inhumane and horrific conditions from dawn to dusk usually seven days a week until they died.

The American institution of slavery embraced the depravities of theft, rape, torture, and murder and when it ended, something not altogether dissimilar followed. Those who tried to escape were hunted down, tortured, and often murdered. Males, for punishment, were often severed of their genitals. Women were systematically raped. The depravities of theft, rape, torture, and murder are atrocities in all societies yet totally ignored for Black people. We as a society must own this truth. Even today, we have the mass incarceration of Black men that has the same social and economic impact as slavery on the Black community.

During this same period while our ancestors were in chains, America was building our now $100 trillion economy with systems and institutions that support and protect the status quo.  It’s extremely dishonest to disconnect the current social and economic conditions and the massive disparities of the Black community with our enslavement and our start in this country.  Sure, there are challenges to how the repairs should be done, but these challenges are not part of today’s discussions. America spreads and promotes democracy and the “high moral ground” all around the world and fails miserably when it comes to its treatment of Black people.

As of today, Congress hasn’t been able to pass a bill that would even allow the body to study the impact of slavery. The bill to do this has been introduced every year for the last 30 years to no avail. America won’t even acknowledge the damage that was done and this is the highest level of hypocrisy.  The debt that America owes to the Black community is real and remains outstanding and we must make this our highest priority.  The Black community, unlike any other group, is a unique group with unique circumstances, which require a unique economic solution

Message to the Black Community Universally Speaking: There are real consequences to this Presidential election – Part 1