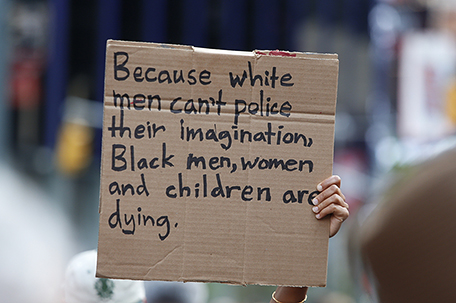 ABOVE PHOTO: (a katz / Shutterstock.com)

I am truly saddened by the extreme level of violence that exists in America, which I believe has become a big part of our culture.

America has had a long history of exhibiting extreme levels of violence especially when it comes to Black and Native American people.  Even though violence has always been a part of American culture, the domestic violence we’re experiencing in America today is at an all-time high. If not addressed, it will continue to wreak havoc and ultimately work to undermine and weaken our civil liberties.

Unfortunately, the violence affects the Black community at an alarming and disproportionate level.

Americans of good will must ask ourselves what impact this level of violence have on our society if it continues to go unchecked.  We must ask ourselves who benefits from this type of violence and the uncertainty and discord that it creates.  We live in a state of ignorance that permits the exploitation and politicization of hate and indifference.  If this violence is not immediately addressed, it will further embolden the cancer of ignorance and will continue to destroy America from within, ultimately threatening America’s ability to maintain its global leadership around the world. This ignorance will handicap future generations of Americans if not addressed now!

Let me go on the record by saying that I denounce violence of any kind and the bigotry, structural racism, ignorance, and poverty that are it’s foundational pillars. I wholeheartedly denounce the assassination of the five police officers in Dallas, the hundreds of unarmed Black men killed primarily by White police officers and the  thousands of Black deaths that are perpetuated by other Black men living in America.

Guess what America? We are  all in this together whether we like it or not.

Blue states, red states, Democrat, Republican, Liberal, Conservative, Black and White, we all need to band together if America is to thrive and continue as the leader of the free world. We cannot continue to harbor and promote ignorance that is steeped in polarization and race baiting. We also can’t continue to support the ignorance that supports racism, further divides the haves and the have nots,and is void of basic common sense, moral certainty, charity, truth and respect for your fellow man.

The reason the call “Black Lives Matter” is being heard around the country is because they never have in this country.  There are some among us that say by their words and actions that White life is greater and more important than all others, thus violence aimed at Blacks is acceptable while violence against Whites is not, This position is absurd. I denounce all types of violence and loss of any life except when absolutely justifiable. All life is precious and valuable.  The men that died last week, two unarmed Black men at the hands of White police officers and the five police officers that died at the hands of a Black man are all “victims” of violence.

Why are they victims?  They’re all victims because they were all fathers, sons, brothers, uncles, and husbands and each of them left home that morning expecting to return home safely to the families. They did nothing, absolutely nothing, to justify being murdered. They were innocent victims of senseless violence and their deaths represent a serious and significant level of pain and loss incurred by their families and communities that each family and community will mourn going forward.

When it comes to the violence that happens on a daily basis, Americans have very short memories that have allowed these atrocities to happen more and more frequently. We don’t seem to be able to do anything about it. Ignorance is at the forefront of many of these acts. We endure challenge after challenge, become outraged for a few days or weeks and then we go back to our normal behavior and forget the carnage that these violent episodes create.

But the families and communities directly impacted by the violence don’t have that luxury.

In 2015, there were an estimated 600 cases of Black deaths at the hands of police in America and it looks like those numbers will be repeated for 2016. What makes this so astonishing is that in many of those cases, the dead were unarmed. This isn’t something new for the Black community because it’s been going on forever and the trauma incurred by the families and communities of the victims has not only ever been treated, but never even acknowledged. This trauma generates a “built-in” defense mechanism that is inherited by the next generation. This type of violence by police against unarmed Black men has sparked a national movement for police reform.

For Black people, this violence is just another form of oppression.  There are some prominent White leaders who call “Black Lives Matter” a racist group that further divides our community, which is a blatantly ignorant statement.  Malcom X once said, “The oppressor will never feel the pain of the oppressed.” When you have study after study that shows that Blacks in America are in a real crisis and continue to lose ground in nearly every category, to identify those who protest as racist is irresponsible.  It is clear that the Black community in America is oppressed and has been since the enslavement of Black people nearly 550 years ago.  It is equally clear that the oppressor is White America.

Today, nearly 50 years after the historic Civil Rights legislation of the 60’s, economic conditions and structural poverty for too many Black people threatens every aspect of life that will continue for untold generations. Like wealth, I contend that poverty is inherited, where one starts in life is extremely important and Black people have never had the opportunity to inherit or create wealth because they were never compensated for their slave labor. Dr. Martin Luther King, Jr. once stated that the worst form of oppression is poverty and by this definition, America’s Black community is oppressed. The more I study these conditions, the louder Malcolm X’s quote rings in my head.

The descendants of the slaves and slave owners must be able to talk from a set of truths if we are to make progress in this country.  America must understand how current generations of Whites have benefited from the privilege resulting from the oppression from which Blacks continue to suffer. It’s time that the White community accepts that their inherited benefits have come at a cost to Black people.

After countless struggles, marches, riots, demonstrations, and the passing of civil and voting rights legislation, Black Americans have entered the new millennium the same way they entered the previous four centuries – impoverished.  Blacks still bear nearly 10 times their proportional share of poverty and all of its nasty derivatives, such as broken homes, drug abuse, incarceration, and unemployment.

What we really have seen in America is social, not economic, integration.  As Dr. Claude Anderson said, “It is extremely difficult for Black people to progress when the same hands that held the whip still hold all of the wealth and power.”  Maybe this is why the oppressor will never feel the pain of the oppressed.

If we expand our description of violence to include all forms of oppression, the Black community is under siege in America. If anything positive can come out of the recent rash of violence, it is that we can finally begin to place the discussion about America and her future on public display with the hope that we can come up with real and tangible solutions.  Today in the media, you hear of people wanting to address this violence not with a Band-Aid, but with solutions that address its root cause.

The root cause directly relates to the role that Whites played in overwhelmingly stacking the deck that confronts most Black people today.  We can no longer downplay the reality that White America has amassed trillions of dollars in wealth and has created an economic system that protects those with wealth, leaving the Black community an inheritance of poverty.

We have a major problem with race relations in in America that we will not be able to overcome through police force or incarceration. This is just another form of violence and oppression.  This problem has its origins in a past that we must address through critical dialogue or we will never be able to fix the problem.  White supremacy and White privilege is alive and strong.

In my upcoming articles I will elaborate further on why America must come to grips with it’s past in order to move forward in the future.

Universally Speaking: We Must Have a Renewed Hope and Faith in 2017